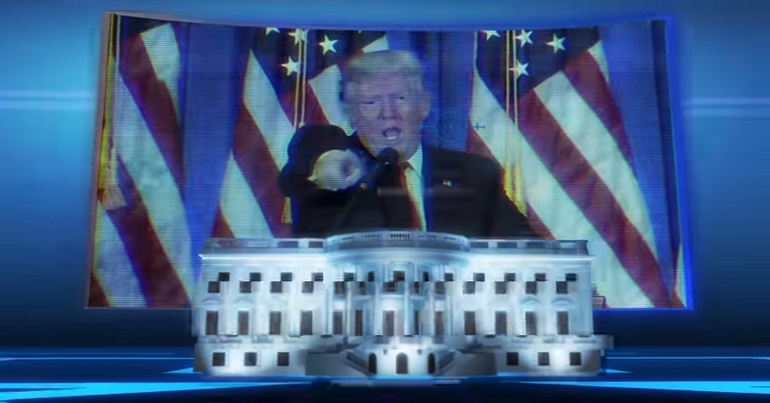 The Empire Files is a renowned documentary series hosted by independent journalist Abby Martin. And it has now officially announced that it has had to go off air due to the effects of US sanctions on Venezuela:

BREAKING: Empire Files statement on shut down under US sanctions:https://t.co/pfWLqrVQ0L

The groundbreaking documentary series has been a breath of fresh air with its unflinching critique of capitalism, imperialism, and corporate state terror. Episodes include reporting from Palestinian refugee camps; discussing massacres with farmers in the US-Colombia ‘drug war’; and embedded reporting with right-wing protesters in Venezuela.

Unlike many shows, Empire Files keeps all its episodes freely available post-broadcast.

According to a 22 August statement:

The Empire Files, which airs on TeleSUR throughout Latin America and on Free Speech TV and The Real News Network in the United States, has been funded through a contract with the TeleSUR network.

The headquarters of left-leaning TeleSUR are in Venezuela, and it receives funding from several Latin American states.

On 16 August, The Canary reported that Occupy London was the “latest Pro-Palestine page to disappear from Facebook” and that:

The Empire Files has held off from reporting on its funding problems until now:

For over a year, funding has been sporadic and often delayed. The Empire Files has been operating by alternating between waiting for late payments and funding production out-of-pocket.

But the economic assaults on Venezuela (and TeleSUR), which began under former US President Barack Obama, have reached “new heights” under Donald Trump.

In March 2018, economist Mark Weisbrot from the Center for Economic Policy and Research explained that:

These sanctions cut off Venezuela from billions of dollars of potential loans, as well as from revenue even from its own oil company in the US, Citgo. They have worsened shortages of medicine and food, in an economy that is already suffering from inflation of about 3,000 percent annually and a depression that has cost about 38 percent of GDP. These sanctions are illegal under the Organization of American States (OAS) charter and under international conventions to which the US is a signatory.

Some people have immediately pointed out that the censoring of TeleSUR and The Empire Files is a result of these US sanctions on Venezuela:

Totally outrageous: As a result of US sanctions against Venezuela, @EmpireFiles has been forced to completely shut down operations.

The Empire Files is one of the best and most important journalism shows out there, and it now has been effectively censoredhttps://t.co/ZxMWtYcSBQ

The attacks on TeleSUR by the US government have apparently also affected wire transfers from other Latin American states.

The Empire Files had to shut down before completing its latest programme on Palestine.

After a coordinated assault against voices challenging US imperialism, Trump’s sanctions have effectively shut down @EmpireFiles. Please help us keep going, there’s much more work to do! https://t.co/HGdGneBJxx

The Empire Files is now seeking donations to help keep it going:

We were forced to shutdown just after we hired a stellar team of journalists in Gaza who sent us incredible, unseen footage & interviews from the Great March of Return https://t.co/ejRQGje9Uz

US sanctions on Venezuela are not only making the country’s economic difficulties much worse. They’re also helping to silence independent media.

We must resist this assault at all costs.

– Support the work of The Empire Files with a one-time donation or as a monthly sustainer.