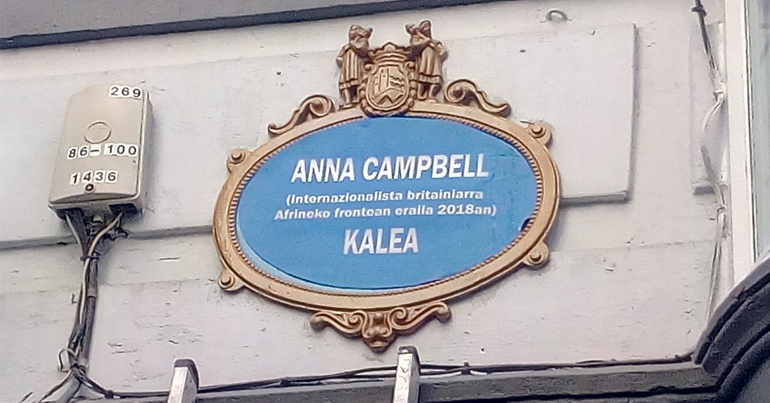 A street in Bilbao has had its name changed in memory of British woman Anna Campbell. Turkey killed her in the formerly Kurdish-held region of Afrin in northern Syria (aka Rojava) while she was fighting with the local women’s defence forces (the YPJ).

Bilbao’s annual Aste Nagusia festival, or ‘Big Week’, began on 18 August. For its duration, a group of “basque internationalists” unofficially changed street names. This is to honour people that have died fighting for a better world. And this year, anti-terrorist fighter Anna Campbell is one of those people:

Anna Campbell internationalist fighter killed in Rojava, Kurdistan. Her memory leeds us in our struggle against capitalism and for the rights of the people. Now she has a street with her name in Bilbo, Basque Country #MekauenEguna pic.twitter.com/4OMaONIzSa

The plaque describes Campbell as an “internationalist” fighter. This term is given to the estimated dozens of foreigners that have gone to Rojava to support the progressive political system there and help defend it from the terrorists who attack it. Their participation echoes the international fighters that helped anarchist and communist forces during the Spanish Civil War.

The group has also renamed four other streets in 2018. They are:

Speaking to The Canary about why they change street names, a spokesperson for the group said:

We are mostly militant internationalists who work during the year with solidarity with Palestine, Kurdistan, anti-globalization, against multinationals. At parties in Bilbao we want to reflect the work done. The change of streets is done in a fun way, by day, with music. The names are chosen for their actuality or their symbolism and taking care of the visibility of women.

A Turkish missile killed Campbell on 15 March while she was helping to defend Afrin against a Turkish-led invasion. Her body is still in Rojava, but her memory has continued inspiring people around the world. There have been banner drops, murals, protests and many other forms of action in her memory. And Bilbao’s renamed street is just the latest.

Since taking control of Afrin in March, Turkey has been widely criticised for involvement in human rights abuses.