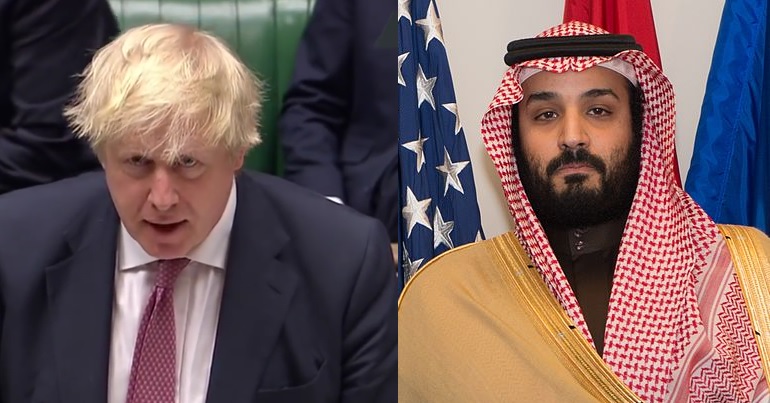 The UK government has snuck out a sickening plan to “work with” the Saudi butchers in Yemen. The UK is essentially joining the Saudi-led coalition in its assault on the impoverished, brutalised country as the UN warns that 10 million more people in Yemen could be on the brink of famine by the end of the year.

So the UK is joining forces with a country largely responsible for the possible starvation of 18.4 million people.

Foreign Office minister Lord Ahmad of Wimbledon put out a written statement on 23 May. In it, he relayed a statement by foreign secretary Boris Johnson. The focus of the foreign secretary’s statement was Yemen. In particular, he detailed the ‘threat’ posed to Saudi Arabia by the Houthis – rebel forces in northern Yemen. Johnson wrote:

Saudi Arabia continues to be the subject of regular missile attacks from the Houthis in Yemen.

Johnson also reaffirmed the UK’s commitment to Saudi Arabia’s “security needs”. And he said it is in the UK’s “national interest” to stop the Houthi attacks. To that end, he revealed:

The UK has now agreed to work with the Saudis to mitigate the threat from these missiles. This will involve UK personnel providing information, advice and assistance limited to this particular objective.

A number of countries have ‘worked with’ Saudi Arabia in its assault on Yemen. As such, they’re considered part of the Saudi-led coalition. But Johnson clearly doesn’t want the UK to be put in that same category. Because he went on to say:

To be clear, the UK is not a member of the Saudi-Led Coalition. We do not have any role in setting Coalition policy, or in executing air strikes. All UK military personnel in Saudi Arabia remain under UK command and control.

Being in the Saudi-led coalition means that the responsibility for the actions of the coalition, including Saudi Arabia’s, lands at your door.

Note how UK maintains the pretence that it's “not a member of the Saudi-led coalition” in Yemen war. I’ve long assumed this is for legal reasons, because they know they could be held complicit for war crimes. https://t.co/uOWPjIsuvK pic.twitter.com/38R5QS22oJ

Following the UK’s quiet announcement, the United Nations (UN) also put out a statement on Yemen. Mark Lowcock, under-secretary general for humanitarian affairs and emergency relief coordinator, made a shocking prediction about the country:

More than 22 million people in Yemen need humanitarian assistance or protection. Some 8.4 million people are severely food insecure and at risk of starvation. If conditions do not improve, a further 10 million people will fall into this category by the end of the year.

Yemen was already one of the poorest countries in the world before the conflict began. And since 2015, when Saudi Arabia started its brutal military campaign in the country (after the Houthis overthrew Yemen’s ‘president‘ in 2014), that poverty has grown exponentially worse.

Thomas Friedman ignored the US support for the Saudi's genocidal war against Yemen. What the US, UK and Saudis are doing to the poorest country in the Arab world is a horrifying crime with specific culprits who must be named: https://t.co/B6mpb0G9Dk

Meanwhile, the conflict has claimed thousands of lives and contributed to almost half a million [pdf] children being robbed of their education.

The UK government has regularly come under fire for its extensive arms sales to Saudi Arabia, in light of the Yemen assault. But it has faced no real consequences for doing so, either at the ballot box or in the courts.

The government appears to feel emboldened by the fact that it’s got away with its role in, well, murder. So much so that it’s now embedded itself deeper in the conflict by announcing it will “work with” the Saudis regarding the ‘missile threat’ from Yemen.

This revelation is, however, likely to bolster further legal action against the government. Let’s hope so. And let’s pray it inflames people enough to take action at the ballot box too.