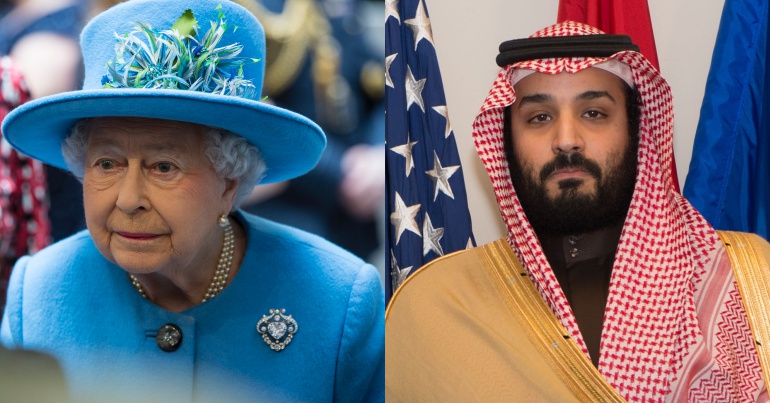 On 7 March, Saudi Arabia‘s crown prince Mohammed bin Salman will visit London. He will have lunch with the Queen, dinner with the Prince of Wales, and meetings with the prime minister and key government figures. He will walk on the “reddest of red carpets”. But these red carpets are red with the blood of innocent civilians and children. As The Canary previously reported, there are many reasons to support the protest opposing this state visit.

Since the announcement of bin Salman’s visit, opposition has grown. A petition called for Theresa May to cancel the visit because:

The Saudi Arabian regime has one of the worst human rights records in the world. Torture and arbitrary detention are widely documented. In 2017 alone, over 100 people were executed.

The government’s response rejected this call because the:

Longstanding partnership between Saudi Arabia and the UK has helped make both of our countries safer and more prosperous.

But a statement endorsed by 11 groups – including the Stop the War coalition, Campaign Against Arms Trade (CAAT) and the Peace Pledge Union (PPU) – said:

the Saudi regime’s autocratic rule and obvious destabilising actions in Yemen, Bahrain and other countries in the region serve to influence the sort of extremism that threatens the UK.

And as bin Salman’s visit begins, criticism has grown, not least because of the ongoing war and humanitarian crisis in Yemen:

"Right now, #UK made fighter jets are being flown over #Yemen by UK-trained military personnel and firing UK-made bombs and missiles."

Up next: Is the government right to roll out the red carpet for the #Saudi crown prince while his country stands accused of crimes against humanity? #SaudiPrinceNotWelcome #SaudiCrownPrinceVisitUK pic.twitter.com/jZfBfQLgGB

So looking forward to the Conservative government covering for and defending his brutal war on Yemen https://t.co/13vPCNoxIc

Labour leader Jeremy Corbyn was unequivocal in his criticism of bin Salman’s visit. He said:

There has been a sharp increase in the arrest and detention of dissidents. Torture of prisoners is common… Unfair trials and executions are widespread, as Amnesty International confirms. As she [Theresa May] makes her arms sales pitch, will she also call on the crown prince to halt the shocking abuse of human rights in Saudi Arabia?

“As she makes her arms sales pitch, will she also call on the crown prince to halt the shocking abuse of human rights in Saudi Arabia?” @jeremycorbyn as he asks @theresa_may about Women’s Day and arms sales #pmqs pic.twitter.com/91h60XAltd

While in London, bin Salman is expected to “chase deals that could be worth as much as $100bn”. The BBC reported that the UK is “keen to persuade the Saudis to float part of their massive state oil group, Aramco, on the London Stock Exchange”. But the UK has also approved:

more than $6.4bn in arms to Saudi Arabia since the start of the war in Yemen in 2015, including advanced jets and munitions.

According to Middle East Eye, arms deals between the UK and Saudi Arabia are even more extensive. Allegedly:

the [UK] government has actively overseen a more than 75 per cent increase in the use of secretive ‘open licences’ to approve additional arms sales to the kingdom, including vital parts for the jets striking targets in Yemen.

A public relations campaign has also emerged across London, appearing in The Times and in “partnership with the Department for International Trade”. This seems to be an effort to counter criticism of Saudi Arabia during bin Salman’s visit:

Adverts on billboards, vans, in almost every paper physically & online, a weird mob who turned up at Buckingham Palace with identical flags…#Saudi are spending a lot of money on trying to make their Crown Prince not look like a despotic torturing repressive war criminal. pic.twitter.com/PN6qvPsYfd

According to this campaign:

Saudis appreciate the British. Like them, we are understated and we have the same affections for politeness and a ‘friendship first, selling second’ approach.

But this won’t stop the protests. As Symon Hill from the PPU told The Canary:

We are protesting not only against bin Salman’s role in the killing of thousands of people in Yemen, but the role of the UK government and army in perpetuating Saudi atrocities. British weapons are used against civilians in Yemen, and British troops are training the Saudi troops who are waging this vicious war. Far from promoting democracy, the British government and its armed forces are upholding tyranny.

As they welcome bin Salman, the UK government and royal family are showing support for the regime in Saudi Arabia. And in doing so, they are complicit in the deaths of thousands of people and the suffering of thousands more. The red carpets are red with blood.

This collusion, under the banner of trade, must stop.

– Jon the protest if you are in London