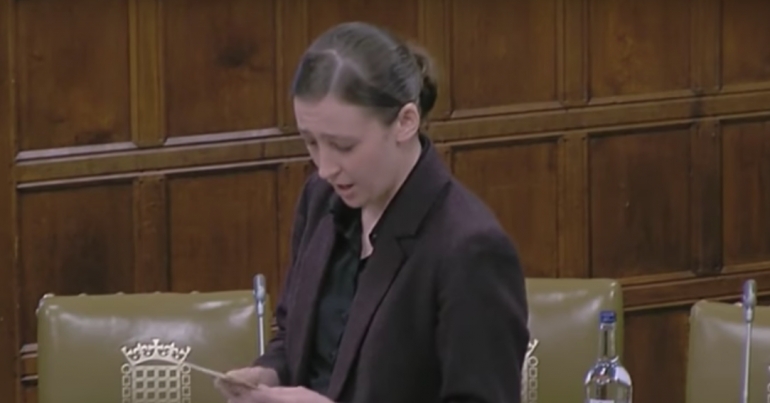 Scottish Nationalist Party (SNP) MP Mhairi Black became the first politician to use the word ‘c***’ in parliament. Speaking about misogyny, she highlighted the disgusting abuse she’s received online. And for being completely open and direct about these sexist comments, and for her passionate speech in general, she’s being called an “inspiration” by many people.

Please be aware there is strong language throughout this video. My speech today in Misogyny as a Hate Crime debate. pic.twitter.com/PmyWmPhr4O

The problem of misogyny

The MP for Paisley and Renfrewshire South was speaking at the Misogyny as a Hate Crime debate. In order to underscore the problem of misogyny, she told fellow politicians how she experiences sexist abuse on a daily basis:

I struggle to see any joke in being systematically called a ‘dyke’, a ‘rug-muncher’, a ‘slut’, a ‘whore’, a ‘scruffy bint’.

I’ve been told that ‘you can’t put lipstick on a pig’, ‘let the dirty bitch each shit and die’.

I could soften some of this by talking about the C-word, but the reality is there is no softening when you’re targeted with these words and I’m left reading them on my screen every day, day in day out. ‘She needs a kick in the c***’, ‘guttural c***’, ‘ugly c***’, ‘wee animal c***’. There is no softening just how sexualised and misogynistic the abuse is….

I’ve been assured multiple times that I don’t have to worry because ‘I am so ugly that no one would want to rape me’. Now all of these insults have been tailored to me because I am a woman, as a woman.

Her powerful words struck a chord with many Twitter users:

Well said. 👏👏👏. I show my daughters your speeches, you are an inspiration. Keep on doing what you're doing. People attack you because they fear You.

Brave and intelligent yet again @MhairiBlack is an inspiration https://t.co/f5DCnnO0xB

What a speech. You continue to be a inspiration to millions out there. Thank you.

I applaud you for calling misogyny out. You continue to inspire and provide a voice and confidence to those who struggle. I support this being a hate crime. #everydayhero

The hon. Lady [Black] is talking about misogyny. Can we take it as read that she thinks that misandry ought to be a hate crime, too? If she does not, will she explain why she thinks there should be one rule for one and another rule for the other?

There is a power imbalance in society that disproportionately affects women negatively, so I think misogyny should be an exclusive strand of hate crime.

Daily Mail columnist Quentin Letts had a quite different response to Black’s speech. The article he wrote on it for the paper had the headline: Mhairi Black made an unsisterly bid for the limelight by dropping the C-word in a speech. Letts was also present at what he refers to as the “ban wolf-whistling debate”. And on Twitter, he had another dig at the SNP MP:

Went to the 'ban wolf-whistling' debate just now. Few there. Mhairi Black (SNP) gave a speech full of rude words but I'm not sure anyone fully understood them. It's not an easy accent.

Reducing misogyny to wolf-whistling diminishes the nature and scale of the problem that Black is talking about. And to claim that her speech was “unsisterly” and have a dig at her accent shows how some people struggle to take sexism seriously. It all shows exactly why Black’s speech is so needed. And for most people, her speech will continue to be a source of inspiration in the fight for women’s equality.