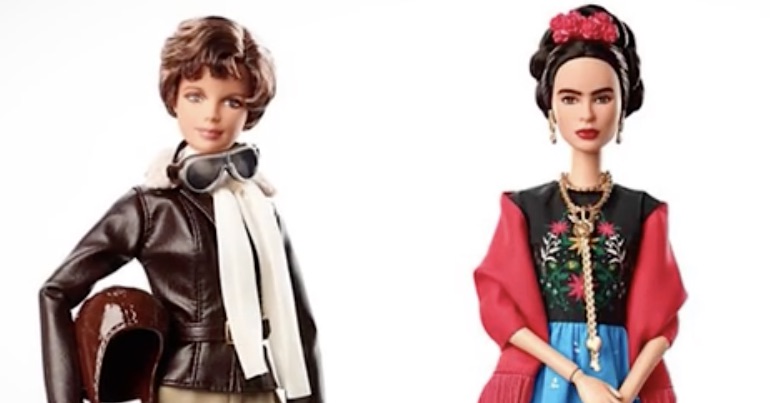 On 8 March, International Women’s Day (IWD) celebrates the achievements of women around the world. It is also a day to acknowledge that “nowhere in the world can women claim to have all the same rights and opportunities as men”, and to work towards positive change.

This year, US toy company Mattel joined the ‘celebration’ and introduced a new line of ‘role model’ Barbie dolls. But as many people have pointed out on social media, they’ve got this badly wrong. These dolls actually epitomise capitalism and negative gender stereotypes.

According to Mattel, the dolls are “empowering female role models”:

With 86% of US moms worried about the type of role models their daughters are exposed to, we are committed to shining a light on empowering female role models in an effort to inspire more girls.

On one hand, the women chosen for the dolls are genuinely inspiring role models. Mattel included the communist and revolutionary artist Frida Kahlo, Polish journalist and explorer Martyna Wojciechowska, and Katherine Johnson, one of the first Black women to work for NASA.

But there’s a big problem. For a start, the dolls seem to be standard looking Barbie dolls wearing new costumes. And, as many have pointed out, the problems don’t end there.

In 2017, Mattel (the world’s largest toy manufacturer) reported a 15% loss in profits. These ‘role model’ dolls cost nearly $30 in the US. And many have seen this as the company cashing in on IWD for profit:

Is this PR or will these be mass distributed? What is the pricepoint and how many will be made. We aren't helping kids if these all fall into the hands of adult collectors or only those who can afford $100 a doll.

As Trump’s presidency takes hold, a UN report has found rising levels of “inequality and extreme poverty” in the US. The report found that around 18%, or 13.3 million children, live in poverty: a “shockingly high number”.

But Mattel’s push for profits ignores these children. There’s been no indication, for example, that any profits will be used to help women and children:

But what are you doing with the funds collected from our cultural icons? How are you supporting women and girls’ rights

As one commentator observed:

They’re taking our role models, our heroes, and using their likeness to take our money and perpetuate everything we’re trying to dismantle… An incredibly expensive doll who says that -all dreams are possible- seems pretty ironic when most girls can’t even realize their dreams of owning the fucking doll in the first place.

Mattel did include UK boxing champion Nicola Adams, and fencer Ibtihaj Muhammad, among the ‘sheroes’. But as Paralympic champion Hannah Cockroft pointed out:

Nice idea @Barbie but would have loved to have seen a disabled role model included! The most under represented minority group in the world need people to look up to too! #MoreRoleModels #Whataboutme? #ShareASmileBecky #InternationalWomensDay https://t.co/Q2TKTdIBEo

And others were quick to point out problems with the Kahlo doll:

Mattel has a new line of Barbies, called Role Models. One of them is supposed to be Frida Kahlo, no wheelchair, no accident, operation or polio scars, and no unibrow.#MoreRoleModels @Mattel #DisTheOscars #RepresentationNotErasure

Kahlo was famous for celebrating the female form. In self-portraits, she exaggerated her unibrow and refused to conform to idealised standards of beauty:

It’s great that a Frida Kahlo Barbie exists, but it would’ve been greater had the physical feature that subverted (and still subverts) gendered western beauty standards not been minimized: https://t.co/aqzMlsoLHq

In fact, if Kahlo were still alive, there’s a chance she’d prefer this look:

Hey, you should do another design 😉 pic.twitter.com/DVE06i20FD

It’s perhaps more likely, though, that she’d not want to be turned into a Barbie at all:

This is such massive disrespect to Frida Kahlo. Disgusting. She was communist. She struggled with her self image. So you make a prettified mass produced doll out of her to sell to young girls. This is against everything she stood for.

Kahlo’s family, meanwhile, has insisted that Mattel did “not have the proper authorization” to use her image:

It gets worse. Although Mattel is claiming to ‘shine a light’ on incredible women, there’s actually nothing new about these dolls, beyond costumes. Mattel has done little to make the dolls look like the real women they represent:

How about a doll that looks like a real woman not like she's been stretched like a piece of rubber? How about that as a role model so girls don't grow up to get ribs removed to have smaller waists? So long as Barbie looks so freakishly long & thin, doesn't matter what she is.

WHY are all of these dolls created with such unrealistically thin arms, legs etc? You're portraying all of these female role models as though they all suffer from anorexia. This is an unhealthy image to be giving young girls.

In reality, these dolls seem to be little more than a cynical marketing ploy; the antithesis of the serious issues IWD seeks to address. As the campaign highlights:

The majority of the world’s 1.3 billion absolute poor are women. On average, women receive between 30 and 40 percent less pay than men earn for the same work. Women also continue to be victims of violence, with rape and domestic violence listed as significant causes of disability and death among women worldwide.

Given these facts, Mattel’s ‘role model’ Barbies are a pretty twisted interpretation of reality, and an insult to women around the world. This year, the theme of IWD is ‘Press for Progress’. But these dolls are a huge step backwards.

– Support groups that help women in the UK and around the world: Sisters Uncut, Women’s Aid, Women on Wings, The Fawcett Society, Body Gossip.

– Boycott Barbie, and buy dolls from independent UK sellers. Treehouse Dolls is donating 10% of its profits on IWD, and Lottie Dolls “look like kids”.