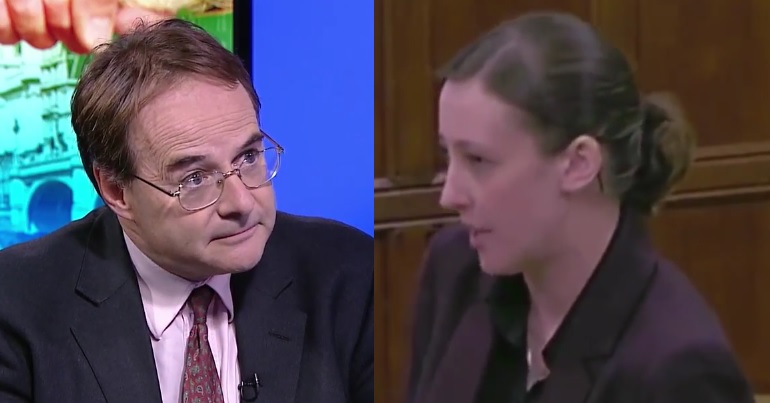 Observers have branded a Daily Mail journalist a “hoofwanking bunglecunt”, among other things, after seeing him mock Mhairi Black’s accent.

Black gave a speech in parliament on 7 March during a debate on whether misogyny should be classified as a hate crime. The Scottish National Party (SNP) MP received high praise for her contribution to the debate, where she detailed the misogynistic abuse she receives on a regular basis.

There was, however, one person who greeted Black’s honesty with less than praise: the Daily Mail‘s Quentin Letts. The tabloid’s columnist claimed he’d been present during the debate. But he said Black’s speech was difficult to understand for one particular reason:

Went to the 'ban wolf-whistling' debate just now. Few there. Mhairi Black (SNP) gave a speech full of rude words but I'm not sure anyone fully understood them. It's not an easy accent.

It was clear by the way Letts began his tweet that he wasn’t about to launch into a glowing review of Black’s contribution. He called the parliamentary session a “ban wolf-whistling” debate. But the debate was about much more than wolf-whistling, including protecting children from sexual name-calling and harassment. It appears that Letts just saw it, however, as an attempt to criminalise “the hello-darlin’ pavement ogling that can occur outside pubs on balmy evenings”.

Letts then accused Black of giving a speech “full of rude words”. But Black was only relaying foul language used about her by others. This is a fact Letts ‘forgot’ to mention. He did, though, remember to claim that Black was incomprehensible because of her ‘not easy’ accent.

This is the same journalist who studied at Trinity College, Dublin. What a puzzling time that must have been for him.

Letts’s attack on Black’s accent (going for her vagina was clearly a no-no under the circumstances) did spark a debate of its own, though. One was about his professionalism and potential motives:

Mind, would you not be better addressing the substantive of her speech, rather than dismissing her accent?

I thought the UK was slowly becoming better than judging people based on a lack of BBC accent. Her accent isn't even hard to understand, you're just being condescending for the sake of it.

Plus, it also gave people the chance to shower Letts in some profanities of their own:

He must have an A+++ in Patronising Gitness…

No condemnation of the people who used those words TO her however. But lets laugh at her accent. You really are an ass-hat.

And as SNP engagement strategist Ross Colquhoun pointed out, Letts appears to be in the minority of people who don’t understand, or appreciate, Black’s speeches:

Mhairi Black has gone viral globally. Quentin Letts, not so much. https://t.co/2tjO0raEKi

So all Letts managed to achieve with his cynical tweet was to prove Black right. “Misogyny is everywhere in our society”, as Black said, and it comes in many forms. And there’s no better time to call out such patronising and unwelcome attitudes than on International Women’s Day.