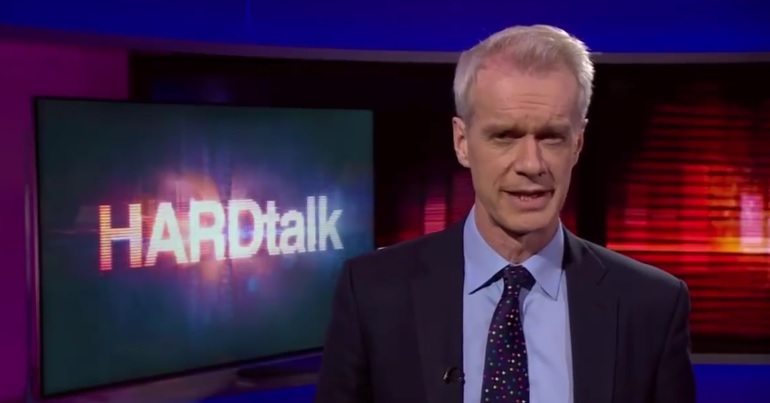 The BBC first aired an episode of its chat show HARDtalk in the wee hours of 7 March. And no wonder it chose to broadcast host Stephen Sackur’s comments while much of Britain was asleep. Because he essentially spent the show mocking the most persecuted people on Earth.

Sackur interviewed Ahmad Tibi, leader of the Arab Movement for Change (Ta’al), on HARDtalk. Ta’al is an Israeli-Arab party that has representatives in the Knesset (Israel’s parliament).

Sackur began by raising the effect Donald Trump’s election is having on the relationship between Palestinians and Israelis. Tibi said  Trump has had a “negative” impact on the situation. And he claimed that, in his speech about Jerusalem, Trump adopted the “occupation narrative”. Sackur responded:

Well, you can make your points about international law. But surely what Donald Trump has actually done is recognise reality, in perhaps a more honest way than previous US presidents.

The BBC host continued, sniggering as he did so:

Because the truth is – it’s obvious to everyone – the Israeli capital is in Jerusalem. That’s where the prime minister’s office is, it’s where the cabinet meets… and Donald Trump has said enough with this nonsense, let’s just recognise reality.

But according to the international law Sackur was quick to dismiss, Jerusalem is not the Israeli capital – because Israel has no official sovereignty over the city. That’s why Trump’s announcement in December 2017 that he would recognise Jerusalem as Israel’s capital was met with widespread criticism. As Tibi pointed out:

That’s nonsense. Because in 1967, East Jerusalem was occupied… this is the reality. And if there is a thief in the area and he stole your house, it is reality [but] you’re not supposed to accept the reality as it is.

Israel seized western Jerusalem in the 1948 Arab-Israeli war. And it then occupied East Jerusalem during the 1967 war. So, as Tibi says, Sackur is essentially arguing that because “a thief” stole this land, the “reality” now is that it belongs to the “thief”. But that argument is contrary to how the law works in most of the world.

And presumably, it wouldn’t be an argument Sackur would make if a thief stole his house.

This exchange wasn’t an anomaly in the BBC HARDtalk episode either. Because shortly afterwards, Sackur said that, in light of Trump’s approach to the conflict, Tibi should face up to another ‘reality’:

Frankly, many Palestinians would now acknowledge you’ve lost. You’ve lost in the sense that your interests are never going to be achievable.

The Palestinians have now endured a 50-year-long occupation of their country. Israel has stolen land, freedom and even their children from them. All too regularly, Israeli forces also take their lives. Yet they struggle on.

Sackur, however, essentially mocked the Palestinians’ persistence. In the face of their fortitude, he effectively said ‘give it up already’. That’s a despicable attitude to have towards one of the most persecuted peoples on Earth.

Featured image via Breaking the Silence/YouTube