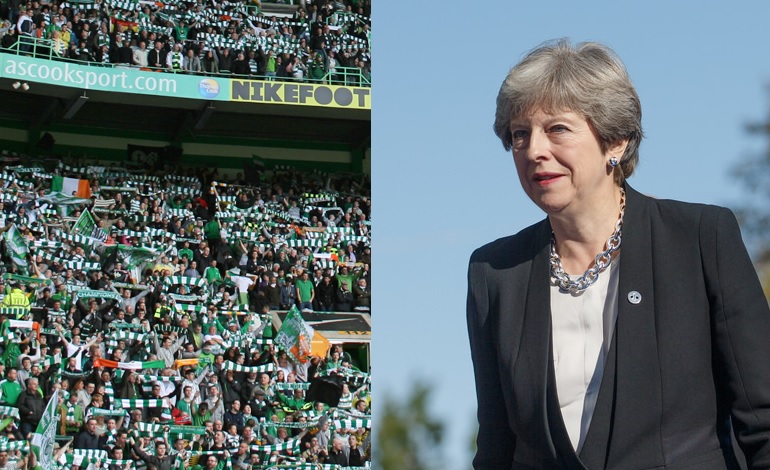 Scottish football fans sent a blunt message to Donald Trump on 10 December. Following the US President’s catastrophic decision to recognise Jerusalem as the capital of Israel, Celtic FC fans apparently unfurled banners at a match:

The message was clear. Celtic fans do not recognise Jerusalem as the capital of Israel. “Jerusalem is Palestine,” they wrote. And they don’t recognise Trump’s authority either. Or in their words, “F**k Trump”.

In short, they took a proper stand. Theresa May’s government, however, did not.

Fans of Glasgow’s Celtic FC have a history of standing up for Palestine. In 2016, European football’s governing body UEFA fined the club after fans waved Palestinian flags at a game with an Israeli team. But fans launched a GoFundMe campaign in response to the fine, which they called a “petty and politically partisan act”. The campaign reportedly raised £180,000. And they sent the proceeds to Palestinian charities.

That fine, however, obviously hasn’t deterred Celtic fans from expressing their solidarity with Palestine.

The UK government also responded to Trump’s decision. May said it was “unhelpful in terms of prospects for peace in the region”. But when faced with the opportunity to back up those words with action, the government refused.

In a debate on the issue in parliament, MPs urged the government to recognise Palestine as a state. They clearly thought the response to Trump’s ‘reckless‘ decision should be to recognise Palestine immediately. But Foreign Office Minister Alistair Burt wouldn’t commit to doing so. He also said no to ruling out a state visit from Trump.

The consequences of Trump’s actions are already becoming clear. Since protests began against the move, hundreds of Palestinians have sustained injuries from gunfire, tear gas and rubber bullets. Israel has also bombed Gaza, allegedly in response to three rockets launched from the strip. Israeli forces have reportedly killed four people so far.

As expected, Trump has caused absolute chaos in effectively handing Jerusalem to Israel. And it’s the Palestinians who are largely paying the price.

So these football fans should be applauded for their display of solidarity.

Shame on the British government for not doing the same.