Theresa May gets the chance to stand up to Trump on Jerusalem. She bottles it. - The Canary 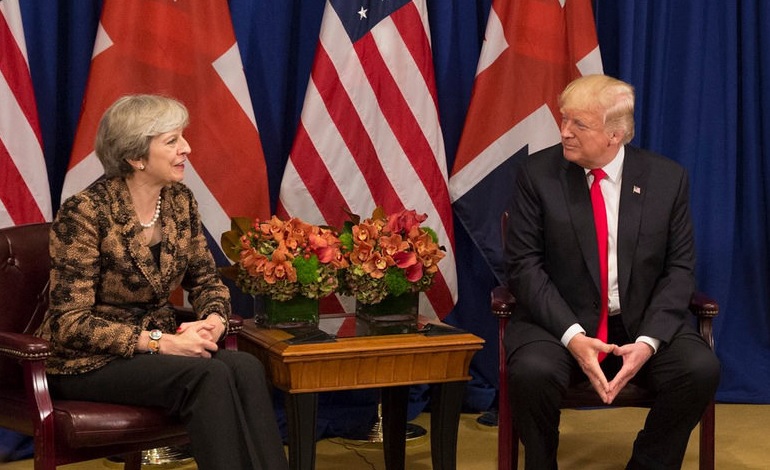 Theresa May had some harsh words for Donald Trump after he announced the US would recognise Jerusalem as Israel’s capital. MPs then gave the government an opportunity to act on those words during a debate on the decision in parliament.

But the government bottled it, proving it’s as flaccid as ever despite its tough rhetoric.

The US President confirmed on 6 December that the US would recognise Jerusalem as Israel’s capital. He also announced that his country would relocate its embassy to the city. The decision received widespread criticism.

May said Trump’s choice was “unhelpful in terms of prospects for peace in the region”.

Israel presently has no officially recognised sovereignty over Jerusalem. But it seized western Jerusalem in the 1948 Arab-Israeli war. And it then occupied East Jerusalem during the 1967 war. Around 423,000 Palestinians live in Jerusalem. Nearly two thirds of them live in the areas seized by Israel in 1967.

Shadow Foreign Secretary Emily Thornberry raised an urgent question in parliament on the issue. She accused Trump of taking an “absolute hammer blow” to the peace process in making the decision. And she asked Foreign Office Minister Alistair Burt what the government is “going to do about this mess”.

Numerous MPs, however, posed a different question. They asked Burt when the government would recognise Palestine as a state. They clearly thought the response to Trump’s ‘reckless‘ decision should be to recognise Palestine immediately. But Burt didn’t agree. Parliamentary record Hansard recorded him as saying:

Our view has been that recognition of Palestine should come at the time when that is in the best interests of prospects for peace and the peace process. That remains our position for now.

It is clear that many view Trump’s decision as a threat in itself to the peace process. Thornberry noted that, as did many MPs. Protests and unrest in Palestine and beyond are already happening because of it. So if the government is waiting until it is “in the best interests of prospects for peace and the peace process” to recognise Palestine, now is the time. But it said no.

Burt also said no to ruling out a state visit from Trump.

Essentially, the government is taking a ‘keep calm and carry on’ attitude to Trump’s catastrophic decision. It’s not willing to take any action that will make an actual difference. So its tough talk should be taken with a pinch of salt.

– Join the protest against Trump’s decision in London on 8 December.

Featured image via The White House/Flickr