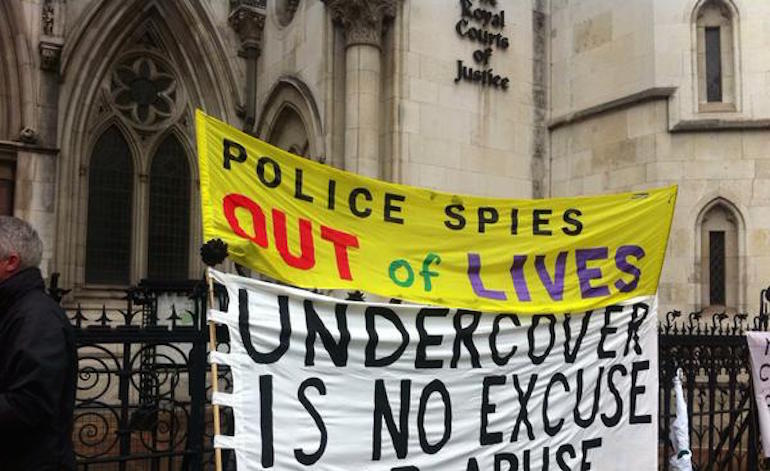 New revelations have increased the pressure on an inquiry into undercover policing to publish the names, both cover and real, of all undercover officers operating over a 60-year period.

Former undercover police officer Bob Lambert began infiltrating environmental and animal rights groups in 1984 and adopted the name ‘Bob Robinson’. He began a relationship with ‘Jacqui‘, an animal rights activist, and they continued to live together for the two years following the birth of their son. In 1988, Lambert made up a story that he was wanted by police and had to flee to Spain. But he simply resumed his Special Branch duties and went on to head the Special Demonstration Squad. It’s believed Lambert had at least four intimate relationships while undercover.

Lambert, who co-wrote the leaflet that led to the McLibel trial, was outed when challenged by five members of London Greenpeace after he’d spoken at an anti-racist conference.

‘Jacqui’ was subsequently awarded £425,000 in damages for the abuse suffered.

Her child, referred to as ‘TBS’, is now an adult and is suing the Metropolitan Police Service for “psychiatric injury”. This increases pressure on the inquiry to be more transparent.

But ‘Jacqui’ was not alone. In 2011, eight women lodged claims, and in November 2015 the Met issued an apology to seven of them. Two months later, compensation was awarded in an out-of-court settlement.

Meanwhile, inquiry chair Sir John Mitting said [pdf, p36 (143)] he saw no relevancy in examining the early years of Special Demonstration Squad cases. But he was then shown [pdf, p36 (144)] that undercover police officer N297 [pdf], ‘Rick Gibson’, had relationships with at least two women as part of his cover during the 1970s.

Operation Herne reported that more than 460 activist groups were spied upon, though that number is far higher if including other undercover groups operating over decades.

those targeted need to know both the cover names used by the undercover officers and their real names.

Now, the Met admits that relationship abuse by undercover officers equates to torture. That – along with the TBS litigation, the ‘Gibson’ revelations, and now an appeal to the United Nations – increases pressure on the inquiry to publish all cover and real names of undercover officers.

– Check out the Undercover Research Group and the Campaign Opposing Police Surveillance.