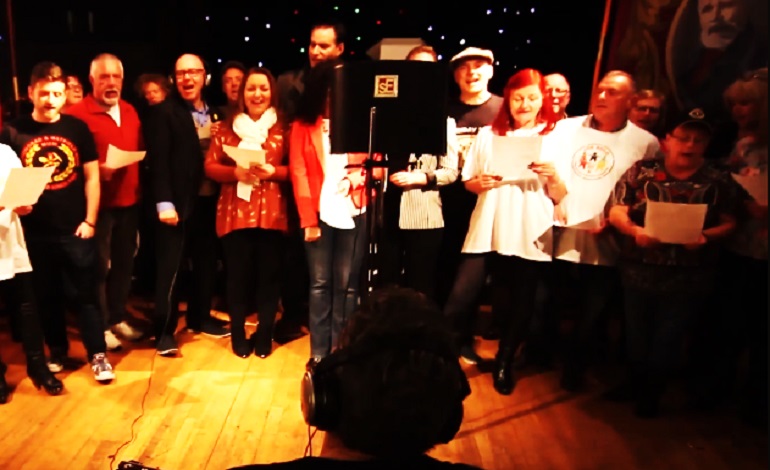 A group of former miners is delivering an anti-austerity message this Christmas, aimed directly at the Tories. But far from being a ‘one hit wonder’, this is the second Christmas song the group has released.

They Could Not Break This Town is by Joe Solo and the Hatfield Brigade. A stirring folk-inspired ballad about how the miners fought Margaret Thatcher’s government during the 1984-85 miners’ strike, it aims to highlight how a community came together against the odds. And it also has a message [0:49] for everyone currently fighting the Tories:

They say our spirit’s broken now;

They say our spirit’s broken now;

The Hatfield Colliery was at the centre of the 1984-85 miners’ strike. As The Canary previously reported, former miners and their families released Merry Christmas from Hatfield Main with Solo last Christmas. It recounted how people came together to give the miners, by that time destitute and without food, a Christmas to remember. And the miners’ memories of that awful time inspired them to help food banks last year.

The Canary spoke to former miner Leslie Moore. And he said this year’s song is slightly different, with an anti-austerity message. You can read his full interview here, but he noted:

When we decided to record this song… we were mindful of the punitive measures continuing in many mining communities. We decided to sing about the fact that for all the deprivation, the poverty & punishment meted out across the coalfields… we are still here.

It’s a gesture to show our children and grandchildren they must never give up just like mine & your grandparents fought on… Make this song your own; this is your village, your town, your community. And wherever working people defend their rights you will find the miners at your side.

Lawyer and campaigner Peter Stefanovic is once again supporting Solo and the Hatfield Brigade. He told The Canary:

Despite what mainstream media and the Tories would have you believe, the majority of people supported the miners and their families throughout their epic struggle of 1984-85. In many ways these singles are their way of repaying some of that kindness… It was a huge honour for me to be invited back again this year to sing with our heroic former Miners and their families in the Hatfield Brigade. The money raised by the single will really change lives this Christmas so please download and support it.

And Solo told The Canary:

People talk about community as an abstract concept, a political buzzword, a theory. The Hatfield Brigade are community. In 1984-85 they went through something together that bonded them for life. Them lads and lasses are an absolute joy to be around and to feel a part of. Wouldn’t have missed it for the world.

Sales from the single will be going to the DN7 Hardship Fund, which supports people struggling to make ends meet in the former pit villages of South Yorkshire. So what better way to not only support a worthwhile cause, but to stick it to the Tories at the same time, than buying They Could Not Break This Town.

– Buy They Could Not Break This Town.

– Join The Canary, so we can keep supporting those holding the government to account.