The right-wing press has launched a front-page war against social media. It’s obvious why. [IMAGES] - The Canary 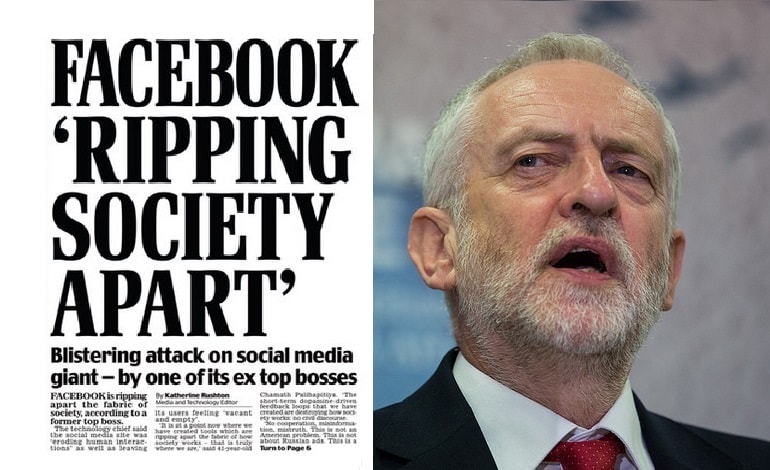 The right-wing press appears to have launched a war against social media. On 12 December, the front pages of The Daily Mail, The Sun and The Times all attacked social media from different angles:

But it’s obvious why the traditional right-wing media is bombarding social media. The rise of open discussion on the internet has dramatically decreased the influence of these organisations. Shares in The Daily Mail‘s parent company, for example, recently dropped by nearly 25% after it published a pre-tax loss of £112m for the year to September. Overall, newspapers are in rapid decline. Between 2011 and 2019, traditional advertising revenue is forecast to drop by two thirds – from £1.51bn to £533m.

That’s largely because people are increasingly getting their news online. Research from Oxford University concludes:

Recent years have seen the gradual erosion of television as the single most widely used source of news, to the point that by 2016 it has been overtaken by online sources in terms of reach — at least amongst the 92% of the UK population [with] access to the internet. The reach of printed newspapers has declined rapidly in the same period, and social media has become much more important.

Now that people can connect with each other on social media, the traditional press is no longer the gatekeeper of information. This loss of power perhaps became most obvious with the rise of Jeremy Corbyn. Under Corbyn, Labour increased its vote share by more than at any point since WWII in spite of a press very hostile to his message.

The Sun‘s front page reports on paedophiles speaking openly about their desires on Twitter. Meanwhile, the front page of The Daily Mail reports on former Facebook executive Chamath Palihapitiya. The venture capitalist said:

“Recast the companies as publishers”

The Times then offers what could be a solution to some of these problems. Its front page story is about [paywall] a report from the Committee on Standards in Public Life:

Theresa May’s independent ethics watchdog will recommend laws to shift the liability for illegal content on to social media firms, The Times has learnt. This would recast the companies as publishers and stop them describing themselves as platforms with no control over the millions of messages and videos that they host.

That means social media companies would be legally responsible [paywall] for all content people post on their sites, facing fines if it is not removed. Jim Killock, Executive Director of the Open Rights Group, told The Canary:

This is an attempt to make Mark Zuckerberg the national censor. Companies will censor legal material just to keep the risk of fines away.

Requiring social media organisations to police users could also stifle debate forums on the internet. The cost of an organisation regulating every post may price out smaller businesses from providing space for open discussion.

The newspapers surely have a point about some aspects of social media. But The Times, The Sun and The Daily Mail all plastered attacks on social media on their front pages. They are clearly lashing out over their increasing loss of influence.