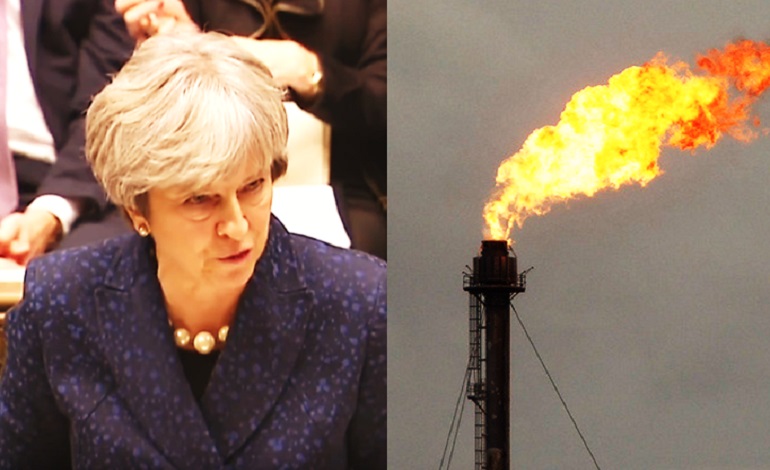 Just as Theresa May stood on a global platform vowing to take steps to “tackle” climate change, her government signed off on what some are calling the ‘intensification’ of one of the most controversial forms of fossil fuel production. And it shows the lack of teeth one government agency has against corporate polluters.

At the One Planet summit in Paris on Tuesday 12 December, May announced “new measures to tackle effects and causes of climate change”, including:

But at the same time, the government’s Environment Agency controversially agreed to alter the terms of oil and gas exploration company Cuadrilla’s licence to drill at a site in Lancashire.

Preston New Road, near the village of Little Plumpton, is at the centre of a row over fracking. Cuadrilla has permission to frack the site. But local people are against the company’s plans. And they have stepped up their protests since January.

The government gave the go-ahead for Cuadrilla to frack there – the first site of its kind in the UK – last year. The company officially began work on 5 January. And ever since, protesters have been at the site.

A fracking affront to democracy?

The government’s decision to let Cuadrilla frack has been controversial. Lancashire County Council originally refused the company’s application to frack the site. But Communities Secretary Sajid Javid stepped in last October and gave the company permission. And now, the Environment Agency has broadened the terms of its licence.

The Blackpool Gazette reported Friends of the Earth’s concerns:

[Friends of the Earth] said Cuadrilla was seeking to intensify hydraulic fracturing at the site with potentially multiple fracking stages per day, compared to one under the current permit.

It said it had concerns about the real amount of fluid that returns to the surface after high volume hydraulic fracturing.

It said Cuadrilla’s own figures suggest that 1,200 tanker movements will be needed to take away waste fluid for treatment, but if Cuadrilla was unable to reuse the flowback fluid, as a recent Cuadrilla spokesman has suggested, the figure could double.

Helen Rimmer from the group said:

This could lead to more fracking, and more lorry loads of potentially radioactive waste on Lancashire’s roads.

But Cuadrilla hit back at Friends of the Earth’s claims. It told The Blackpool Gazette:

Over the years we’ve heard just about every permutation of scare story from Friends of the Earth, and this is unfortunately from the same playbook.

The facts are that the quantity of flowback fluid that can be stored and managed on site safely and responsibly has not changed. In addition, the associated management practices controlling flowback fluid remain consistent with what was originally proposed.

Campaigners’ concerns about fracking are over-arching. They range from polluted drinking water and earthquakes, to its contribution to greenhouse gases. What makes it such a hot topic, though, is the public anger it provokes, witnessed at sites such as Preston New Road. So for May to stand on a global stage claiming to care about climate change, while her government allows the intensification of fracking in Lancashire, shows her words are ultimately hollow.

UPDATE: This article was amended at 1:15pm on 16 December to remove the suggestion that the Environment Agency was ‘caving in’ to pressure from Cuadrilla.