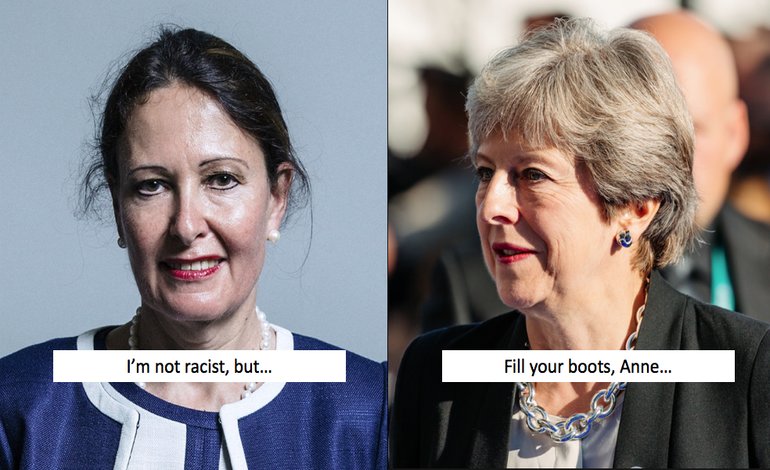 Conservative MP and party whip Anne Marie Morris used the racist slur ‘n*gger’ in a public meeting earlier this year. Rather than sacking her, the party has restored the whip to Morris. Whatever the Conservatives say about their commitment to fighting racism, this action speaks louder than words. The Tory party doesn’t give two sh*ts about racism.

“N*gger in the woodpile”

The Newton Abbot MP was speaking at a public event in July, and used a racist slur to describe a ‘no deal’ Brexit scenario. She said:

Now we get to the real n*gger in the woodpile, which is in two years what happens if there is no deal?

The phrase derives from the Deep South of the United States. It refers to slaveowners capturing slaves attempting to flee their persecution. This deeply racist term is not the sort of thing that slips off a person’s tongue unless it already had a home there. And in the moment, Theresa May claimed to agree, saying in a statement:

I immediately asked the Chief Whip to suspend the party whip…

Language like this has absolutely no place in politics or in today’s society.

But a few months later, as the country winds down for Christmas, the party has reinstated Morris’s whip:

NEW: Newton Abbot MP Anne Marie Morris who used the 'N word' at a public meeting has had the Conservative whip restored. Says: “I would like to take this opportunity to apologise again for using such inappropriate and offensive language."

By contrast, Labour MP Jared O’Mara was recently suspended from the party, sacked from the shadow front bench and forced to resign from his select committee position over homophobic comments he made online 15 years prior to becoming the MP for Sheffield Hallam.

The timing of this move is also troublesome.

In October of this year, we got the results of May’s study on ethnic prejudice in the UK. And the findings were horrific. Responding to the report, May said:

People who have lived with discrimination don’t need a government audit to make them aware of the scale of the challenge.

But this audit means that for society as a whole – for government, for our public services – there is nowhere to hide.

Just weeks later, we know exactly where those with racist views can take refuge: the Conservative Party. Because this issue does not begin and end with Morris. As a former aide to Margaret Thatcher and John Major put it in 2015, the party is “essentially racist”.

The Conservative Party is a place where men like Boris Johnson refer to black people as “piccaninnies” with “watermelon smiles”; and state that former US President Barack Obama was “part-Kenyan” with an “ancestral dislike” for Britain. Then, rather than facing political oblivion, he becomes Mayor of London and Foreign Secretary.

The Conservative Party is the place where a Muslim baroness speaks out about Islamophobia, and party bigwigs tell her to shut up. This literally happened in 2011.

And let’s not forget that, while the international community placed sanctions on apartheid South Africa, David Cameron was defying them. He travelled to the racist regime in a sanctions-busting show of solidarity in 1989, while Nelson Mandela was still imprisoned. This did not prevent Cameron leading the party as a ‘moderniser’.

This is before we even touch on the litany of other examples of this racism pervading the party:

If you ever doubted that the Tories were a racist organisation, the restoration of the party whip to the racist @AnneMarieMorris should put that doubt to bed. They're disgusting.

So Anne Marie Morris who used a racist N word has had her whip restored. If she was in a non government position she would have been sacked & never allowed to come back .

What kind of a party is @theresa_may running?

The message is clear: the Conservative Party doesn’t give two sh*ts about racism. Virtually any and every example of racist behaviour is dismissed as a brain fart. ‘Oops, I belched out some racism. Sorry. Now can we all move on?’

Newsflash: this isn’t how racism works. You don’t accidentally call someone a n*gger. Not unless you think of them as one. And despite this being blatantly obvious, the press often colludes with this false narrative, in a way that it does not if the offender is from another party.

We should not simply shrug our shoulders and accept that the Conservative Party is racist, like it doesn’t matter. A party full of racists should not be leading the country. And we should demand better. Because if we don’t, we have surrendered to bigotry.

If we persistently reward p*ss-poor behaviour with our votes, we will be paid back in contempt. This is the good news. Where May and her party’s disciplinary procedures fail, voters can win. Because ultimately, they have the say in who occupies each seat of parliament. And it’s time for some of those seats to be filled with better candidates.

– Support the work of anti-racism campaigners Hope Not Hate.