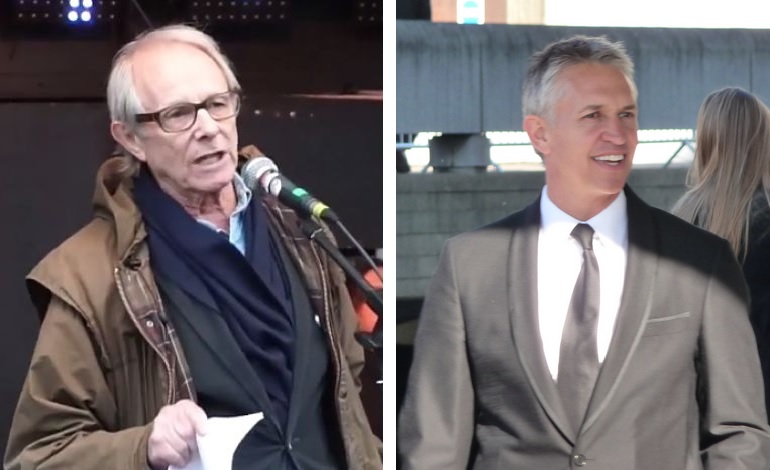 Ken Loach has waded into a row between Gary Lineker and an Israeli war crimes apologist. And the filmmaker isn’t the only well-known personality to do so.

Footballer-turned-TV-presenter Lineker retweeted a video on 11 December, labelling it “sickening”. The video showed the Israel Defense Forces (IDF) rounding up Palestinian children and caging them in a checkpoint. As The Electronic Intifada pointed out, Lineker’s retweet helped to push views of the video up to almost one million.

But a Twitter row quickly broke out between the presenter and an ex-IDF spokesperson. Peter Lerner argued that Lineker’s tweet lacked “context”. He claimed Palestinian kids were on a “wild rampage”, and that those who throw stones “need to be stopped“. They are a “public menace”, Lerner said.

But unlike Lerner, Loach agreed with Lineker’s response. Because he said it’s the only “responsible” one to have to such footage:

All respect to you mate. Freedom, justice, equality, peace. Kids in cages is always wrong, period. These kids are resisting tyranny!

More of the same

Israeli human rights group B’Tselem orginally published the footage on 15 November and stated that the events took place on 13 October. So although people have largely watched the video of the incident following Donald Trump’s decision to recognise Jerusalem as the capital of Israel, it happened before that.

Therefore, this isn’t an unusual scene that happened in the fallout from that terrible decision. It’s just a ‘normal’ day for Palestinians. This is what occupation looks like.

Trump’s actions, however, have had some dire consequences for minors in the country. As this image of one blindfolded, handcuffed and seemingly beaten Palestinian boy shows:

"Fawzi said he was beaten with a rifle and he showed up with bruises all over his neck, chest and back." https://t.co/iJTYmHJUPA

According to Al Jazeera, in the days since Trump’s announcement more than 700 Palestinians have sustained injuries and “at least four have been killed”. Israel has also bombed Gaza, allegedly in response to three rockets launched from the strip.

It’s not surprising that the person Israel paid to justify its crimes would protest Lineker’s tweet. With nearly seven million followers, Lineker’s tweets reach a lot of people. But Lerner’s complaint fell on deaf ears. Because the evidence speaks for itself. And increasingly, high-profile figures are making sure they do their part to make sure the public see that evidence.

For example, numerous figures including Loach, journalist and filmmaker John Pilger, and writer Noam Chomsky have supported a short film called Today They Took My Son. It’s the story of a Palestinian mother coping with her son being taken away by Israel’s military system.

This is a brilliant film and demands to be seen. The story it tells is irrefutable, entirely justified. You don't know what's going on? Then watch this film and I dare you to turn your back #Palestinian https://t.co/q4fa1j0PDX https://t.co/zWZtWkfKqV

The situation depicted in the film is not unusual. Accountability programme director at Defence for Children International – Palestine (DCIP), Ayed Abu Qtaish, says there are around 320 Palestinian children in Israeli prisons and detention centres.

They need someone to speak up for them and share their experiences. Because, as Loach suggests, once people know what they’re going through, it’s very hard to “turn your back”.

That’s why apologists like Lerner get up in arms when Lineker and others tell you their stories.