In just over a minute, an MEP perfectly sums up May's contempt for the British people [VIDEO] - Canary 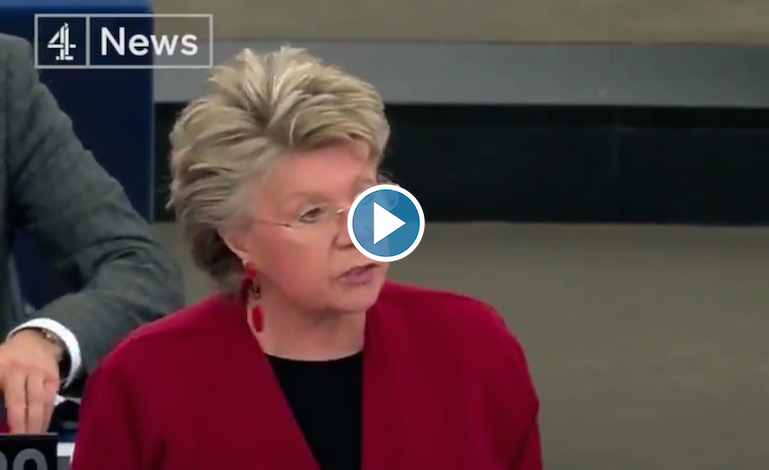 After her Brexit defeat in the Commons, Theresa May is heading to Brussels. She faces an uncertain welcome from politicians who have been calling out her Brexit strategy throughout the negotiations. And one MEP, former European Commissioner Viviane Reding, has given a particularly scathing criticism of the British government – in particular, its contempt for the British people in the way it has conducted the negotiations so far.

Then she sticks the knife in:

I am saddened that British people have fallen victim to political crooks, and that the result is a divided and weakened UK.

Here is a video of Reding’s entire speech:

"Brexiters promised £350 million a week to their citizens, instead they have to pay billions of euros. They promised a global Britain, instead they got a lonely Britain."

EU politicians have been calling out May’s government throughout the negotiations.

Indeed, not long after the Brexit phase one agreement was outlined by May in Brussels, Environment Secretary Michael Gove commented that “nothing is agreed until everything is agreed”. David Davis soon followed, saying that the agreement was only a “statement of intent”, and not “legally enforceable”.

So perhaps it was no surprise that, in response, former Belgian prime minister and European Parliament chief Brexit negotiator Guy Verhofstadt tweeted:

Meanwhile, the Rand Corporation (a US thinktank) has let rip, arguing that every Brexit option will prove less favourable to Britain than staying within the EU.

So now, we’re no longer talking about Brexit or no Brexit, but about the economic impact of Brexit on the lives of millions of Britons for possibly generations to come. This is why May needs to stop treating the British public with such contempt.