The British Journalism Awards have selected 2017's 'best' journalism, and it's no surprise what they went for [OPINION] - Canary Workers’ Co-op 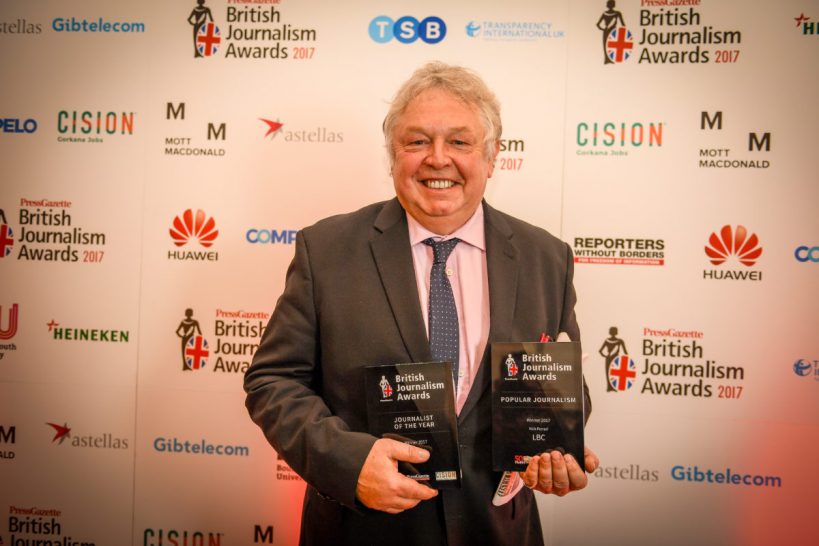 The British Journalism Awards 2017 were announced on 11 December. The coveted ‘Journalist of the Year’ award was presented to LBC radio’s Nick Ferrari. And judges were reportedly “impressed” by his infamous pre-election interview with Shadow Home Secretary Diane Abbott.

Ferrari presents the breakfast show on LBC every morning between 7am and 10am. And his show attracts an audience of around 1.1 million listeners a week. Press Gazette, which organises the awards, reports that:

The judges were impressed with the calm and methodical way he interviews politicians, most notably shadow home secretary Diane Abbott ahead of this year’s general election.

During the interview broadcast on 2 May, Ferrari asked Abbott about police numbers. The Shadow Home Secretary bungled her response and confused her figures. Her poor performance was seized upon by the newspapers and reported widely the following week. But similar pre-election gaffes from Conservatives like Philip Hammond were largely ignored.

Like the 2016 winner, Laura Kuenssberg of the BBC, or 2015’s Jonathan Calvert (The Sunday Times), questions are raised about Ferrari’s political leanings. During his career he has previously worked for The Sun, Sky News and Fox in the US. He is presently a columnist in The Express. While on air, his reputation for tough interviewing seems selective.

When Conservative Environment Secretary Michael Gove stumbled over his answers, Ferrari defended him. When Theresa May guested on his show, he gave her an easy ride. Afterwards, he described the PM as “charming”, “determined” and “focused”. This was as she fought an election campaign derided from all sides as inept and incompetent. May even earned the nickname ‘Maybot‘, as commentators found her so repetitive and robotic.

The judges also awarded ‘Documentary of the Year’ to Channel 4‘s Dispatches. Their programme, ‘The Battle for the Labour Party’, presented Jeremy Corbyn’s party as being hijacked by the so-called ‘hard left’. Meanwhile, in the last five years, no journalist from a left-wing outlet has won the ‘Journalist of the Year’ award.

If such baubles are only presented to those who push the establishment line, like Kuenssberg, or show open right-wing bias, like Ferrari, the condition of British journalism must be pondered.

Featured image via The Press Gazette