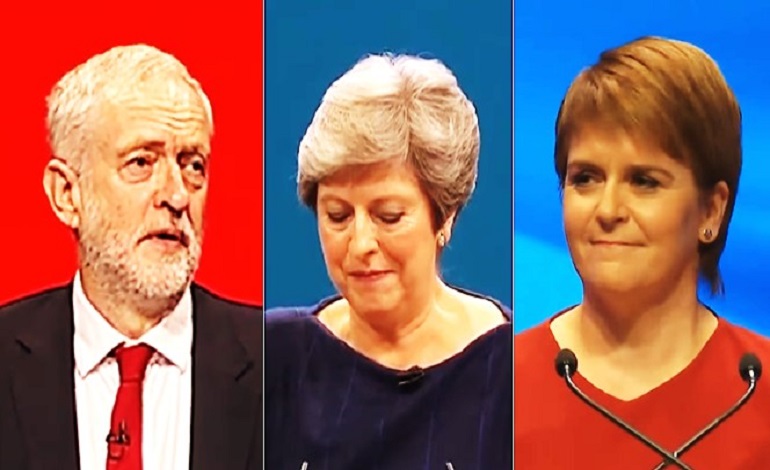 The Labour Party and the SNP have joined forces to deliver an early Christmas ‘present’ to Theresa May. And two of her own MPs have also contributed to May’s ‘gift’, in a move against what Jeremy Corbyn calls [paywall] an “existential threat”.

The Divest Parliament campaign was first launched in December 2016. It aims to apply pressure to the Parliamentary Contributory Pension Fund to stop investing in fossil fuel companies. So far, around 100 MPs have signed up to the campaign, including Conservatives Zac Goldsmith and David Warburton, Green Party co-leader Caroline Lucas, and members of Plaid Cymru, the Lib Dems, Labour and the SNP.

But on Monday 11 December, Corbyn and SNP Westminster leader Ian Blackford both signed up to the Divest Parliament campaign. As The National reported, Blackford said:

I want Scotland to continue to build a prosperous, low-carbon economy. We have already exceeded our world-leading climate change goals and our renewable energy targets too, but we must remain ambitious for the future and can always go further. It is important that our investment decisions support this ambition.

Currently, the MPs’ pension fund has investments in fossil fuel giants BP and Shell of £5.6m and £4.9m respectively.

But the trustees of the £612m fund have refused to budge, saying that they cannot force the investment companies which manage the fund to change their stance “on ethical grounds”. Although Corbyn seems undeterred. He said [paywall] of the campaign:

Our country must show leadership in confronting the existential threat posed by climate change… One contribution we can make as MPs is to end the investment from our pension fund in fossil fuel industries… To help protect our planet, we must wean our economy off its fossil fuel dependence and do more to move towards clean and renewable energy.

Will the government act?

Blackford and Corbyn’s support comes as May attends the “One Planet” summit. It is a meeting of 50 world leaders to discuss tackling climate change. And with her government repeatedly being criticised for not doing enough to deal with the issue, it is unlikely she will lend her support to Divest Parliament. But Patrick Killoran from the Divest Parliament campaign is hopeful:

Investing in companies such as BP and Shell, who… lobby against climate policy to line executives’ pockets, is dangerous and wrong. I hope more MPs will join those committing to Divest Parliament…

As a government report in June said, UK progress on tackling climate change is “stalling”. If the climate threat is to be taken seriously, change has to come from the top. And putting an end to MPs indirectly supporting some of the worst climate offenders on the planet via their pensions would be a step in the right direction.

– Contact your MP to urge them to support Divest Parliament.

– Read more from The Canary on climate change.