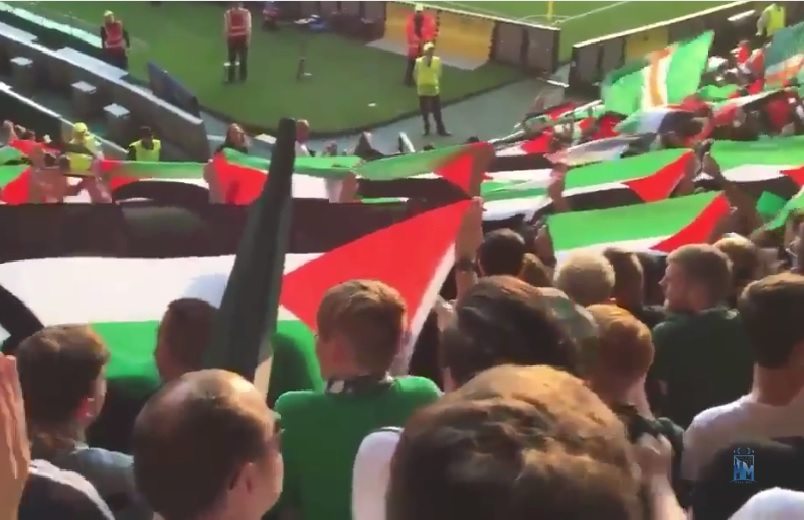 Fans of Glasgow’s Celtic Football Club have raised over £100,000 for Palestinian charities through a GoFundMe campaign. The fund was launched after European football’s governing body UEFA fined the club for fans waving Palestinian flags at a recent game with an Israeli team.

The #matchthefineforpalestine campaign has well and truly stuck it to the UEFA bosses.

A strong message for UEFA

The appeal was set up by the Green Brigade supporters on 21 August. It reads:

At the Champions League match with Hapoel Beer Sheva on 17 August 2016, the Green Brigade and fans throughout Celtic Park flew the flag for Palestine. This act of solidarity has earned our club respect and acclaim throughout the world. It has also attracted a disciplinary charge from UEFA, which deems the Palestinian flag to be an ‘illicit banner’

In response to this petty and politically partisan act by European football’s governing body, we are determined to make a positive contribution to the game and today launch a campaign to #matchthefineforpalestine.

The initial target for the fund was £15,000 but it now stands at over £100,000. The raised funds will be split between Medical Aid Palestine (MAP) and the Lajee Centre, a Palestinian cultural centre in Aida refugee camp on the outskirts of Bethlehem.

The campaign page explains that MAP is a UK-based charity “which delivers health and medical care to Palestinians worst affected by conflict, occupation and displacement”. Its remit includes “training and funding a team of Palestinian surgeons and medics to treat and operate on those affected by the recent conflict in the Gaza Strip”.

A gesture of solidarity with Palestinians

Gaza is still struggling to recover from the 2014 Israeli assault, called ‘Operation Protective Edge’, which left over 2,000 Palestinians dead, 475,000 displaced, and massive destruction of its infrastructure. More recently, Israel launched up to 50 strikes in the area, following a single rocket being fired from Gaza. The rocket reportedly landed between two houses.

The Lajee Centre will be able to extend its cultural programme due to the funds it receives from the Green Brigade campaign. According to the #matchthefineforpalestine creators, the centre has pledged to set up the centre’s first football club. It will be named Aida Celtic. Salah Ajarma, the Lajee Centre’s Coordinator commented:

it will mean so much to our young people to be part of an official team, to have boots and strips and to represent the camp wearing the colours of our friends. Aida Celtic will be a source of pride for all in Aida

As the campaign notes, the Lajee Centre provides vital respite for the residents of the Aida refugee camp:

For the young people of Aida, the Lajee Centre in the heart of the camp offers hope and an escape from the realities of life under Israeli occupation. Its programme of arts, culture and sporting activities are a lifeline for its impoverished and oppressed people.

Its occupants have sent a video message of appreciation to the campaign.

A powerful act of popular defiance

Though UEFA deems the Palestinian flag to be an ‘illicit banner’, it is clear that many Celtic fans, and the thousands who have donated to the campaign, do not. Like Google, which recently wiped Palestine from its maps, UEFA has attempted to delegitimise the country, and therefore its people’s struggle.

But it has actually achieved quite the opposite. It has given people the opportunity to highlight the plight of Palestinians, and raise money to support them.

In defying the biased elites of the football world, these fans have proved themselves true champions. That’s the sort of team spirit that should make us all proud.

– Find out more about the work MAP do.

– If you want to show solidarity for this campaign, you can do so here.