Oxfam slams the UK government's involvement in the Yemen war, but is complicit itself - Canary 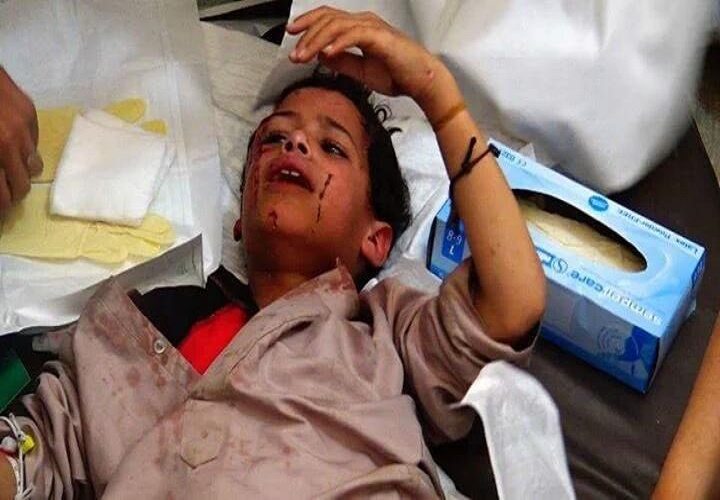 The charity Oxfam slammed the UK government on 23 August for its involvement in the conflict in Yemen. It was highly critical of the Conservative government’s position on arms sales to Saudi Arabia. But the charity itself may wish to look closer to home, as it accepts donations from companies that directly profit from the arms industry. And the war in Yemen.

Oxfam spoke at the second meeting of countries that have signed up to the Arms Trade Treaty. The treaty sets global standards for the trade in weapons and seeks to prevent illegal arms trading. But Oxfam has accused the UK government of not meeting its obligations under the treaty. Specifically in reference to its arms sales to Saudi Arabia, the main protagonist in the Yemeni conflict.

fuelling a brutal war in Yemen, harming the very people the Arms Trade Treaty is designed to protect. Schools, hospitals and homes have been bombed in contravention of the rules of war. The UK government is in denial and disarray over its arms sales to the Saudi-led coalition bombing campaign in Yemen. It has misled its own parliament about its oversight of arms sales and its international credibility is in jeopardy as it commits to action on paper but does the opposite in reality.

Since the conflict in Yemen began in March 2015, the UK has sold over £3bn of weapons to Saudi Arabia. As The Canary has previously reported, the UK has numerous reasons to support Saudi Arabia in this conflict. We export £7bn in goods to the Wahhabi kingdom every year. Around 6,000 UK businesses rely on our trading relationship with them. The UK government has £11bn worth of investments in Saudi Arabia. And King Salman has a £26m London property portfolio.

Arms companies like Lockheed Martin, Raytheon and BAE Systems all sponsor the Royal United Services Institute (RUSI), a thinktank which gives military and strategic advice to the UK government. Members of the House of Lords also benefit from the UK’s involvement in Yemen. Viscount Eccles, Lord Glendonbrook, Lord Lupton and Lord Sassoon are all shareholders in BAE Systems.

Profiteers on the make

Lord Powell of Bayswater sits on the government’s Joint Committee for National Security Strategy. He also works for BAE Systems and advises the government on defence spending. BAE Systems saw a 25% increase in profits last year. Its value is $22.4bn. And BAE is the company which manufactures the fighter jets used by Saudi Arabia to bomb Yemen. Jets which bombed 49 schools and hospitals in Yemen last year, killing 510 children.

Since March 2015, 320,000 children have become severely malnourished, 10.2 million are without safe drinking water, 2.2 million are in need of urgent aid, and 10,000 have died because of the destruction of health infrastructure. In more than 515 days of conflict, nearly 4,000 civilians have been killed.

Oxfam quite rightly calls out the UK government for its involvement in the conflict. The charity says it has:

received a legal opinion that UK arms transfers to Saudi Arabia constitute a clear violation of its national, regional and international arms transfer obligations under the Consolidated EU and National Arms Export Licensing Criteria, the EU Common Position on Arms Exports, and the Arms Trade Treaty.

But sadly, it appears to be complicit itself, as it is funded by numerous companies which profit from the arms industry.

The charity’s 2015/16 accounts list its supporters and donors. Among them are McKinsey & Company, a management consultancy firm which works with the defence industry to identify areas of ‘growth’. McKinsey’s Defense outlook 2017: A global survey of defense-industry executives report highlighted the Middle East as having a “positive” outlook for weapons sales. They cited that the industry would “continue to grow by 6-10% in the next three years”, and that the Middle East was one of the most “attractive” regions for weapons manufacturers.

Oxfam also accepts money from several banks, via ‘charitable foundations’. The most notable are Citigroup and JPMorgan Chase. Both these banks’ foundations are tied to their main operations. And both banks invest in arms companies. Citi has $14bn tied to the weapons industry, and JPMorgan Chase $20bn. Both have investments in BAE Systems, of $629m and $466m respectively.

The charity’s solicitors are from Freshfields Bruckhaus Deringer LLP, a law firm which also acts for BAE Systems. Banking services for the charity are provided by RBS, which has $417m invested in BAE Systems. And the auditing for Oxfam’s accounts is done by PricewaterhouseCooper (PwC), which also consults for BAE.

The Canary asked Oxfam for a statement regarding the companies mentioned in this report. A spokesperson said:

Oxfam has received donations from JPMorgan Chase and Citi Foundation; the donations have been directed to a number of  humanitarian emergencies around the world. RBS is Oxfam’s commercial banking partner and, since March 2010, RBS employees have also raised over £200,000 for various Oxfam emergency appeals as part of the RBS Group Community Investment scheme.

Taking funds from companies or using their services in no way compromises our impartiality and our ability to question their policies. We are ready to speak truth to power when the rights of the poorest and most vulnerable are at risk. For example, we accept money from the UK Government, yet today we are calling them out on their supply of arms to Saudi Arabia-led coalition for use in the war in Yemen.

Oxfam is one of the world’s most recognisable charities. And its staff undoubtedly do excellent work in helping to alleviate poverty and suffering. But its connections to companies profiting from war highlight the shambolic mess of the global financial system, and geopolitics more broadly. When you have a charity tasked with resolving humanitarian catastrophes while being funded by companies that helped create these catastrophes in the first place, then something, somewhere, is very, very wrong.

This article was updated at 9.30pm on 23 August to include a response from Oxfam

– Demand that your MP takes a stand on the issue.