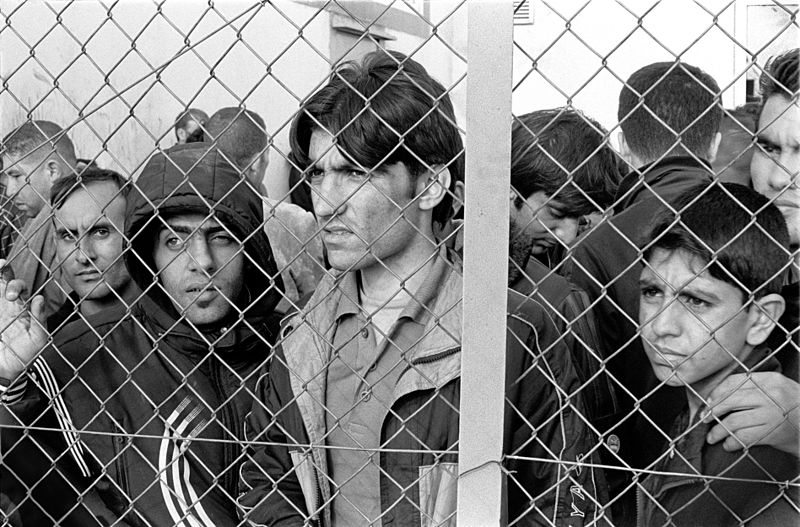 Donald Trump’s notorious proposal for banning all Muslim entry into the US and discussion of possible detention camps for American Muslims sound like the stuff of Orwellian fiction. But the US government has just such a plan sitting on its shelves. And now, the general public can view its shocking contents.

In 1986, the administration of President Ronald Reagan drew up secret contingency plans for the mass arrest and secret detention of legal US residents from Middle Eastern backgrounds who were labelled as “undesirables”. The large-scale plans were summarised in a secret 40-page memo with the title Alien Terrorists and Undesirables: A Contingency Plan.

The government document is now publicly accessible on the web for the first time. Its contents are filled with echoes of Hitler’s Auschwitz, Stalin’s Gulag, and the Japanese-American internment camps. The contingency lays out details of hasty secret trials, mass transport systems to remote facilities, military and CIA involvement, and emergency tents, cots, and fencing.

The once tightly guarded and secretive plan ceded all authority for implementation to the White House, and the US President could ‘pull the trigger’ by issuing a mere executive order. The document even theorises that a president could order the detention of:

any class of aliens whose presence… was deemed detrimental to the public safety.

Detention camps for Arabs and Persians

The proposed programme targeted thousands of Libyans, Iranians, Syrians, Lebanese, Tunisians, Algerians, Jordanians, and Moroccans living legally in the United States, and under no suspicion of having committed any crimes.

Just years after anti-government unrest in Iran and Afghanistan’s Saur Revolution in 1978 had brought left-wing politics to the forefront in the Muslim world, the Reagan administration was already backing anti-Soviet jihadis in Afghanistan. But with its internment plans, it was apparently planning more domestic steps to limit as much as possible the influence of left-wing movements in Muslim countries.

Iraqis were conspicuously absent from the target list of nationalities. This was probably because the US viewed Saddam Hussein‘s repressive nationalist regime as an ally against Iran during the Iran-Iraq War.

The 40-page secret memo outlining the programme, which never took effect, is the subject of a new Politico investigation which seeks answers from those who oversaw it. The memo was originally leaked in 1987 just as it appeared that aspects of the programme might have been implemented with the arrest and lengthy incarceration of a group of Palestinians known as ‘the LA 8‘. These people were arrested and held on ‘suspicion of communism’ for their ties to left-wing Palestinian resistance organisations.

A handful of the shocking excerpts

According to Politico, the secret programme was likely exposed by someone within the Immigration and Naturalization Service (INS) working group – called ‘Group IV of the ABC Committee’ (Alien Border Control Committee) – that oversaw the program.

Readers can access the entire document at Politico, but below are just some of the explosive direct excerpts from the original memo:

–Routinely hold any alien so charged without bond, as a danger to the national security and public safety; vigorously oppose granting of any bond by immigration judges in bond appeal proceedings on that same basis… introduce any material necessary to sustain the government’s position… relating to the submission of classified information to the immigration judge…for inspection and use in arriving at a decision favorable to the government. [p.18, Section 5]

–Lastly, in all such cases, the government should routinely request the immigration judge to invoke the provisions of 8 C.F.R. 242.16 relating to the exclusion of the general public from the hearings on the basis of the national security. [p.18, Section 8]

2) Mass incarceration based on ethnic/national background

–The mission of the INS will be to locate and register, or to locate, apprehend, and remove a body of aliens from the U.S. [p.32]

–A directive to place restrictions on certain aliens or nationalities, can either be issued by the President through an Executive Order, by the Attorney General, or by the Secretary of State. [p.23]

–In order to accomplish the detention of aliens apprehended as the result of any special projects undertaken by INS, a phased approach has been developed… Essentially, it proposes to take advantage of the recently opened Oakdale, Louisiana processing facility in order to house and isolate this population… [p.21]

–It is expected that a combination of the Services bus fleet, charter buses, and the Detention and Deportation aircraft will be sufficient to effect the transportation of aliens to Oakdale. [p.35, Section 2]

–Community is receptive and has agreed to location of such a site and its activation.

–Fence material have been obtained and are stored nearby.

–Site is sized to house up to 5,000 aliens in temporary (tents) quarters, suitable in that southern climate. [p.36]

–Specific intelligence is available on many members of the target group, however, the vast majority are controlled through the normal NIV program. [p.31, Section D]

–Immediate notification, as well in advance as possible, to the Department of Defense as to need for assistance in logistics and facilities. [p.35, Section 1]

–Close cooperation and an exchange of information will be required between INS and other governmental agencies with national intelligence and security functions, including but not limited to the FBI and CIA. [p.13]

Politico‘s investigation reveals that, when the memo was leaked to the attorney for the ‘LA 8‘ case, the Alien Border Control Group IV Committee’s work was halted. But the question remains: How many other similar contingency plans and ‘alien internment working groups’, theoretical or otherwise, are out there? And how have these groups still not learned from the horrors of internment camps in the 20th century?

These questions are made all the more important given the very real prospect of a Donald Trump presidency.

– See this important study about the ‘LA 8’ and anti-Arab racism in America.

– See other international articles from The Canary, and other articles about Donald Trump.