A BBC commentator calls Corbyn supporters 'thick as pigsh*t', but Twitter is having none of it [TWEETS] - The Canary 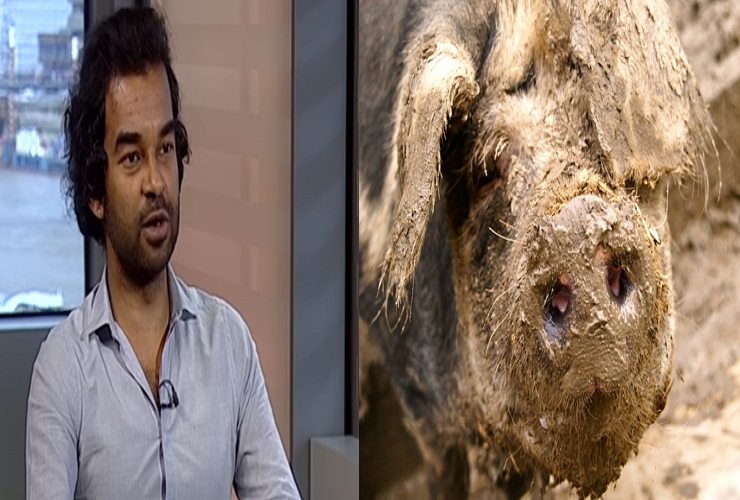 A  BBC commentator caused quite a storm on Twitter on 23 August when he labelled Jeremy Corbyn supporters “thick as pigsh*t”. But social media came to the rescue of Labour Party members. Many may be left wondering: just who’s “thick as pigsh*t”, now?

Janan Ganesh, a columnist for the Financial Times (FT), commentator on BBC Sunday Politics and author, appeared disgruntled over the reaction to “TrainGate”, the furore around Corbyn having to sit on the floor during a train journey to Newcastle. Virgin Trains had released CCTV footage allegedly showing that there were vacant seats on Corbyn’s journey. The implication was that it was a PR stunt by the Labour leader’s team.

Some Corbyn supporters were upset by the implication that he had deceived the public, and were pointing out irregularities in the story. But Ganesh was obviously less than impressed with the outrage. He made his feelings clear via Twitter: 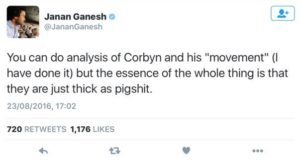 The FT columnist has since deleted the tweet, seemingly unaware of the wonders of modern day technology – the screen grab. This writer spotted his insulting comments immediately, and made a plea for Corbyn supporters to come forward:

If you are a #Corbyn supporter with a PhD or relevant qualification in "Living in the Real World", my DMs are open. https://t.co/jwfCBzADb6

This user was hopeful that increased academic qualifications may increase the rating on the “thick as pigsh*t* scale:

I'm part way through a Bsc. I'm thick but increasing in potential. Does that count?

Others thought that maybe they were getting a bit too big for their boots:

Some pointed to the fact that people with PhDs could also be Corbyn supporters:

This user has multiple qualifications:

And some people may have just been showing off:

No never got a Phd. LL.B, LL.M, CPLS, Barrister and Masters Public Administration from Harvard, so thick as pigshit I guess.😧

But this user’s highly qualified background appears to run in the family:

Although my Mum also a Labour member voting again for Corbyn she does have Bsc, MA, Phd.

And he made a very important point, as well:

and both of us proud to be from a solidly working class family going back hundreds of years.

Some Scottish Twitter users also jumped to the defence of Corbyn and his supporters:

This Corbyn supporter was unsure whether his handful of qualifications was good enough:

OK – I support @jeremycorbyn but I don't have a PhD, however I do have a BSc and I'm a CEng – any use?

Others were more apologetic that they didn’t meet Ganesh’s expectations:

@JananGanesh only got as far as MBA. I am so sorry to be thick.

Corbyn supporter with BA (Hons) sorry it's not a PhD…yet!

Many pointed out that having a university education really isn’t that important:

Level 4 NVQ in Education & Training but 2x professors @ Warwick Uni say I have a 'bright shining mind'. So not thick as pig Shit.

Please excuse the trigger-happy tweet about Corbyn/ites. The train farrago didn't warrant it. No return for British Rail though, pls.

It maybe says more about the ‘media class’ in this country than it does about Corbyn supporters. Labelling the Labour leader’s “team” as “thick as pigsh*t” is not only demonstrably wrong, but it’s also tapping into an age-old stereotype. The idea that the working classes are somehow beneath those who had the privilege of a university education.

It’s a sad reflection on Ganesh, however. He’s not of the ‘Oxbridge’ set, having attended Warwick University and then UCL. So you might expect him not to sneer at, and disparage, a whole group of people in such a way. But then maybe not. He was, after all, interviewed discussing “A defence of the elites” a few weeks ago.

Of course, Corbyn himself didn’t attend university. Instead, after achieving two E-Grade A Levels, he went on to work at a local newspaper, before doing voluntary service abroad. Obviously, the man who could well be the next prime minister is “thick as pigsh*t”, to. This journalist certainly is, having left school at 16 to work in Pizza Hut, washing up.

But anyone with the capacity to see further than the end of their nose will realise qualifications don’t automatically equal intelligence. Nor do people’s political views run in parallel with their intellectual ability. Only in the cossetted world of obtuse, over-entitled, mainstream journalists are people branded stupid for their political views. But if that’s the case, then hundreds of thousands of people are indeed “thick as pigsh*t”. And obviously very happy about it, as well.