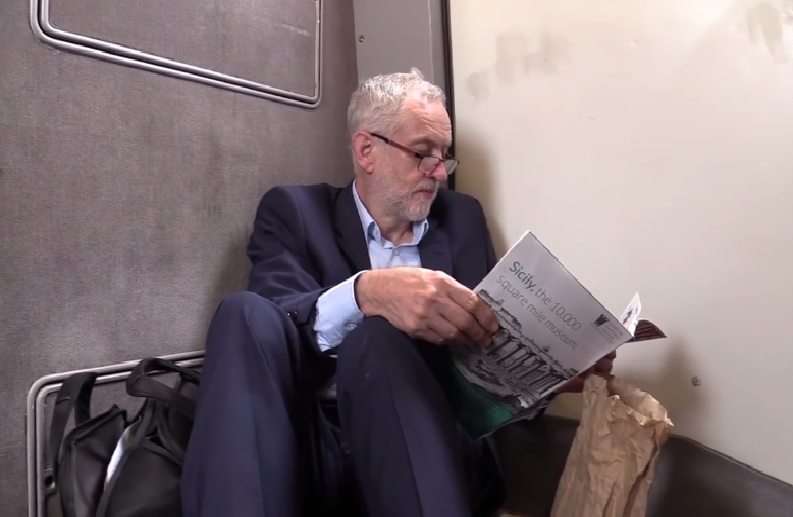 #Traingate exploded onto the front pages on 23 August. Virgin has disputed Jeremy Corbyn’s claim that he was unable to find a seat on one of its trains, and released CCTV footage in an attempt to prove it.

But there has been very little airtime given as to why Richard Branson, who owns the Virgin empire, saw fit to dedicate resources to sourcing the footage and igniting the scandal currently engulfing the Labour leader.

Branson claims that “Mr Corbyn & team walked past empty unreserved seats then filmed claim train was ‘ram-packed’”. Putting aside the fact that the CCTV image accompanying that statement shows only rows of reserved seats, it’s clear that Virgin is miffed that Corbyn suggested its train was “ram-packed” and, worse, used it in a PR offensive to bolster his case for renationalising the railways.

Fellow travellers have confirmed Corbyn’s account of events, and further CCTV images released have been jumped on for being misleading – one carriage Virgin alleged there were empty seats in appears to be the food coach.

More evidence of overcrowding has also been released by the filmmaker who shot the initial footage of Corbyn on the Virgin train.

But although it’s no surprise that Branson is displeased by the negative publicity, and is working hard to counteract it, it is extremely disingenuous to fight back so fiercely against the use of PR, considering his history.

PR for the Planet

The Virgin group, that Branson founded, has a few strings to its transportation bow. Alongside its fuel-guzzling trains, it has an even more energy-heavy airline arm. By 2006, the negative impact of these energy intensive industries on the climate was becoming an unavoidable fact, partly propelled into the spotlight by Al Gore’s An Inconvenient Truth.

So in response, as Naomi Klein’s book This Changes Everything details, Branson gradually launched a three-pronged pledge to use his business to fight global warming. He vowed to spend around $3bn to develop alternative fuels to oil and gas. He set up the $25m ‘Virgin Earth Challenge‘ prize as an incentive for inventors who could figure out how to remove carbon from the air. And he launched the Carbon War Room, which was an industry group formed to battle the carbon ‘enemy’.

For a man whose own business was in part responsible for the climate emergency, these initiatives were PR gold dust.

Fast forward a few years and, as Klein notes, the ‘pledges’ have been redefined as ‘gestures’. The $3bn had materialised as less than $1bn by 2014, and in that same year Jigar Shah, who ran the Carbon War Room, told Klein “I don’t think he’s [Branson] made a lot of great investments in the climate change space”. The Earth prize has also not yet been allocated.

But these ‘gestures’ did enable Branson to expand his aviation business, therefore exacerbating climate change further, while still looking like the good guy. That’s a PR masterclass right there.

Branson’s push back against Corbyn’s alleged use of the train incident as PR for his own political cause may have landed the billionaire in trouble. His train company might have breached data protection laws by releasing the CCTV footage in an attempt to support its claims. The Information Commissioner’s Office (ICO) is already looking into the case:

We are aware of this issue and are making enquiries.

But this would be a small price to pay for the company if its claims were to negatively affect Corbyn’s leadership chances. The Labour leader’s policy for renationalisation of the railways is the true threat to Virgin. As is Corbyn’s support for the NHS Reinstatement Bill.

These are industries (transport and health) that Virgin has a massive stake in. Virgin Care has been awarded numerous profitable contracts in the NHS since it entered the healthcare market in 2010. And Virgin trains have racked up millions in profit, while receiving billions in subsidies from the UK taxpayer. Furthermore, Virgin Money is flying high in the banking sector. It bought up parts of Northern Rock after it collapsed following the 2008 financial crisis.

In fact, over the years there have been few areas of public life that Branson hasn’t had his hand in. He has profited handsomely from the music we listen to, the way we travel, the healthcare we need, the money we bank, and the way we work out.

Corbyn has pledged to renationalise the railways, stop private sector involvement in the NHS, create a public investment bank, ensure the country meets its commitments on climate change, and act against executive pay excess (the very excess Branson has personally benefited from). Implementation of these policies would directly affect the profits of  ‘entrepreneurs’ like Branson.

Surely that’s what #traingate is really about. It’s an opportunistic reaction from vested interests with the intention of devaluing Corbyn so his policies never become a reality. It’s not about what did or did not happen on a train. It’s about how our society will be ordered moving forward.

This a battle of big ideas which could have a profound impact on the future. It’s not about who managed to get a seat on the 11am train to Newcastle.

– Read other Canary articles on Jeremy Corbyn, and rail renationalisation.