The perfect response to the burkini ban, as shops sell out of their collections [VIDEO] - Canary 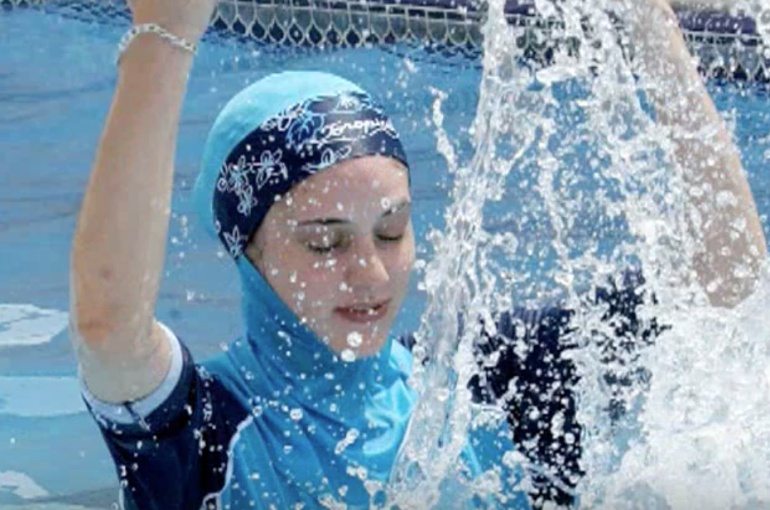 As global sales for the burkini have increased, an Italian imam has posted the perfect response to France’s burkini ban. And it has gone viral across the internet.

Izzeddin Elzir posted this picture of nuns enjoying being on the beach in their habits on Facebook last week:

He hoped to open up a debate about the ban but found his Facebook account blocked after posting the picture.

It has since been unblocked.

The controversial swimwear is now banned in fifteen places across southern France, with critics saying the ban is stupid and sexist. One woman stated:

The burkini allows me the freedom to swim and go on the beach, and I don’t feel I am compromising my beliefs for that… How is a woman on a beach swimming in a wetsuit with her head covered a symbol of Islamic extremism?

But the French police are taking the ban seriously, with photographs showing armed officers making a woman remove her burkini. Another woman was fined for wearing leggings, a tunic and a headscarf on a beach in Cannes.

Even more disturbing is the reaction from some of the other people present. According to an eyewitness, Mathilde Cousin:

The saddest thing was that people were shouting ‘go home’, some were applauding the police… Her daughter was crying.

The ban does seem to be backfiring, though. The burkini is growing in popularity, especially among non-Muslim women. The inventor of the garment, Aheda Zanetti, has seen a boost in sales since the ban. According to Zanetti:

I have a lot of people who like them because they want the UV protection or prefer to cover more of themselves. Not all of us like to be naked.

Zanetti said that the burkini has also given Muslim women the ability and confidence to take part in a wider range of activities:

Now we have Muslim women competing in swimming and marathons and becoming a lot more confident. I used to say, ‘It’s just a swimsuit for goodness sake!’ but that’s not true. It was confidence.

Meanwhile, Marks and Spencer have confirmed they’ve sold out of their burkini range, which they launched earlier in the year.

The Mayor of Cannes has claimed that the swimsuit is a “uniform that is the symbol of Islamist extremism”.

Three women, with the backing of the Collective Against Islamophobia, attempted to overturn the ban. But a judge in Nice ruled that it was consistent with French law, which forbids people:

The wearing of distinctive clothing, other than that usually worn for swimming, can indeed only be interpreted in this context as a straightforward symbol of religiosity.

The judge also referenced the recent attacks in France, saying that the ban was:

in the context of the state of emergency and recent Islamist attacks, notably in Nice a month ago.

But as this video about another burkini designer (Jenny Nicholson) shows, the garment does not look very different from a wetsuit, and it is difficult to see how it can cause offence:

Freedom of expression, whatever your choice

Dictating what a woman can and cannot wear is deeply offensive, whether the mandate comes from a religion or a state. Many women find covering up empowering, and many – religious or not – like the idea of a burkini for both protection from the sun and in order to avoid the leers of onlooking men. It can be just as disempowering to be encouraged to show more and more of your body in skimpy swimwear as it can be to cover it up. This is illustrated in a comment Zanetti received:

‘I enjoy watching women in a bikini—why are you doing this to us?’ And I wrote back, ‘Use your imagination!’

Ultimately, it should be the choice of an individual woman how much (or little) of her body she chooses to show at the beach – or anywhere else for that matter. But one thing is for sure. The ban, in marginalising and targeting Muslim women, will do absolutely nothing to stem terrorism attacks.

In fact, the lack of tolerance represented by the clampdown on religious freedoms will only strengthen and motivate chauvinist arguments on all sides, whether they’re motivated by secularism or religion. And neither is the sort of society that any of us should want to be a part of.

– Join the Wear What You Want Beach Party at the French Embassy, 25th August, 12-2pm.

– Sign the petition against the French ban on the burkini.

– See other Canary articles about France and Islamophobia.