Women are standing together to show solidarity against the burkini ban, and it's utterly inspiring [VIDEO] - Canary 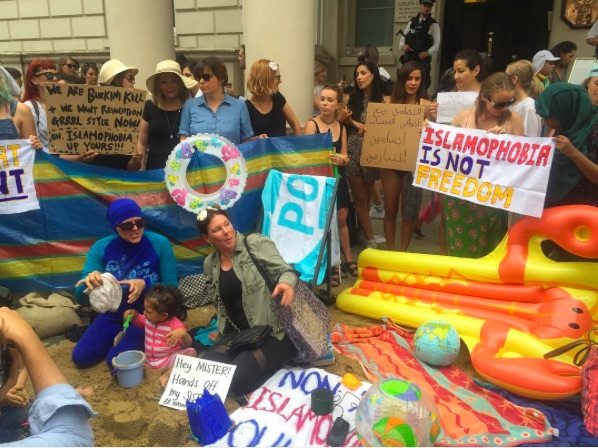 The event of a burkini-wearing woman on a beach in Nice being asked to remove her clothing has sparked widespread outrage. In a short space of time, these angry voices are garnering the attention of almost every media outlet going – and for very good reason. They have something very important to say: let us wear what we want.

It was only on the afternoon of 24 August that a group of independent and incredulous women discussed among themselves the need to make some sort of show of protest – to stress that asking a woman to remove her clothes on a public beach is just not acceptable.

Within 24 hours, an ingenious flash beach party, escalating from a group of 10 Facebook friends to a 4,100-strong show of support, was in full swing. Around 100 women were estimated to have turned up in the drizzle outside the French Embassy in London. The dress code – #wearwhatyouwant.

Lying on sand, women attending the ladies-only beach party passed around a beach ball explaining exactly why they were there.

Attendees of the protest shared similar sentiments. Aina Khan explained to The Canary why she took time out to attend:

I thought it was so important to come along today to how solidarity with my French sisters the fact that they are being told what to wear. It really angers me, especially in the climate of Islamophobia we are living in. 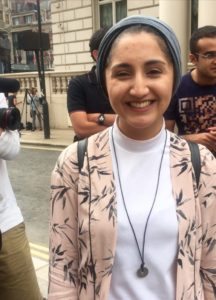 Khan, though pleased with the turnout for the day, said she is hoping for more from people:

I was just saying yesterday that the white feminist community need to come out more and criticise the ban – I’m still not seeing that. So really this is a call – to the French government to repeal the ban – and also our fellow feminist sisters to come out there and show solidarity with us.

On what she would like to see going forward, she says:

The media coverage is great, but whenever Muslim women get coverage it’s always about our clothing. We’re quite exhausted of being spoken to because of our clothing, we’d love to get news coverage because of the things that we do and who we are, not because of what we wear. So it would be great to see things change when it comes to that but I don’t think that is going to happen anytime soon. 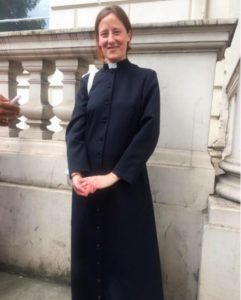 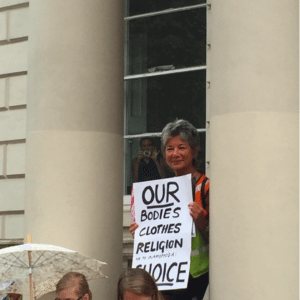 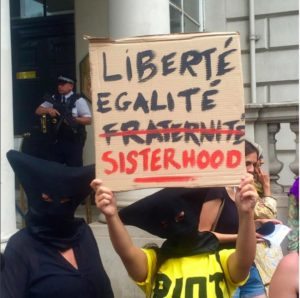 This wouldn’t happen to a nun

One of the organisers, India Thorogood, who was frantically in demand by every media organisation going, reiterated some of what Khan said. Thorogood and friends organised the event for two reasons. Firstly, because it was horrible to see a Muslim woman being targeted by the French state, especially in the current climate.

Secondly, she says, it’s never OK to tell a woman what she can and can’t wear, whatever background you’re from.

While Thorogood and other protesters acknowledge the worrying climate of fear that’s spreading throughout Britain, they certainly feel it would be difficult for a similar incident to occur here. While Islamophobia is a massive problem in the UK,  France has a supposed commitment to secularism that targets women.

Despite the event being for ladies only, one man did turn up in solidarity along with the barrage of media. Abdul Haseeb Punakkath wanted to attend, not only because he considers himself a feminist but because he also sees this as a problem for Muslim men and for men in general. He said that it was a worrying sign of encroachment on the freedom of religion and wider human rights.

The French Human Rights League (FHRL) is inclined to agree. It sees the banning of burkinis as an egregious infringement of rights, that some French prefectures are attempting to impose using the state of emergency as their excuse. The FHRL has raised a case with the state prosecutor to try to repeal the ban.

The events of this week have highlighted a number of things, articulated by protesters today: the current climate of Islamophobia and racism; the swift excuses for the worrying targeting of people on the basis of religion; and the fact that heightened security can apparently make rights abuses easier to dismiss.

On a more inspiring note, however, there are still plenty of people willing to stand behind Muslim voices, and more should be encouraged to do so. Notably, all of the non-Muslim voices made clear that the female Muslim voices should be the ones being heard here.

– Join other protests including an Emergency protest outside the French Embassy on Friday 26 August 2016 6-8pm.

Featured image the author’s own.