Another Labour purge has begun, and this time it's massive [TWEETS] - Canary 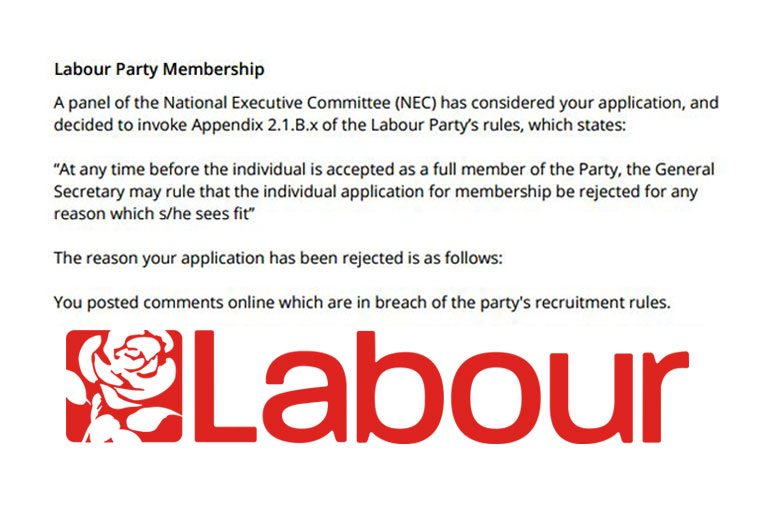 Another ‘Labour purge’ has begun in the run-up to this year’s leadership election. Countless members and potential members are being expelled or having their applications rejected by the party’s ‘Compliance Unit‘. But this time, there appears to be no limit on who the party is willing to disenfranchise. Unless, of course, they are high profile members writing in right-wing newspapers.

There are set guidelines for the criteria that need to be met to become a member. The Labour Party website states that:

By applying to become a member of the Labour Party you agree to accept and conform to the constitution, programme, principles and policy of the Party.

And the ‘procedural guidelines’ for the leadership election declare that:

No abuse of any kind by members or supporters shall be tolerated. All eligible members and supporters must conduct themselves in a calm and polite manner and be respectful to each other at all times. Behaviour including, but not limited to, racist, abusive or foul language, abuse against women, homophobia or anti-Semitism at meetings, on social media or in any other context will be dealt with according to the rules and procedures of the Labour Party.

So those are the rules. All of which appear fairly straightforward and reasonable. But it appears many people are being denied membership on less than scrupulous grounds.

The Canary asked people to get in touch with their stories relating to the ‘purge’. And many came forward. Some felt angry. Others felt disappointed. Many were very upset. But the overwhelming feeling was one of confusion. Nearly 90 people got in contact, and most spoke to The Canary on condition of anonymity.

One potential member’s application was rejected for comments made in December 2015 on Twitter. Specifically, their opposition to the vote to conduct airstrikes on Syria. They had tweeted:

The Tories do have the majority in the House. Most of them are sitting on the opposition benches. #NotInMyName #DontBombSyria

If suggesting that some Labour MPs and members follow the ideology of another party is an offence, then perhaps everyone calling Jeremy Corbyn supporters “Trots” should be banned.

Chris Devismes, another would-be member, was not happy at all:

Absolutely bloody fuming, seems my Labour Party membership has been declined @jeremycorbyn because I RT's something! pic.twitter.com/nbewd0iAgP

Another applicant was rejected for having “repeatedly posted inappropriate comments on social media towards a Labour MP”. They told The Canary:

The only Labour MP I tweet with any regularity is Stella Creasy. And I fully admit to being very robust in my criticism of her. I also engage with her – although to a lesser extent – on Facebook. I strongly disagree with the assertion that any of my interactions with her have been inappropriate. I am, however, very openly pro-Corbyn. I stated my support of him on my application form.

The purge just got strange

One membership applicant was rejected for what would seem the strangest of reasons. The letter from the Labour Party they received cited:

The reason your application has been rejected is as follows: You tweeted in support of the Green Party on 5 July 2016.

The recipient got in touch with The Canary. They said:

I do have some views that were, before Corbyn, considered “radical”. For example, I am against war and murdering civilians for oil. I care about the environment because it’s the foundation of all life (I’m vegan). I don’t think a tiny elite of 0.1% of people should stockpile wealth in offshore bank accounts while others around the world starve or in this country face homelessness and food banks.

Scanning the individual’s tweets for that day shows nothing that could be construed as supporting the Green Party. And it remains to be seen whether a tweet of “support” for another party should be an issue when the Labour leadership supports Green MP Caroline Lucas’ NHS Reinstatement Bill and when Liberal Democrat councillors frequently “switch sides“.

Several people got this standard response: 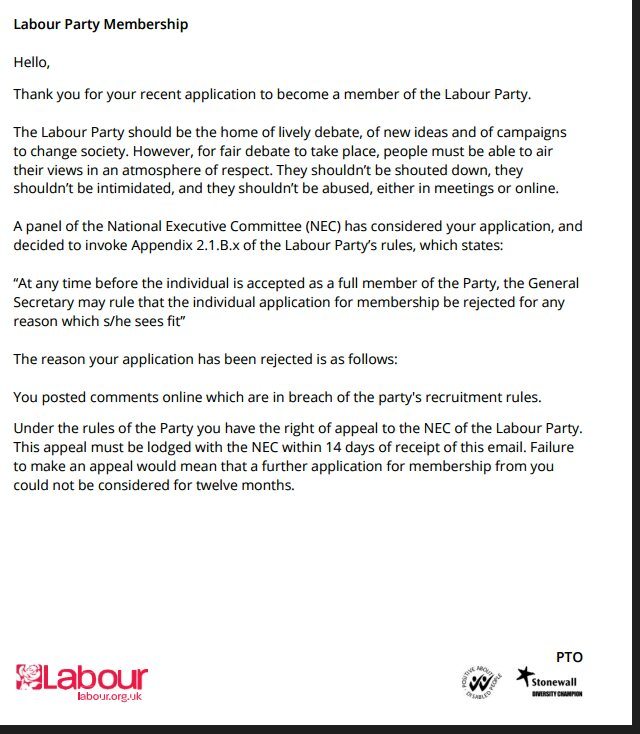 One member told The Canary:

I’m a card-carrying member. I’ve paid three months membership. I’m speechless. I’m not an abusive person, I raise funds for charity. Why would I bully? I was also accepted as a registered supporter and my £25 fee was taken.

But perhaps most concerning is the current Labour Party members who have suddenly been suspended.

One person who contacted The Canary, a director of social services, has been a member for over two decades. This person is not even a Corbyn supporter. They voted for Yvette Cooper in the previous leadership election, and planned to vote for Owen Smith in this one. But they’ve been suspended for alleged abusive tweets, of which they have no recollection.

Another member of several years has been suspended, apparently over an email. This person is retired, lives with mental health problems, and is devastated. They have not been given the details of the alleged email, and cannot work out what it may be. They have contacted their Constituency Labour Party (CLP) for support.

John Dunn, a campaigner for the Orgreave Truth and Justice Campaign, has also just been blocked from voting. He has been a member of the Labour Party for 45 years.

And one anonymous member got in touch to say:

I am one of those suspended from the Labour Party. Allegedly for sending Tweets which contravene party rules. I haven’t commented on Twitter since last May and have NEVER made racist remarks, abused anyone and I don’t use foul language even in my own home. I am 65 and a Labour member for over 20 years. I will not be able to vote in the leadership election and I feel like a criminal despite having done nothing wrong.

Even Ronnie Draper, General Secretary of the Labour affiliated BFAWU union, is subject to the purge:

Just been suspended from the Labour Party, a member most of my life. Democracy in action @jeremycorbyn @NSSN_AntiCuts @resistunite #bfawu

It would seem that there is no rhyme or reason to the rejections and suspensions of membership that are taking place. Innocuous tweets, valid criticisms of the party or its MPs, differences of opinion. All cited as reasons, but all would appear less than watertight.

Labour and famous? Say whatever you want

What is clear is that this process is highly selective. If you’re a grassroots member who says anything deemed inappropriate? Sorry. No vote allowed. But if you’re a political commentator writing in right-wing newspapers, or a senior party member? You can apparently say whatever you like.

Smear people as “lying Trots“? Apply to be a Labour councillor. Call people “Nazi Stormtroopers” in The Daily Mail? Fine, you can vote (and we’ll take your money, as well). Threaten an SNP MP with violence, and call for a trade union to be crushed by the Tories? You’ll be welcomed with open arms. Refer to other members as “Trots” and a “rabble“? Consider yourself Deputy Leader of the party. Use mental health slurs at public meetings? Why not run for the Labour leadership?

But don’t you dare support progressive ideas or stand up for what you think is right and just. If you do, you may also face the Labour purge.

– If your membership application has been rejected, or you have been suspended, advice is available from Why Can’t I Vote?

– If you wish to dispute a decision by the Labour Party, contact them here.

– Write to your MP if you feel you have been unfairly treated.