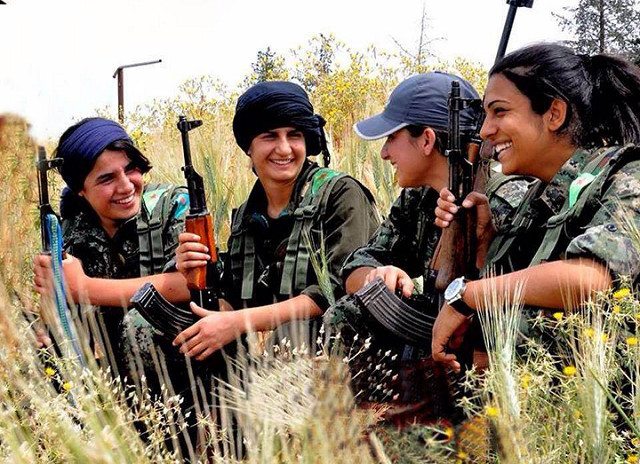 Turkish armed forces have just crossed into Syria with US air support. But this was not an operation focused on pushing Daesh (Isis/Isil) out of the border city of Jarabulus, as some sources have insisted. Amid suggestions of ethnic cleansing against Kurdish citizens and a lack of clashes with Daesh fighters, Turkey’s aim appears to be another entirely.

The shocking truth behind the Jarabulus Offensive

Under the domestic cover of responding to a recent anti-Kurdish terrorist attack (in which suspected Daesh sympathisers killed 54 civilians), Turkish tanks rolled into Syria on 24 August. The assault had been many months in the making.

Reports stated that almost no clashes with Daesh took place in Jarabulus. The group apparently knew the attack was coming, and had evacuated the city days before.

There were, however, clashes between Turkish forces and the multi-ethnic pro-democracy forces which had liberated Manbij (a city to the south of Jarabulus) from Daesh just days before – after a long and hard-fought battle. Turkish shelling allegedly killed 49 civilians in Kurdish-majority neighbourhoods in Jarabulus, encouraging over 3,000 civilians to flee to Manbij.

In what it called Operation ‘Euphrates Shield’, Turkey stressed that its aim was to stop the spread of “terrorists”. Turkey is referring here to the secular democratic forces which defeated Daesh in Manbij or, more specifically, the YPG and YPJ (the male and female militias defending the autonomous communities of Rojava in northern Syria). The YPG/J were a key part of the Manbij Offensive, and have been among the most effective anti-jihadi fighting forces in Syria since 2012.

Ankara has long expressed its animosity towards these groups for not aligning themselves with the Western and Turkish-backed jihadis dominating the fight against Assad in Syria. In fact, it broke off peace talks with the PKK (Kurdistan Workers’ Party) – a Turkey-focused group aligned with the YPG/J – in July 2015 in retaliation for anti-jihadi victories in Rojava.

Turkey’s incursion into Syrian territory saw Turkish special forces support the advance of more than 5,000 Turkish-backed Free Syrian Army (FSA) fighters. These were largely Turkmen forces, such as the Sultan Murat Brigade, Sukur al-Jeber, Sham Front and Feylek al-Sham. Notoriously neo-fascist Turkish nationalists fight within these forces, which have also allied and cooperated with both former al-Qaida affiliate Jabhat Fateh al-Sham and fellow Salafi/Wahhabi group Ahrar al-Sham. But then Turkey’s backing of such forces should come as no surprise given its previous links with Daesh itself.

The US supports Turkey’s assault on the YPG/J

As Turkey’s cross-border operation unfolded, US Vice President Joe Biden visited Turkey. This came only days after Curtis Scaparrotti, NATO’s Supreme Allied Commander in Europe, arrived in the country to prepare the way for Biden.

The Vice President made it clear that he backed Turkey’s strategy, and he ordered the YPG/J to relinquish their recent gains around Manbij. Speaking at a joint press conference with Turkish Prime Minister Binali Yildirim on 24 August, Biden warned:

The PYD [the biggest political party in Rojava] and YPG should not spread across the Euphrates. If they do they will never get US support again.

Turkey’s Jarablus intervention is a hostile approach. The main target of this operation is the Kurdish people and their gains rather than ISIS… We are in our own land and we will not leave it as per some request. We will not act in line with the request of Turkey or some other power. [The] Turkish state cannot shape our position there in accordance with its own interests. Our forces will remain there and there will be no retreat. Nobody has the right to impose [the] YPG’s withdrawal from there and we will never accept such a thing

It has long been suspected that US air support for YPG/J-led operations would only be temporary, and it appears that this coordination may indeed be approaching its end in the wake of Turkey’s cross-border assault.

Recently, Turkey reached an ‘understanding‘ with Syria (and separately with Iran and Russia) to respect Syrian integrity (meaning no Rojava-style autonomy). Back-room negotiations, meanwhile, appear to have been underway between Ankara and Damascus for months – suggesting that a reconciliation between the two countries could possibly be on the cards. One leaked report suggests that the deputy head of the MIT (Turkey’s intelligence agency) has been working on this deal on Ankara’s orders.

The Syrian government, however, has strongly condemned Turkey’s most recent incursion, meaning that any ‘deal’ between Turkey and Syria could well have been jeopardised.

According to the Turkish newspaper Daily Sabah (a pro-regime mouthpiece), Turkish Foreign Minister Mevlüt Çavuşoğlu has said that the US and Turkey had been planning ‘Operation Euphrates Shield’ “for a long time”. The paper added that the US-led coalition forces had been given prior warning about Turkish airstrikes on Manbij on 22 August. In other words, Washington has been complicit (at the very least) with Turkey’s self-interested actions in Syria.

YPG/J under attack from all sides

The YPG/J and their allies now have to defend themselves on two fronts. First, from the Syrian regime, which attacked YPG/J forces in Hasakah Hesîçe)) earlier in August. And now, from the most recent Turkish-led offensive.

But one big question is: Exactly how long will it be until the US completely abandons the YPG/J-led ground forces that it’s been supporting with airstrikes in recent months?

The US is currently desperate to stop Turkey, a NATO member, from getting too much closer to Russia – against which NATO is currently fighting a new Cold War. As a result, Washington is likely to do all that’s necessary in order to keep the Turkish regime sweet – even if that means abandoning the most effective ground forces currently fighting against Daesh in Syria. Head of RUSI Qatar Michael Stephens believes that limited support for YPG/J-led forces will continue as long as they remain “the most successful force in fighting and holding land against ISIS”. But he and other commentators have made it very clear that these forces will not be allowed by Turkey and the US to make further moves against Daesh and other jihadi groups in north-western Syria.

Whatever happens, though, Turkey and its jihadi/nationalist militias will almost certainly make further incursions into Syria in the coming days and weeks to weaken the position of YPG/J-led forces there – and thus the progressive political project of Rojava.

The only real winners in this offensive will be the Turkish regime, Daesh, and Assad. The losers, yet again, will be the Syrian people.