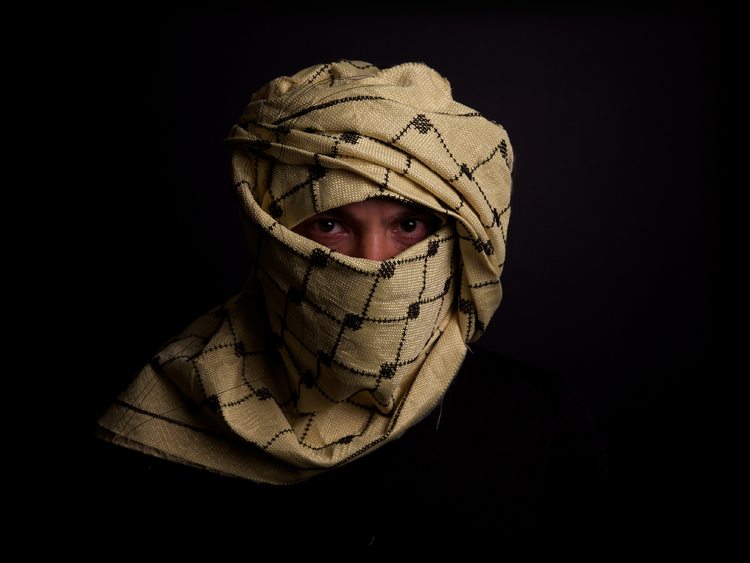 Salim Kadi has designed the first ever bulletproof headscarf, which is much lighter than traditional bulletproof garments but just as strong.

Kadi didn’t design it to stop flying shots, though. Instead, he wanted society to pause, and start a conversation about current perceptions.

And he has done just that.

The chequered headscarf, known as the keffiyeh and traditionally worn in the Middle East, has become a well-known symbol. For some, a symbol of resistance. For others, a symbol of militancy. But actually, it is just very practical. It protects the wearer from the harsh elements of a desert climate (the sun and the sand) and differentiates between tribes. Thanks to Kadi, it could now have a further function, and be bulletproof.

Kadi designed the bulletproof scarf, called the K29 Keffiyeh 001, after smuggling Kevlar®, a bullet-resistant material, into Lebanon from the US, where its export was restricted. Combining it with plastic, he tried different techniques to get the keffiyeh‘s pattern onto it without compromising the structural integrity of the material. He handed the job to a woman from Ain al-Hilweh (a Palestinian refugee camp in Sidon), who embroidered the traditional pattern in between the existing grid of fibres.

It’s pretty lightweight at 300g, but that is no detraction from its strength. It is five times stronger than steel. It’s strength comes from layering the material. Made from a 120 x 120 square, it’s folded into a triangle that forms between nine and 11 layers of Kevlar. Nine layers of Kevlar is apparently enough to stop a bullet from an AK47.

But while this may be a highly appealing commodity in some parts of the world, it’s not yet on the market, and was created mostly as an art project.

His answer is both pragmatic and philosophical. He believes his role as an architect is to create inventions that produce space and involve “an intimate relationship with material, scale, form, structure, the city and the forces that produce it.” He doesn’t believe that means building “confidence in the built environment”, but that he should be disrupting the ongoing status quo and creating pause for thought – space.

Moreover, he says it’s not in his remit to work in isolation, so he seeks to work as part of a community – for the collective concerns and aspirations of those people.

Kadi himself is from Lebanon, where those in power are using excessive force to suppress the possibility for change. But he says this is true whether you’re in the Levant, the Arabian Gulf, Africa, Europe, or the Americas, and that “assumed distinctions between where I live and you live are not as acute as they are often imagined”. He told The Canary:

In Jerusalem, Baltimore, or Aleppo, the keffiyeh seems to operate as a symbol in a universal struggle against injustice. In those images, those who wear it appear to me like fantastic superheroes. Without excluding its rich and multiple histories, I sought to further imbue this symbolism with a function not unlike a super hero cape, mask or bracelet. In the case of the keffiyeh I designed, it is also the case that by borrowing – undermining – the oppressor’s technology of Bullet Resistant Fabrics through appropriation by applying the pattern (the symbol) upon it.

Kadi says there was a lot of conversation surrounding the K29 headscarf. Many ‘What ifs?’. He insists:

It gained an uncanny mysterious quality that revealed and documented people’s hopes, empathy and always fears.

But he denies it is controversial:

It’s only controversial for those who fear the power present amongst the anonymous masses and those fighting for justice everywhere.

Kadi may have a point there. And the K29 probably has a lot of conversation left in it. But Kadi is now continuing further conversations outside his practice in more collaborative projects such as ‘Excavating the Sky‘, which explores the current contexts of Syria.

– Read more Science and Technology articles at The Canary.