Voices on the left of British politics have already condemned the apparent Labour purge against potential Jeremy Corbyn voters in this year’s leadership election. In recent days, many banned supporters have told The Canary their stories. But as time goes by, it’s not just the dignified rage of voters which is bubbling up into the national debate. It’s also the laughter of the right-wing media.

The attempts of the Labour Party establishment to crack down on freedom of speech have already been exposed in recent weeks. But now, the ridiculous events of the most recent Labour purge have burst into the right-wing media once and for all.

On 26 August, The Daily Mail released an article titled:

This piece told the story of new member Catherine Starr, a Corbyn supporter who has allegedly been denied a vote in the leadership election because (according to a 24 August letter from Labour General Secretary Iain McNicol) she “shared inappropriate content on Facebook on 5 March.”

On this day, said Starr, she had only shared a video saying “I f*cking love the Foo Fighters”, a poster about cruelty-free cosmetics, and a vegan cartoon. Here are the posts in question: 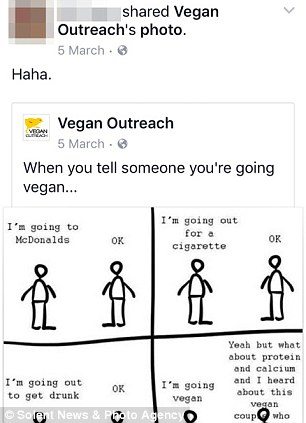 Unless of course the Foo Fighters or veganism are suddenly incompatible with Labour Party principles, The Daily Mail may actually be right to call out the organisation’s suspension of Starr. But one imagines The Mail was more concerned with mocking the Labour Party than it was with the state of the party’s internal democracy.

You know what? We #LovetheFooFighters too.

If the above posts are really the reason why the Labour Party saw it fit to prevent Starr from voting in the leadership contest, then the Labour purge has definitively descended into an utter farce. And the longer party elites allow this to continue, the more the organisation will become the butt of a nationwide joke.

– Read our other articles on the Labour leadership election and the Labour purge.