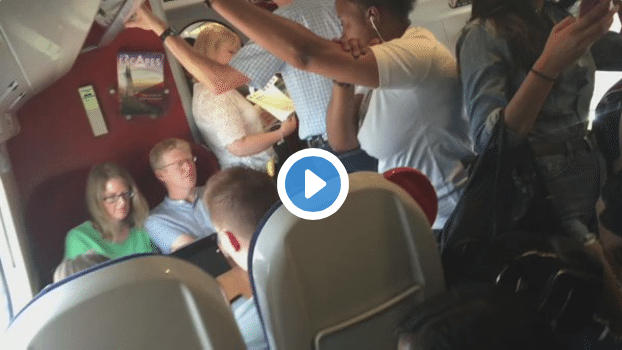 Richard Branson’s intervention in the Traingate smear campaign is rapidly unfolding into a PR nightmare, as Virgin rail passengers use social media to share their own horrific train journeys.

The Virgin billionaire may have contravened data and privacy laws by sharing CCTV footage from Virgin trains in an attempt to undermine Labour leader Jeremy Corbyn’s case for renationalising the railways. He was ably assisted by much of the media, who whipped the smear into a ‘debacle’ by filling their front pages with it for days, and defining the episode as a major gaffe by Team Corbyn, rather than a cynical smear by a business empire facing a direct financial threat.

But where the Fourth Estate failed, Virgin passengers excelled themselves – holding the train company to account by publicizing their own horrific journeys. No amount of shoddy CCTV work and mainstream media bias can put this particularly angry genie back in the bottle.

When they decide to let double the amount of people on the train to Euston! @VirginTrains @richardbranson #sardines pic.twitter.com/pRhVYcG6YE

Just when you thought sitting on the floor next to a smelly toilet couldn't get worse.#virgintrains #TrainGate https://t.co/n0fpmOPRBB

Tweet after tweet showed trains so overcrowded that passengers were standing, wedged together, thought the entire available floor space – hanging on to whatever seat or overhead bars were available to remain upright.

Of course, for many commuters, this is simply an ordinary day. There doesn’t need to be a Bank Holiday or exceptional circumstances. This level of overcrowding, on many train services across the country, has become the standard. No amount of media spin is going to convince the millions of Britons enduring this five days a week, 52 weeks a year, that it is all just a figment of Jeremy Corbyn’s imagination.

But that isn’t the only heat Branson is facing over the furore. Others took the opportunity to point out to the billionaire’s tax exile status. As The Telegraph reported in 2013:

Sir Richard Branson admitted yesterday he had been a tax exile for seven years but denied the move had been influenced by money, rather a love affair with Necker, the Caribbean island he has owned for 34 years.

Britain’s best-known entrepreneur, head of the Virgin Group of companies, defended the decision to make his permanent home on the island after suggestions that he had declared himself a non-resident to gain considerable tax benefits.

While finding every way to avoid paying tax in the UK, Branson has certainly benefitted from the taxes paid by others. That same year, a landmark study by Manchester University’s Centre for Research on Socio-Cultural Change (Cresc) revealed the extent to which Branson relies on taxpayer subsidies to generate profits. As The Guardian’s Aditya Chakrabortty put it at the time:

the only way Branson and the vast majority of train barons make their profits is through handouts from the taxpayer. And while you may know about the direct payments taken by Virgin and others, the Cresc team has also analysed another, indirect transfer from the public purse to private hands. By now, it’s worth £30bn – yet it is barely acknowledged either by Network Rail or Westminster.

Richard Branson may now be regretting throwing those stones from the perceived safety of his glass castle.