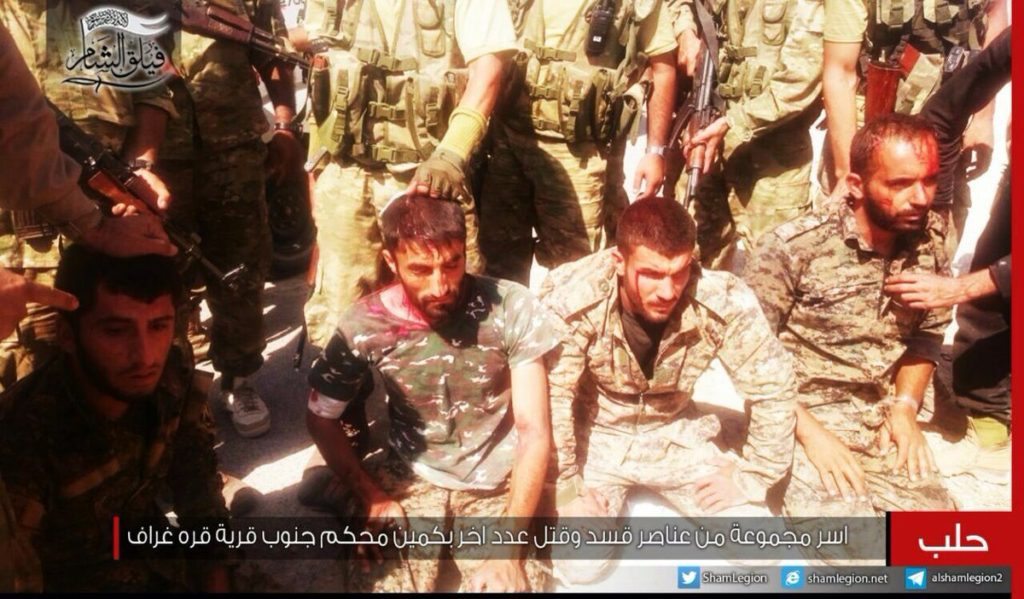 The Canary has previously reported on Turkey’s invasion of Syria on 24 August, and on how this attack wasn’t aimed at Daesh (Isis/Isil) but at the very people who have been most effectively pushing the jihadi group back in recent months and years. And now, Turkish-backed fighters in northern Syria have apparently been caught torturing these anti-Daesh fighters.

The forces backed by Turkey in northern Syria call themselves the Free Syrian Army (FSA). They consist of ultra-nationalist Turkmen fighters allied with former al-Qaeda affiliate Jabhat Fateh al-Sham and fellow Salafi/Wahhabi group Ahrar al-Sham. They also consist of fighters from the Nour al-Din al-Zenki battalion and a number also have links to the Grey Wolves – a notorious neo-fascist group in Turkey. There are also reports of Daesh soldiers swapping uniforms and joining the ‘FSA’ as the Turkish military advances further into Syrian territory.

Plans by some Turkmen fighters to back a Turkish invasion of Syria were first conceived as far back as August 2015. And evidence of collusion between Turkey and Daesh has been nothing short of comprehensive in the past. All this considered, it came as no surprise when shocking images were posted on social media showing fighters from the multi-ethnic but Kurdish-led Syrian Democratic Forces (SDF) being tortured by FSA units.

Syrian news outlet Al-Masdar backed up these claims with a video showing what happened to the SDF soldiers after they had been taken from Jarablus to the jihadists’ stronghold in northern Aleppo.

The US, which has been advising the SDF in recent months and supporting its advances against Daesh from the air, is now backing the Turkish invasion. It deployed F-16 and A-10 “tankbuster” jets in support of Turkish forces (though Turkish President Recep Tayyip Erdoğan may not have fully briefed Washington on his plans to attack the SDF).

After taking the northern Syrian city of Jarablus from Daesh (which had apparently been allowed to leave ahead of the invasion), the Turkish military shelled several SDF-held positions in places like the recently liberated city of Manbij. Turkish armoured vehicles later entered the YPG/J-held area of Kobane (four soon came under attack from the local populace), with the apparent aim of building a border wall between Turkish and Syrian territory.

The SDF also came under attack in Hasakah (Hesîçe) from the Syrian airforce.

The Syrian Observatory for Human Rights has confirmed that, only one day after the invasion by Turkey, at least 20 civilians had been killed and 50 others wounded by Turkish artillery and airstrikes at Jeb el-Kussa, near Jarabulus.

Preventing the creation of a state? Or preventing self-government?

While SDF-held areas in northern Syria have consistently stressed that they do not plan to create a state (they instead insist on democratic autonomy within Syria), Turkey says it plans to stay in Syria until alleged plans to “form a state” are crushed. It also plans to create a ‘safe zone‘ to prevent a link-up between the different SDF-held areas. This zone would likely be controlled by the same Turkish-backed groups described earlier in this article.

Turkish public opinion is sensitive to a situation whereby a Kurdish entity is in command of Turkey’s southern borders. The safe zone — if successfully created — would de facto break the continuity of a future Kurdish entity there.

SDF forces are now under attack from all sides, but continue to resist. The US, meanwhile, is likely to back Turkey – its NATO ally – regardless of the potentially devastating consequences of its anti-SDF assault.