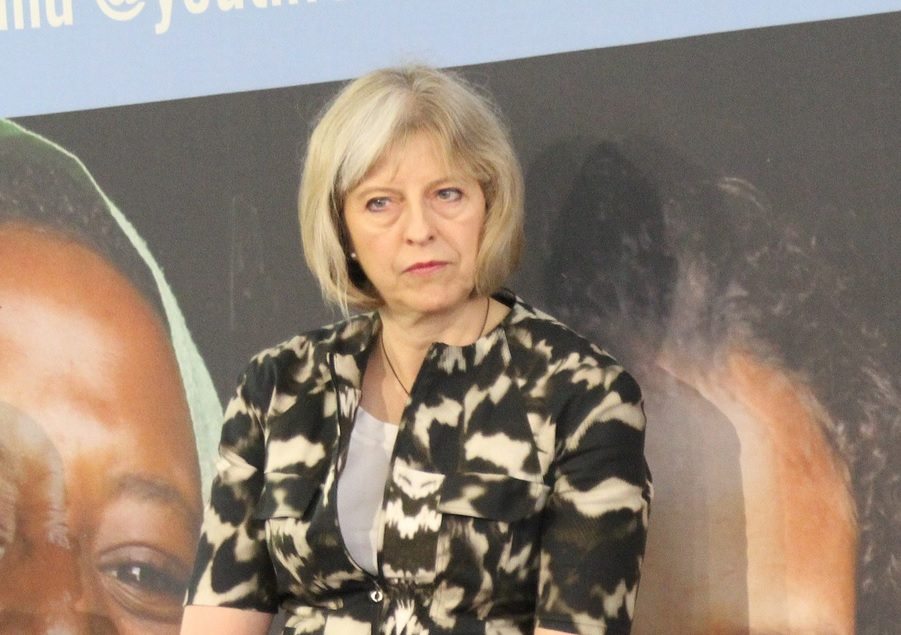 The Daily Mail spent the bank holiday celebrating the Conservative government’s latest proposal. Claiming the news as a “stunning victory” for itself, the tabloid cheered as the Tories laid out plans to divert millions from the international aid budget into funding for war.

In Theresa May’s “social justice” Britain, money that was supposed to pay for peace and prosperity will now be used for more war and destruction. As each new day passes, the Prime Minister’s true colours are revealed.

The UK currently spends 0.7% of its gross national income on international aid, amounting to 7p in every £10. The aid assists Syrians whose lives have been destroyed by conflict. It ensures children in South Sudan still have access to education despite the country being fraught with civil war. It saves countless lives funding the fight against HIV/AIDs, tuberculosis and malaria.

The previous Labour government came to power on a pledge to increase the aid budget, which had plummeted to a mere 0.26% of national income under the Tories before its election. By 2015, under the coalition government, parliament had enshrined in law a commitment to spend 0.7% of national income on aid. This made the UK the first G7 country to legally commit to the UN’s decades-long aid target.

In his resignation speech, David Cameron said “keeping our promises to the poorest people in the world” was one of his proudest achievements as Prime Minister.

Taking the ‘international’ out of aid

But that UK aid legacy looks set to end, after May appointed Priti Patel as the Secretary of State for International Development (DfID). Patel, as the Mail gleefully reported, plans to divert tens of millions of pounds of the aid budget to fund military operations instead, to protect the UK’s “national security”.

A source close to Patel spoke to the Mail about the proposal. The source said:

Following the vote to leave the European Union, British aid and the expertise it provides will work to complement our trade relations and our security.

Reportedly, Patel is also devising ways to use the aid budget to bolster the UK’s trade deals around the world. The Sun recently reported another source close to the minister saying:

Britain’s international aid commitments mean it gets fantastic access to foreign leaders all round the world. We can leverage existing relationships to strike trade deals.

It will be a completely fresh way of looking at Britain’s aid budget.

If these sources are correct about Patel’s “way of looking at Britain’s aid budget”, there are more apt words than “fresh” to describe it. Viewing support you give to others only through a ‘what’s in it for us’ lens is selfish, inhumane and heartless.

And surely ploughing aid into conflict isn’t going to create the productive, healthy, and stable countries with which Patel wants to make all those trade deals.

It’s the Mail wot won it

In its ecstatic coverage of Patel’s proposal, the Mail highlighted its own campaign “against wasteful and corrupt aid projects”. The tabloid has run a series of articles on alleged corrupt use of aid funds.

In March, the DfID insisted one of those reports was “simply incorrect”.

The Mail also started a petition, which gained over 200,000 signatures, urging the government to scrap the 0.7% aid spending pledge. Now Patel has shown willing to misuse the aid budget, by spending it on bolstering the UK’s trade and defence, the Mail lives in hope that she will heed its call. To that end – scrapping the 0.7% pledge – the Mail has promised to give Patel “all the aid she needs”.

It’s all in the choosing

But Patel’s history reveals she doesn’t need any pressure from the Mail to disrespect the notion of aid. As The Telegraph reported, Patel suggested in 2013 that the DfID be scrapped and replaced with “a Department for International Trade and Development”.

Similarly, one of May’s first decisions as Prime Minister was to abolish the Department for Energy and Climate Change, and put responsibility for the future of the planet into the hands of the business department.

Seemingly, for both May and Patel, such issues boil down to what money can be made from them, and how they can benefit ‘us’. But not everyone agrees. Kate Osamor, the Shadow International Development Secretary, commented:

International aid should not be used as a slush fund to bail out the underfunding of defence. UK aid is vital in supporting those around the world most in need and any cuts in that support will have a devastating impact on the vulnerable.

Patel is also likely to face hurdles attempting to align her proposals with current international rules on aid, which do not allow money to be used for troops in a combat role.

But surely the biggest barrier should be convincing the British public that the only valuable aspect of ‘charity’ is the ‘I’ contained in that word.

Is that really the nation we aspire to be?

Image via Department for International Development/Flickr