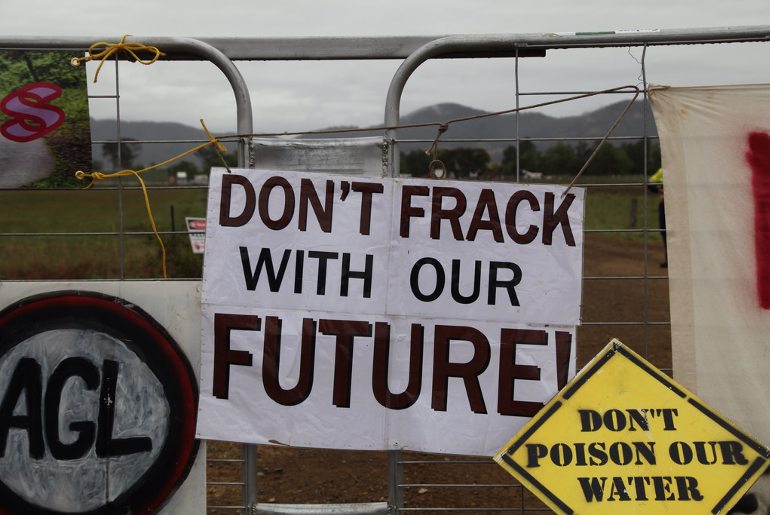 Victoria has become the first Australian state to introduce a permanent ban on onshore fracking and coal seam gas exploration. Hailed as a stunning and inspiring victory of a “grassroots” movement fighting against a strong streak of climate change denial in the national government and the economic might of the fossil fuel corporations.

The decision by Victoria’s government follows a parliamentary inquiry into onshore unconventional gas exploration which received over 1600 submissions, the majority of them stating concerns over fracking and coal seam gas.

This worrying decision for the global fossil fuel industry is due to five years of campaigning by Lock the Gate Alliance (LGA), a coalition of rural communities, farmers, and environmental groups. Phil Gaird of the LGA was complementary of Victoria’s Labor government and its premier Daniel Andrews on their decision, but he had no doubt as to who was due the most praise, saying on the LGA website:

This outcome is a credit to the brave and determined farmers and community groups who have fought long and hard against risky gas mining, and it is reassuring to see that state governments are starting to listen to people and their demands to protect land and water resources. It is ground-breaking precedent that is being watched by people across the country

The decision in Victoria flies in the face of the national Federal government’s pro-fossil fuels stance. Australians may have hoped for a more environmentally progressive Federal government when they voted in Malcolm Turnbull, who claimed he would double clean energy investment and make the biggest reductions in carbon emissions of any G20 nation.

As the elected Australian PM he has pursued a strategy reminiscent of that of the UK’s ex PM, ‘hug a husky‘ David Cameron. Since gaining office Turnbull has made huge cuts to climate science research, invested in a government department promoting fossil fuel use and ended grants to the Australian Renewable Energy Agency.

Most recently, Turnbull has included energy into the environmental ministers brief and appointed Josh Frydenberg as the minister, who argues there is a “strong moral case” for new coal mines and is known as ‘Mr Coal’.

Ellen Sandell, of the Green Party, felt relief for the communities that have been fighting for their local environment by opposing fracking for years, saying in The Guardian:

This decision proves the power of grassroots advocacy… Individuals have won over powerful and influential mining companies, and the Greens are proud to have led the political campaign which forced the government to support a permanent ban.

Sandell also expressed some disappointment that the door had been left open to the fossil fuel companies regarding conventional onshore gas drilling. She is determined to keep fighting until that door is firmly shut.

An area of Victoria roughly one and a half times the size of Wales was threatened by some form of unconventional onshore gas mining before the groundbreaking ban. It was not only concerns for the health of the environment and its inhabitants that prompted the ban. Mark Ogge, Principal Advisor at the Australia Institute said, in The Guardian, the ban was a “sound economic and energy policy”

Ogge raised research carried out in Queensland on unconventional gas extraction that shows the much lauded benefits predicted by the fossil fuel industry had mainly failed to materialise. The research found that for every 10 gas jobs gained, 18 agricultural jobs were lost. Ogge also pointed to the perversness of the gas market that was damaging manufacturing in Australia, saying:

We now have the ridiculous situation that Australian gas is now cheaper in Korea than it is in Australia. That’s a double-disaster for local manufacturing jobs.

What benefits there are, have gone almost entirely to the overseas owners of global oil and gas companies licensed to export Australian gas, largely at the expense of Australian businesses and local jobs.

The victory in Victoria will be music to the ears of the myriad campaigns against the activities of the fossil fuel companies being fought around the globe. The Victorians have provided us with a shining example of the power of an organised community to influence political decisions and oppose powerful interests that wish to plunder the environment.

Support The Canary so we can keep bringing you the news that matters.

Join Friends of the Earth.