A far-right vigilante group is patrolling our coastline, and it's really ugly [IMAGES] - Canary 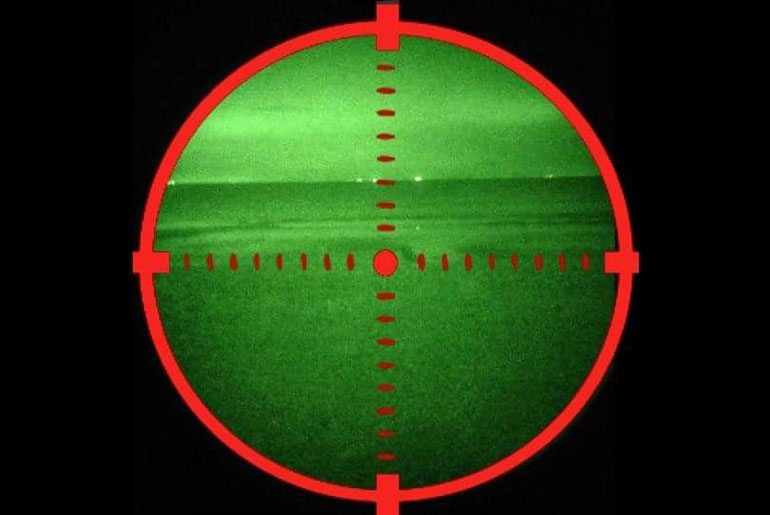 A vigilante group referring to itself as the ‘EDL Coastal Patrol’ has been operating from Dymchurch Beach in Kent. The group, which owns a motorised dinghy, appears to have been carrying out patrols “keeping Britain safe from invaders” since early June, and has been recording its activities in pictures and videos posted to its Facebook page.

The image it has adopted for its logo and profile picture depicts crosshairs staring out to sea:

In one Facebook post, the group shares a video of people in an overcrowded boat, commenting “Somebody sink the f*ckers”: 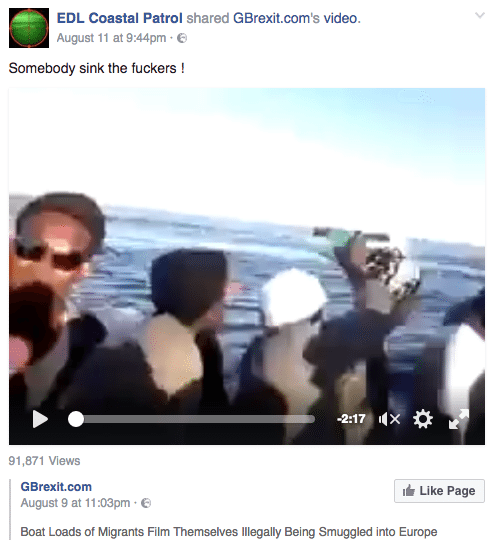 In a video present on the group’s Facebook page on 25 August but which has since been deleted, the group’s most vocal member could be heard saying:

We’ve only just got here and the coast guard’s out, helicopter’s out, it’s over sea, looking for some migrants. Sounds like they’ve drowned, saved us a job [LAUGHS]. Hopefully, hopefully.

In another deleted video, the group members were filmed wearing what could be considered matching political uniforms. Use of such uniforms is banned under the Public Order Act 1936 which was enacted to clamp down on groups like Oswald Mosley’s British Union of Fascists. Although this law has been used infrequently ever since, it was enacted this year to prevent Britain First from carrying out so-called ‘Christian patrols’.

While there is nothing on the page to suggest that the EDL Coastal Patrol is armed, the group has been posting its logo along the beach, which must make for an uncomfortable sight for many local people during a time in which hate crime has spiked: 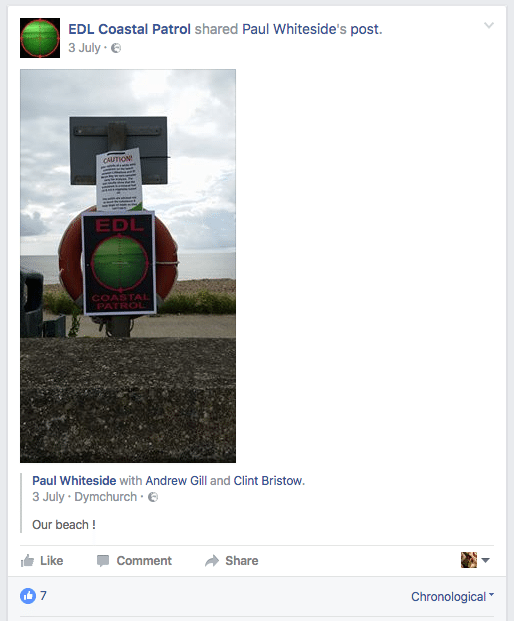 In August, when five young men were killed by underestimating the tide at Camber Sands, the group displayed typical callousness: 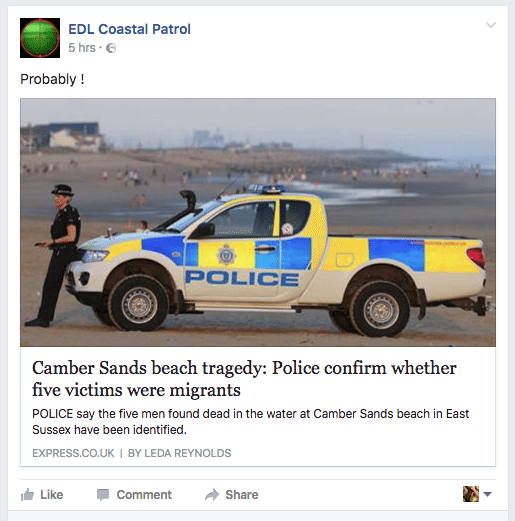 Notably, the Express article linked to in the post above confirmed that the victims were not refugees at all. Rather than reading the article, the EDL Coastal Patrol seemed happy to have simply maintained its unfounded prejudices.

Reading through the group’s Facebook page, it is tempting to laugh at the ‘Dad’s Army’ fantasists. But you have to wonder what would happen if the men were to engage another boat on the water.

What do local people think?

The group also makes frequent reference to locals “loving them”, and it claims to have received support and acknowledgement from the police:

Kent Police denied that it had worked with the group, telling The Canary:

Kent Police is responsible for keeping people safe along more than 300 miles of coastline and does so by working with partner agencies including HM Coastguard, the UK Border Force and the RNLI.

Officers respond to reports of incidents along the coastline like they do when they respond to incidents inland, by assigning the most appropriate patrol.

When patrols attend a report they often interact with members of the public, however, the only community groups Kent Police officers go on patrol with are members of the Street Pastor scheme who assist those a little worse for wear in the evenings, and search and rescue volunteers who help look for vulnerable, missing people.

We encourage people to report incidents to us instead of taking the matter into their own hands.

Although this statement doesn’t condone the actions of the EDL Coastal Patrol, it also doesn’t go very far in terms of condemning them either. This is a group of vigilantes who are recording videos of themselves laughing about people coming to harm – and doing their utmost to put themselves in positions that will make such harm considerably more likely to happen.

The refugee crisis and the far right

Many of the people risking sea travel to Europe in barely serviceable vessels are fleeing war zones. In some countries, refugees are being welcomed not with hope but with death. Whether they are refugees or economic migrants, they are all human beings. To visualise them in crosshairs like you would do with vermin on an exterminator truck clearly dehumanises them, but it also dehumanises those who picture the world in such brutal and hopeless strokes.

The rise of the far right in Britain has been marked by figures like Nick Griffin, Nigel Farage, and even Tommy Robinson attempting to portray their groups as respectable organisations that shun the violence and blatant racism of past groups like The National Front. But thanks to their constant pressing against societal norms, cultural sensitivities are being eroded, and we now find ourselves in the position where people are happy to broadcast openly racist opinions on Facebook Live. The fact that these opinions are only slightly regurgitated versions of those being spewed by mainstream news sources like The Sun and commentators like Katie Hopkins makes it difficult to see why they didn’t have the confidence to broadcast them earlier.

Historically, vigilantism, lawlessness, and racism have not led to progressive and forward-thinking societies. And, while it’s tempting to laugh at the EDL Coastal Patrol, laughing will not make them go away. The public needs to be clear that illegal vigilantism will not be tolerated. The recent court decisions against Britain First were a step in the right direction. It is now vital that Kent Police takes control of the situation before somebody gets hurt.

– Contact Kent police on Twitter and encourage them to deal with their vigilante problem before it grows out of control.