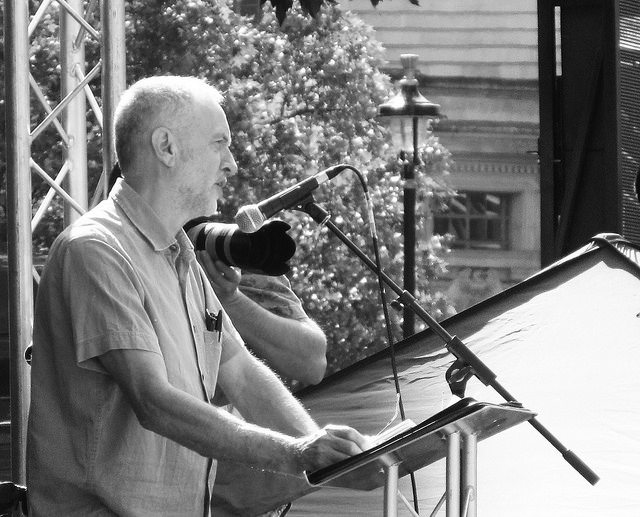 A reader of The Canary has got in touch to tell us his father’s story of his time in the Labour Party. It’s truly uplifting, and a testament to the sense of hopefulness Jeremy Corbyn has brought to so many Labour supporters.

35 years ago, Mark Anthony France first exercised his right to vote. And not only did he vote for someone he trusted implicitly, but someone he knew would do their best for constituents. This person was his father.

From the factories of Birmingham to the Miners’ strike

Barry France was born on 29 January 1939 in Birmingham. He first joined the Labour Party in the 1960s, after he was elected as a Shop Steward for the National Union of Vehicle Builders (NUVB). The NUVB would later merge to become the Transport and General Workers’ Union (TGWU). He worked at the giant Longbridge plant in Birmingham when it was the British Motor Corporation. Mark’s grandfather also worked at the Longbridge plant, riveting Hurricanes during WW2, as did most of his relatives.

Barry’s commitment to the Labour Party grew in the 1970s. His whole family became active to ensure victory for Labour in both the general elections of 1974. They doggedly canvassed, leafleted, attended meetings and rallies, and ran committee rooms. In 1981, Barry became the first Labour councillor elected to Worcestershire County Council. He represented Rubery, home to many workers at the nearby Longbridge Plant.

Mark told The Canary that his father was full of enthusiasm for the party (and the movement more broadly) during this time:

My dad was filled with hope that the tide was turning against the hated Thatcher Government. He was a supporter of the growing socialist wing within the Labour Party, gravitating around Tony Benn. He wanted to turn his talent for organising into a full time commitment to the Party. So he applied for a job as a Labour Party Organiser. Barry was successful and moved to the Tory Heartland of Hertfordshire with Jem [his wife] to become a full time worker for Labour. Barry and Jem helped build vibrant campaigning Labour Party Branches that raised significant amounts of money for the Party.

During the National Union of Miners (NUM) strike of 1984/85, Barry and Jem worked tirelessly to raise funds to support striking miners and their families. Jem was especially proud that the last pit to return to work was Maerdy. Her own father and brother had worked at the pit, before the former was killed in occupied Germany on 1 April 1945.

But after the defeat of the NUM, it became clear to Barry that electoral breakthrough for Labour in Hertfordshire was unlikely. So he applied to move north to work for the party in West Yorkshire.

In Huddersfield, Mark says his father was pivotal in the party’s success:

My dad was based in Huddersfield for over a decade. He contributed to a dramatic revival in Labour’s fortunes. From having just seven Councillors in Kirklees in 1986, Labour became the majority controlling the Metropolitan Council. He worked really hard to ensure the election of the first councillors representing previously and marginalised sections of the working class from the Muslim, Sikh & Afro-Caribbean communities.

Barry was also instrumental in electing his local MP:

My dad’s efforts in the Colne Valley Constituency led to the selection of Kali Mountford who went on, against all predictions, to win the seat for Labour in 1997. His mild manners, good humour, and gentle ways of empowering others to participate in campaigning helped overcome the resistance of some local Yorkshire folk to this ‘comer in’ with the strange Brummie accent.

Throughout the 1980s and early 1990s, Barry and Jem attended Labour Party conferences as delegates or visitors. They were supporters of the socialist bloc in the party, as an honest straightforward expression of their left wing instincts. In every single by-election, Barry and Jem would always make a huge effort on the campaign trail. They often travelled the length and breadth of the country to work in distant constituencies. As the centre-right gained the upper hand under Neil Kinnock’s leadership, they remained loyal, disciplined party members. But they opposed the increasingly bureaucratic attempts to stifle democratic debate in the Labour Party.

The start of ‘modernisation’

Things began to change, however, after Tony Blair came to power in 1994. As Mark told The Canary:

My dad’s effective work as an organiser in West Yorkshire; his record of building up party membership; strengthening party finances; helping the party to dramatically improve its electoral performance. All of this meant nothing when a new regime was imposed following Blair’s election as Labour leader.

He says that his father felt that the ‘Blairites’, under the guise of ‘modernisation’, began to impose their control over the Labour Party apparatus at every level. Mark says his Father:

became the focus of a campaign to force him out of his job. His workload was increased as the ‘Blairite’ managerial techniques insisted on production of ‘spreadsheets’ and endless ‘reports’. He was expected with, no increase in pay, to take organisational responsibility for five Constituencies.

He was targeted by a new managerial hierarchy. Established working relationships based on concepts of pluralism, tolerance, mutual respect and ‘comradeship’ were shattered as sharp suited young careerists waving laptops and mobile phones issues instructions and demanded obedience.

By the end of 1996, Barry (who had never had a single day off sick in 14 years) began to experience sleepless nights and was diagnosed with high blood pressure. The seeming campaign against him took its toll. He reluctantly decided to take early retirement. But in effect, Mark says, the Blairites had broken his spirit and forced him out:

They even conspired to prevent him being selected to stand as a local councillor. The Blairite-approved candidate who was selected to stand ended up losing what should have been a safe Labour seat. For a long time Jem and the family had to cope with my dad’s deepening depression, as he was unable to find a new job. The repressed anger at his treatment by the Blairites was eating away at his soul.

But Barry had to pull himself together when something tragic happened. Within weeks of Jem retiring from her job as a special needs teaching assistant, she suffered a major stroke and Barry became her primary carer.

They attended the Labour Party conference together once more before Jem died. As Mark recalls:

We were in the autumn sunshine, underneath the shadow created by the statue of Harold Wilson, in St George’s Square, Huddersfield. I remember my dad disassembling my mum’s mobility scooter and stowing it in the luggage compartment of the coach. He helped Jem on board, joining his children, grandchildren and old friends and comrades. We all arrived in Manchester on 23 September 2006.

Barry and Jem were no longer welcome inside the conference. Not as delegates or visitors. So instead they joined the throng of Stop the War protesters, marching in protest at Blair’s invasion of Iraq. Mark remembers his father helping Jem to manoeuvre her mobility scooter through the crowds. But everyone was polite and full of energy. As they came closer to the conference centre, Barry and Jem joined in the chanting of: “Tony Blair terrorist! Tony Blair terrorist!”

Now, Barry is an increasingly frail 77-year-old pensioner. He lives alone, but Mark says he copes well with the disabilities caused by a series of strokes and the still painful memories of the losing his beloved wife Jem, who died in 2012.

He has never forgiven Blair and his apparatchiks, who effectively ended his involvement in (and love for) the Labour Party. But he still remains a member.

Mark spoke with his father on the phone on 23 August. His speech is severely restricted by the effects of the strokes, so he struggles to form coherent sentences. But Mark says:

I could sense he was smiling despite the distance between us. And he said clearly “I just voted for Jeremy Corbyn!”

After more than 50 years service to the Labour Party, often at a cost to his health, Barry France finally feels back at home in the organisation he loves so much. His unshakeable resilience, commitment, and resolve in the face of adversity are a humbling lesson to all Corbyn supporters, young and old.

The Canary salutes you, Barry. And thank you for sharing your story.

– Support The Canary if you appreciate our articles.