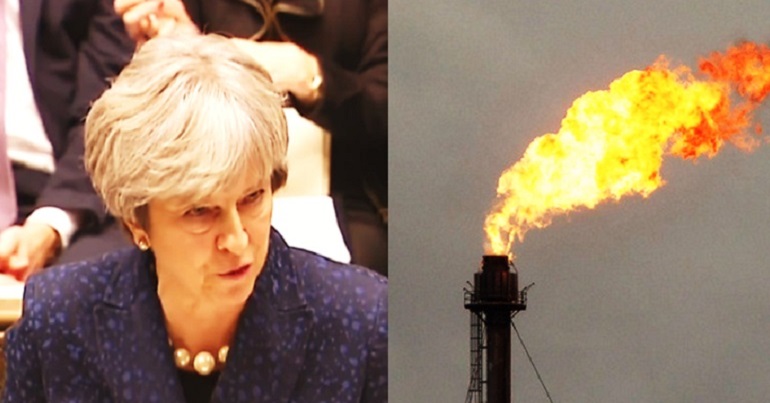 A group of campaigners has stopped ‘protecting’ a site in North Yorkshire from a fracking company, claiming it is “not going to be fracking any time soon”. But there’s more to the group’s withdrawal than meets the eye, because it claims the company has just had “the final nail” hammered into its coffin. And documents, which the government has refused to comment on to The Canary, seem to back up the campaigners’ claims.

The government granted Third Energy a licence to extract shale gas by hydraulic fracturing (fracking) at the KM8 site in the village of Kirby Misperton in North Yorkshire, after the county council granted it planning permission in May 2016. So local residents and Friends of the Earth went to the High Court to challenge the decision in December 2016.

But the judge ruled in Third Energy’s favour and work has been progressing to prepare the site ever since. Meanwhile, residents and campaigners who call themselves ‘protectors’ set up the Kirby Misperton Protection Camp. It aimed to highlight the opposition to fracking that exists in the area.

Third Energy has been dogged by controversy during the course of its operations at KM8. Recently, The Canary revealed that the company lost millions of pounds in successive years; owed £44m to its Cayman Islands-registered parent company; did not file its 2016 accounts until 2 February 2018; and has been threatened [pdf] by the government with being dissolved.

The protectors told The Canary:

In January 2017, we pledged to the local community that we would remain and continue the campaign of direct action until Third Energy were no longer a threat to the area. The last two weeks have seen convoys of fracking equipment leaving the site, and this week we celebrated as the rig was finally removed. It’s clear that Third Energy are not going to be fracking any time soon, and so the time has come to begin packing up the Kirby Misperton Protection Camp.

Third Energy has hit back. A spokesperson told The Canary:

We are sure that the residents of Kirby Misperton who have had their daily lives disrupted by the activities of the protesters, many of whom are not local, will breathe a sigh of relief at the news they are leaving the area, as will our employees and suppliers who have been regularly intimidated and threatened…

In January, the Secretary of State confirmed that he was satisfied that Third Energy has met all of the thirteen technical requirements set out in section 4A of the Petroleum Act 1998. We are currently working with the government on the final step of the regulatory process which involves providing the financial information requested to facilitate the final Secretary of State consent for our Hydraulic Fracture Stimulation programme near Kirby Misperton.

On completion of the approval process we will finalise our operational arrangements and move forwards with the Hydraulic Fracture Stimulation and production of the KM8 well; delivering some much needed gas for power. We thank the local community for its patience and can confirm that Third Energy plans to be working in the Vale of Pickering for many years to come.

It is now reportedly holding off any fracking until the “autumn”:

Supposed to be sending one out imminently. Although having initially confirmed October, apparently they would now rather say "autumn"… 🤷‍♀️

But what Third Energy’s statement doesn’t say is that its technical requirements under the Petroleum Act 1998 are, according to the protectors, incomplete. This is because planning permissions for pipelines and a generating station associated with the KM8 site will expire [pdf, p4] on 19 May 2018. And part of the requirements of the Petroleum Act 1998 are that onshore pipelines have planning permission.

On 1 February, Third Energy submitted [enter a search for “Third Energy”] seven applications for extensions of planning permission to do with the well sites, pipelines and a generating station. It states [pdf, p11] that these “screening opinions” [pdf] (the first stage of planning applications):

[cover] “conventional” gas operations on the wellsite only and [do] not cover any activities associated with the hydraulic fracturing of the KM-8 well, or other “unconventional” operations.

But the protectors claim this is not the case.

Third Energy’s fracking operations rely [pdf, p2] on the pipework in question to supply water to the KM8 site for the fracturing process. Also, if fracking is successful, Third Energy says [pdf, p5]:

The gas produced will be transported by the existing pipeline to Knapton [generating station] and used to generate electricity.

So while Third Energy has planning permission to frack at KM8 until 2026 [pdf, p10], the infrastructure associated with it loses its permissions in May.

The protectors believe the council will not grant a new licence to Third Energy because of the age of the pipeline which opened in 1995 [pdf, p3]. At the time of publication, a decision had not been made by the council. North Yorkshire County Council didn’t respond to The Canary‘s request for comment.

This is just the latest in a catalogue of errors and poor practice that we have seen from Third Energy and yet another reason why they can’t be trusted as a ‘safe operator’.

The secretary of state must take this omission into consideration when giving the final permission to frack and we hope he will see that, following a whole host of mistakes, major health and safety breaches, and severe financial losses, this company can not be trusted to frack in Ryedale.

With Third Energy currently millions of pounds in debt, losing millions year on year, and suppliers pulling equipment off site early, this could be the final nail for Third Energy.

We struggle to see how they can recover from this latest setback and doubt they will return anytime soon to frack at KM8 (if at all) – if they do come back, we will be ready to fight them off again!

Third Energy confirmed that it has applied for extensions of the planning permissions. It told The Canary:

In parallel with the preparations for the KM-8 fracs and waiting for final consent, we have continued to invest in and develop our existing conventional fields. We are pleased to report that initial results from our project to enhance gas flows are showing encouraging results. As part of our ongoing investment in the conventional fields, we have initiated the process of extending a range of permissions for the Vale of Pickering well sites and pipelines and the Knapton Generating Station, as we seek to align the permissions across the infrastructure to 2035.

Third Energy failed to acknowledge to The Canary whether these planning permissions, if refused, would render its fracking operations at the KM8 site redundant.

In the documents for the extensions of planning permissions until 2035, Third Energy says [pdf, p12]:

So it appears that Third Energy is aware that the proposed extensions of planning permissions do affect its fracking operations.

The Canary spoke to the Department for Business, Energy and Industrial Strategy (BEIS) at length over Third Energy’s planning permission applications. We asked what legislation they would fall under and whether it would affect the business secretary’s permission for the company to frack.

But BEIS said it would not provide any information or comment ‘on the record’, so The Canary cannot release details of its communications with the department.

The protectors summed up by saying:

We now begin the process of returning the camp to its former state, and will be arranging community work days over the coming weeks, during which we look forward to celebrating with everyone who has been involved. Please look out for these dates to be announced and for the details of our final closing ceremony.

We end this with a warning to any fracking company planning to exploit this land for your own profit and personal gain: expect us.

Fracking: dead in the water?

Campaigners’ concerns about fracking are far-reaching. They range from polluted drinking water and earthquakes to its contribution to greenhouse gas emissions. But while the Kirby Misperton protectors are optimistic about Third Energy losing its right to frack in their local area, the Conservative government is still adamant that shale gas extraction is the way forward for Britain’s energy needs.

However, the government’s commitment to fracking is at odds with the direction UK energy is taking. As City AM reported in December 2017, renewables such as wind, solar, tidal and biomass created a record-breaking amount of energy in 2017. In fact, those four fuels accounted [paywall] for 29% of the UK’s total electricity generation. It seems illogical that, when such vast amounts of energy can be produced by green methods, the government would still commit to extracting fossil fuels from the ground.

Meanwhile, in North Yorkshire, it appears the battle against fracking has been temporarily won. But whether the war is over or not remains to be seen.