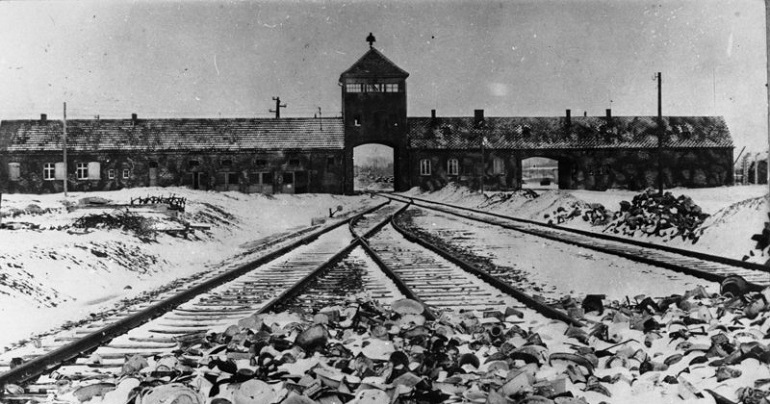 The Polish government is trying to rewrite its country’s role in the Holocaust. And while far-right nationalists are happy about that, the efforts have sparked anger and concern across the world.

The ruling Law and Justice Party (PiS) is changing Poland’s anti-defamation law in an attempt to stop people around the world accusing the country of complicity in Nazi war crimes against Jews during World War Two. The aim is to move focus onto Polish suffering. And the law is essentially encouraging a rewriting of history. But it’s just another step rightwards for a government which has reduced the independence of its judiciary and whose followers have marched alongside white supremacists and fascists.

The move has played right into the hands of Poland’s ultra-nationalists, who apparently see any criticism of the Orwellian law as “Jewish aggression”:

Protesters in Warsaw on a freezing Monday evening had a clear message for president Duda: "Stop Jewish aggression on Poland." The next day, Duda delivered what the far-right, anti-Semitic groups (and the government) wanted. https://t.co/x1BX34ByzT pic.twitter.com/MNJHNsUZAj

There's been a lot of idiotic and inflammatory nonsense on both sides of this debate, but this may well be the worst so far, from right-wing Polish weekly @DoRzeczy_pl pic.twitter.com/1uCgj8kXQ7

'Attack on Poland. How to hold off this brutal storm?'

Inside: 'Has Poland fallen victim to pre-prepared strike of information warfare?', 'When Poles began to demand dignity, a collision with anti-Polonism was inevitable. The IPN law is just a pretext, like attack in Sarajevo' pic.twitter.com/Xx7dRIOsGt

A Polish public broadcaster, meanwhile, aired an interview on 24 February with a Catholic priest who reportedly said:

For us, the truth corresponds to facts. For the Jew, truth means something that conforms to his understanding of what’s beneficial.

The bitter truth that we must never forget

In the occupation that followed Germany’s invasion of Poland in September 1939, Poles were starved and enslaved with brutal ferocity. Tens of thousands of Poles were kicked off their land to make room for Germans, who rounded up intellectuals and political elites, prohibited speaking Polish in some areas, and closed or destroyed Polish cultural and educational institutions. Aside from the over 3 million Polish Jews murdered in the Holocaust, it is estimated that the Germans killed at least 1.9 million non-Jewish Polish civilians during World War II…

However, historians have also revealed Polish complicity with Nazi horrors. As The Intercept points out:

One of the most prominent researchers, Princeton historian Jan Gross, found historical records that documented the slaughter of 1,600 Jews by their Polish neighbors in 1941 in the village of Jedwabne, outside Warsaw…

After the first wave of mass killings of Jews began in 1941, the commander of Poland’s Home Army, Gen. Stefan Grot-Rowecki, sent a telegram to the exiled government in London complaining that its pro-Jewish rhetoric was costing it support. “Please accept it as a fact that the overwhelming majority of the country is anti-Semitic,” the general wrote…

Looking at hundreds of other accounts from the time, Gross concluded one reason that so relatively few Poles risked their lives to hide Jews was the very great risk that they would be denounced to the Germans by other Poles.

Standing up for balance, and against the manipulation of history

Gross has called Poland’s law change “a disastrous attempt to stifle… historical research and historical debate”. He also says it’s “a totally lame effort to transform and change historical consciousness in Poland through just legislating a falsehood”. Yad Vashem, meanwhile, has insisted that “restrictions on statements by scholars and others regarding the Polish people’s direct or indirect complicity with the crimes committed on their land during the Holocaust are a serious distortion”.

One American Jewish group responded with a video of people pledging to break the law and speaking of a “Polish Holocaust”. But other Jewish organisations criticised this response. American Jewish Committee head David Harris, for example, said the video was “deeply troubling and misguided” and “only makes a bad situation worse by sweepingly and inaccurately accusing Poland of waging a ‘Holocaust’ against the Jewish people”. And because it’s clear that German Nazis planned and built the death and forced labour camps in Poland, Yad Vashem has stressed that “there is no doubt that the term ‘Polish death camps’ is a historical misrepresentation”.

The actions of the Polish government are a sign. We must stop the far right.

Poland’s history-twisting government isn’t a lone voice of insanity in Europe, though. As one tweet from Human Rights Watch‘s Andrew Stroehlein makes clear, there are numerous politicians across the continent who are currently “fanning the flames of hate”:

The past must serve as a lesson.

We must not let these divisive figures win.

– Also read more from The Canary on racism and fascism. Support Stop Funding Hate. And join The Canary if you believe in journalism that holds the powerful and hateful to account.