Now a sniper has killed a Palestinian nurse, we know why Israel's military deleted that tweet - Canary 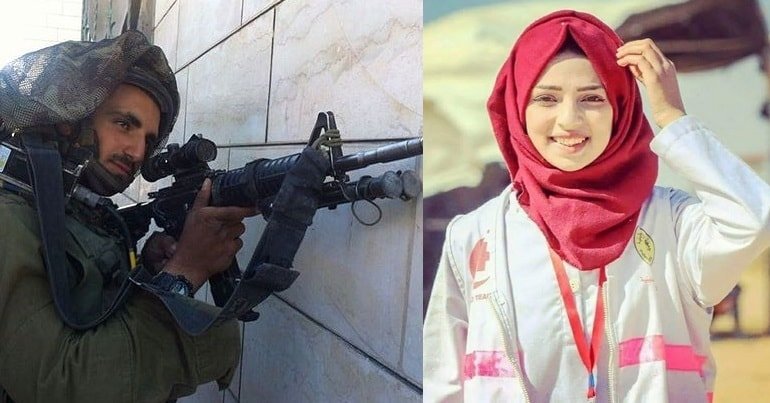 An Israeli sniper killed a 21-year-old Palestinian nurse on 1 June. Now, it seems even clearer why Israel’s military deleted a tweet earlier this year. The army wrote that it “know where every bullet landed”, while tackling protestors. But it looks like the bullet that killed Razan al-Najjar could represent a war crime.

For two months, Palestinians have been protesting the conditions in occupied Gaza where less than 4% of water is drinkable. The Great March of Return rallies also marks the 70th anniversary of the establishment of Israel, when  750,000 Arabs were forced out of Palestine. Israel has responded with force, killing at least 121 Palestinians and wounding over 12,000 since 30 March.

A witness told Reuters that medic al-Najjar was running to help a wounded person when Israeli forces killed her. The young woman was wearing a white uniform and “raised her hands high in a clear way, but Israeli soldiers fired and she was hit in the chest”, according to the witness.

Under the Geneva Convention, it’s a war crime to harm unarmed medics with distinctive identification signs. With killings like al-Najjar’s, it’s no wonder the Israel Defence Forces (IDF) thought again about the impression its tweet gave:

In response to the killing of al-Najjar, the IDF said it was looking into the report. The military also claimed that soldiers were acting “in accordance with the rules of engagement”.

But the young Palestinian is far from the only medic shot by the IDF. In a single day in May, Israeli forces injured 18 “clearly marked” paramedics with live fire. Of those 18, the IDF killed Mousa Jaber Abu Hassanein.

Israeli soldiers are killing medics, journalists and protestors with apparent impunity. So it seems clear why the military wants to maintain some ambiguity. That tweet gave the impression that soldiers are acting in line with orders from above. It had to go.