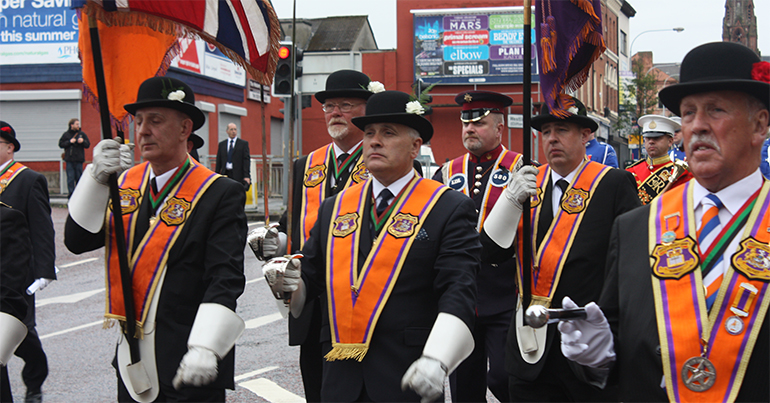 The Equality Commission for Northern Ireland has called out [pdf, p24] the DUP on sectarian decision-making.

It found [pdf, p1] the Department for Communities (DfC), headed by DUP minister Paul Givan, “failed to comply with its approved Equality Scheme” when cutting funding for the Irish language. And at the same time increasing [paywall] funding going to Orange Order halls.

DUP minister Paul Givan cut funding to an Irish language bursary scheme called Líofa in December 2016. Martin McGuinness cited this decision as one of his reasons for resigning as deputy first minister. Then, in 2017, after public outcry, Givan was forced into an embarrassing U-turn and restored Líofa funding.

Líofa (Irish for ‘fluent’) aimed to support “a greater number of fluent Irish speakers”. It was in receipt [pdf, p3] of funding from the former Department of Culture, Arts and Leisure (DCAL) from 2012 until 2016. DfC assumed DCAL’s responsibilities in May 2016 and cut Líofa’s funding for 2017. In the meantime, DfC increased [pdf, p4] funding for the Community Halls Pilot Programme, which benefited [pdf, p11] Protestant organisations like the Orange Order.

This Community Halls Pilot Programme was to [pdf, p4] “invest in community halls and prioritise those in the worst condition”. And it aimed [pdf, p4] to reach organisations “who do not wish to attract Lottery funds”. The Orange Order claimed it did not wish to attract lottery funding because of its links [paywall] to gambling. But it received [paywall] £350,000 lottery funding regardless.

The Community Halls Pilot Programme budget increased [pdf, p4] from £500,000 to £1.9m. The majority of successful applications were [pdf, p11] protestant organisations such as the Orange Order.

The Equality Commission for Northern Ireland found [pdf, p24] the DfC “failed to comply with its approved Equality Scheme” in assessing both Líofa and the Community Halls Pilot Programme. The Commission also found [pdf, p24] it didn’t use “tools of screening” to assess the likely impact “on the promotion of equality of opportunity”.

The Commission recommends [pdf, p26] the DfC should:

prepare an equality assessment (screening and EQIA, as necessary) of the Líofa Bursary Scheme to inform any future submissions to the Minister to seek approval for an annual funding allocation

it is clear that there was a deliberate agenda to target and get rid of this scheme. This was just the latest in a long line of decisions from DUP Ministers attacking the Irish-language and Irish-medium education.

As stated by the Commission, duties on equality must [pdf, p.15] be of “substance” and not merely a “tick boxing” exercise. This must be applied to all communities equally, and there should never be a repeat of such sectarian decision-making.