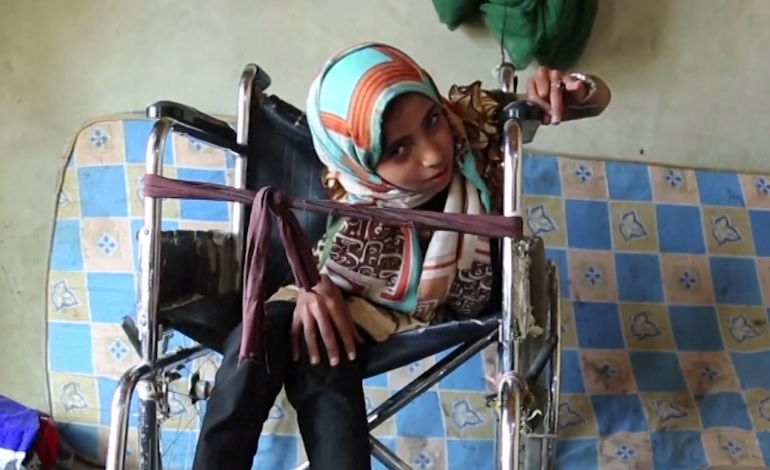 Over half a million people have listened to a child’s message released just before Christmas. The 13-year-old Yemeni girl – Amran – calls on all “free people” around the world to help stop the war in her country.

2018 is just round the corner. Let’s make a resolution to ensure this young girl’s wish comes true.

Al Jazeera released Amran’s video on 21 December. That was the 1,001st day of the war in Yemen. Since 2015, Saudi Arabia has been carrying out a brutal military campaign in the country. In a two-week period in December alone, the Saudi-led coalition reportedly killed 136 civilians with bombs.

Amran wants the world to end this. And her story shows why it’s so vital we do.

In the video, Amran begins:

I call on all the free people around the world to stop the war in Yemen. I used to walk and go to school normally just like all children.

But an airstrike badly wounded Amran’s back in 2015. So now, she can’t play or go to school like she used to. Her parents also can’t afford to pay for an operation, as her father hasn’t received his civil servant wages for 18 months.

And Amran’s been ‘luckier’ than many. Because she’s, at least, still alive. In September, the UN documented that 1,184 children had been killed in the conflict. Over eight million Yemenis, including children, are also on the brink of famine. Yet, as journalist Iona Craig has reported, the Saudi-led coalition is targeting civilians’ food supplies.

Meanwhile, the International Committee of the Red Cross (ICRC) revealed that Yemen has reached a “hideous milestone“. There are now one million suspected cases of cholera in the country.

As Amran says, this war must stop. And throwing aid at the country isn’t enough. Especially for governments that can help end the conflict in other ways. The UK is one such country. Because it provides masses of military and diplomatic support to Saudi Arabia. Ending this would really damage Saudi Arabia’s ability to wage its scandalous war.

Many doubt the UK government has the moral fortitude to do so. But despite planning a trade deal with the US, the UK just took action against Donald Trump’s decision to declare Jerusalem Israel’s capital. It voted against him in a UN Security Council and General Assembly vote, in the face of US threats.

So let’s demand the UK government shows the same courage with Saudi Arabia. For Amran’s sake. And for other children like her.

– Write to your MP and demand action on Yemen.