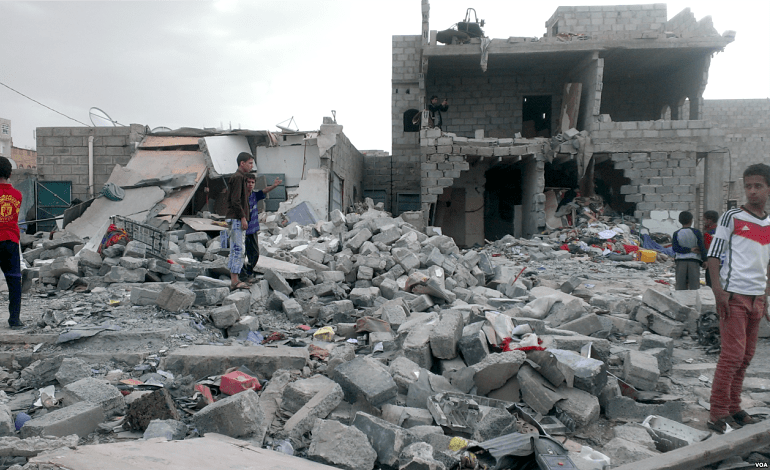 A deadly and devastating attack in Yemen has triggered demands for action with Amnesty International describing it as a “night of horror”. But for anything meaningful to take place to stop the conflict, the current international silence and inaction will need to end.

An air raid in a residential area of Yemen’s capital Sanaa killed at least 14 people, including five children, after bombings on 25 August destroyed two buildings in the Faj Attan district.

Reports suggest the Saudi-led coalition carried out the raids. In response, the coalition said in a statement that it would review its operations in the area at that time.

Some are concerned about the target of the attack. Hakim Al Masmari, the editor in chief of The Yemen Post, for instance, told Al Jazeera:

There is no military base anywhere near the site of the attack, it’s a residential area

The entire country is mourning the deaths. It is unexpected and unbearable when civilians are killed.

And, according to Amnesty International, when civilians are present, even if there are military targets in the area, the attack is likely to be disproportionate.

Lynn Malouf, Middle East Research Director of Amnesty International has called on the UN to take measures against Saudi Arabia:

In the aftermath of this night of horror there are serious questions for UN leaders, who last year made the shameful decision to remove the coalition from the list of violators of children’s rights in conflict.

This “night of horror” comes after a devastating week in Yemen. An earlier airstrike on a hotel on Wednesday 23 August killed more than 40 people. And it was one of over two dozen airstrikes that took place in and around Sanaa in one night.

But the latest attack appeared to be the last straw for some. Yemeni Foreign Minister Abdel-Malek al-Mekhalfi took to Twitter to call for an investigation:

What happened today in Fag[sic] Attan in the capital by the fighter jets against the civilians requires an investigation by the coalition.

And al-Mekhlafi is a part of the Hadi government. The Saudi Arabia led coalition weighed into the conflict in March 2015, backing the Sunni government led by President Hadi in a war against the Shia Houthi, who formed a new government in November 2016.

But looking towards UN leaders to reprimand Saudi Arabia may be a fruitless task.

UN member countries, including the UK, have a vested interest in protecting Saudi Arabia. The UK, for instance, has licensed £3.8 billion worth of arms since the war began in March 2015.

Andrew Smith, from the Campaign Against Arms Trade (CAAT) said:

The bombardment of Yemen is getting even worse, and yet the arms sales are still flowing.

The UK has licensed billions of fighter jets and bombs to the Saudi-led coalition, at the same time as it is inflicting a brutal humanitarian crisis on the people of Yemen.

If there is to be a peaceful solution in Yemen then it cannot come from more arms sales and bombings.

But other solutions also remain problematic. Especially as the UK sits as a permanent member on the UN’s Security Council, which will have the final call on any resolution regarding Yemen. And as a report notes, the oversight of past resolutions on Yemen has not been impartial because of members’ bilateral relations with Saudi Arabia. Meanwhile, the UK has used secret evidence to defend a legal challenge over its arms sales to Saudi Arabia,

The lack of media coverage on Yemen compounds this lack of international action. Foreign journalists struggle to access the region while reporting inside the country remains dangerous for local journalists.

The number of air raids taking place in Yemen each month is three times higher than in 2016, and fighting is intensifying. A conservative death toll states there have been over 10,000 casualties and over 3 million people are displaced. In addition, almost 2,000 people have died from cholera since April 2017. And 17 million people are food insecure.

The situation in Yemen is desperate and to stop innocent civilians from suffering any further, the silence that surrounds this conflict must end.

– Support the Campaign Against Arms Trade who are working to stop arms sales to Saudi Arabia.