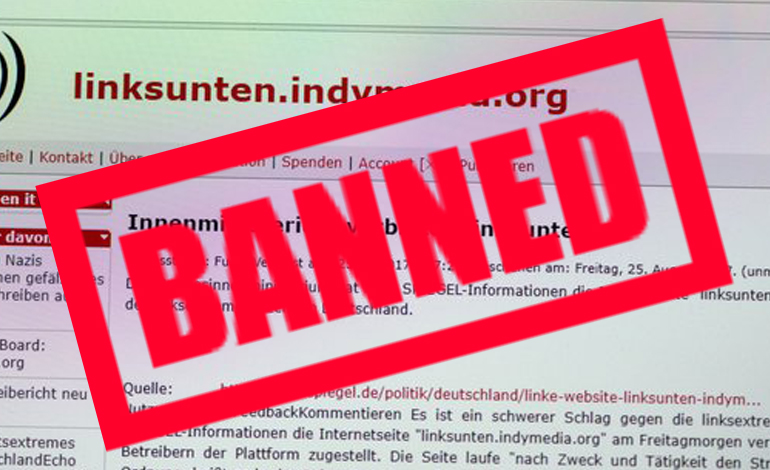 In the aftermath of recent protests against the G20 summit held in Hamburg, the German government has shut down a website. It is now a criminal offence to use Linksunten Indymedia. The independent media page is described as “the most widely used German-language platform for radical politics and organizing”, and its closure is seen as part of a wider attack on radical infrastructure. But some suggest this is a display of law and order in the run-up to the country’s elections.

The German Interior Ministry banned Linksunten Indymedia on 25 August. Minister Thomas de Maizière stated the government closed the website down for “sowing hate against different opinions and representatives of the country”. News outlets in Germany receive legal protection under freedom of expression; to step around this, the Interior Ministry classified the independent media site as an “association”.

This move is supposed to show the German government opposes “left-wing extremism on the internet”. De Maizière stated:

This is the expression of a behaviour that tramples human dignity. This is absolutely unacceptable and incompatible with our liberal democratic order. For radical, violent extremists – whatever their orientation – there is no place in our society

National elections will be held in Germany on 24 September. As a result, some critics say it is a move to win votes for the Christian Democrat party, which de Maizière belongs to alongside current Chancellor Angela Merkel.

Following huge anti-capitalist protests against the G20 gathering in Hamburg on 8 to 10 July, ministers in the German government called for a crackdown on what it calls ‘leftwing extremists’. De Maizière said at the time:

The events surrounding the G20 summit must be a turning point in our view of the leftwing scene’s readiness to use violence.

Revenge by the State?

The criminalisation of the independent media site has consequently been tied directly to the protests. Sister site Indymedia Germany released a statement saying:

This is a serious attack on the leftist movement and freedom of the press … The background to the ban is the debate following the heavy confrontations during the G20 summit in Hamburg in July. At that time ‘harsher action’ was demanded by different parties against the ‘left extreme’ scene. The ban now seems to be a symbolic expression of this shortly before the Bundestag elections.

As de Maizière announced the ban, another Interior Minister, Thomas Strobl, also of the Christian Democrat party, announced that several properties in Freiburg were being raided. Though no arrests were made, police seized computers they claim were used to maintain the website. Items the police describe as weapons were also taken, including batons and slingshots.

Start of a slippery slope

Ulla Jelpke, parliamentary spokesperson for left-wing party Die Linke, explained that this ban is legally problematic. By classifying a website as an association, it makes everyone involved with a website liable – even if they have no direct connection with posts considered extremist. She also raised the question of who this mindset could target next:

The ban has motivated solidarity across the world. US anarchist network Crimethinc highlighted the problematic idea of ‘free speech’, with the German website’s ban as an example of how hypocritical it can be:

This also shows how dishonest far-right and statist rhetoric is about free speech – in fact, these hypocrites only use that discourse to position themselves to suppress others’ speech.

By using a phrase such as “left-wing extremism”, a link is imposed on the radically inclusive goals of left-wing groups such as Linksunten Indymedia users and the oppressive aims of far-right groups. And by targeting the website as an association rather than as media, an attempt is made to scare people away from being involved in any sort of radical activity – even if they aren’t themselves sharing ‘illegal’ information.

Although the short-term goal of this ban could be to win votes for the upcoming election, the long-term implications are severe. An attack on independent media in one of the world’s most powerful countries should be outraging people everywhere.