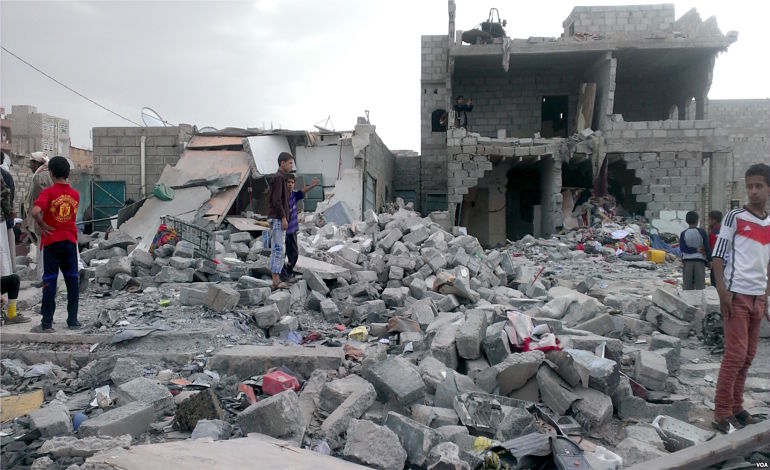 The UN has called for an international investigation into violations of human rights in Yemen. On 5 September, it released a report that calls the ongoing war there an “entirely man-made catastrophe”.

Because of its ongoing sale of arms to Saudi Arabia, the UK government is complicit. And this apparent focus on business over human rights shows just how messed up its priorities are.

The reticence of the international community in demanding justice for the victims of the conflict in Yemen is shameful, and in many ways contributing to the continuing horror.

In March 2017, the UN’s Stephen O’Brien called this war “the largest humanitarian crisis in the world”. But since then, the situation has got worse.

According to the report:

And in June, the World Health Organisation said that Yemen faced the “worst cholera outbreak in the world”.

Since March 2015, the Saudi Arabia-led coalition has been fighting Houthi forces in Yemen and those loyal to former President Ali Abdullah Saleh. And according to Human Rights Watch, the Saudi-led coalition is:

Despite denials by the Saudi foreign minister, the UN report clearly states that:

Coalition airstrikes continued to be the leading cause of child casualties as well as overall civilian casualties. Some 3,233 of the civilians killed were reportedly killed by Coalition forces.

The full report also links [p9-10] the UK to the coalition:

The BL-755 is designed to be dropped from the UK Tornado fighter jet, scores of which the UK has sold to Saudi Arabia.

Theresa May’s relationship with Saudi Arabia has raised many questions. As has the fact that, since 2015, the UK has licensed £3.8bn of arms to the authoritarian regime.

BAE Systems is a major beneficiary of these sales. It is “the world’s third largest arms producer”. And according to Campaign Against Arms Trade (CAAT):

BAE’s warplanes have played a central role in Saudi Arabia’s attacks in Yemen.

BAE is a ‘platinum sponsor’ of the DSEI arms fair in London from 12 to 15 September. And companies like BAE will try to profit from destruction and war. But a week of action to raise awareness and prevent the arms fair is in full swing. This culminates on Saturday 9 September with the Big Day of Action.

The UN report on Yemen clearly suggests that Theresa May’s government has the blood of innocent children and civilians on its hands through its continued support for Saudi Arabia. But to truly hold it to account, we all have a role to play.