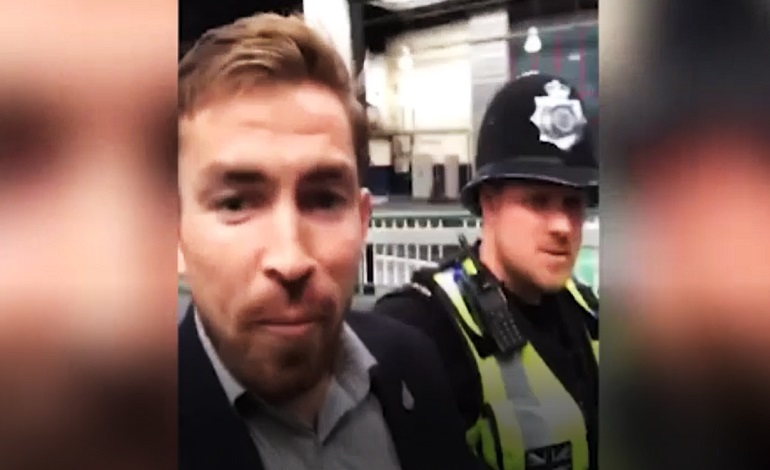 On Thursday 7 September, staff reportedly stopped a disabled man with a prosthetic leg getting on a Virgin train, because they didn’t believe he was disabled.

Andy Grant is an Afghanistan war veteran who had his leg amputated in 2010, after a blast in the war injured him. But that didn’t seem to matter to Virgin Trains staff and the police.

Grant had just lost his wallet near Euston Station in London, so had lost his bank cards and his disability travel pass. But he did have an E-ticket, and tried to board a Virgin train with this. Grant explained in a Facebook post:

When i activated the ticket to board the train they [Virgin staff] asked to see my railcard. I realised it must be in the cafe so I ran back to the cafe to look for it. It wasn’t there

I ran back and explained that I had lost my wallet. The Virgin staff said ‘tough, You need to go [and buy] another ticket’.

I explained that would be impossible as I don’t have my wallet now.

He was told what?

The member of Virgin staff allegedly then asked Grant:

how do we know you are disabled and have a railcard?

Grant said “because I got blown up in Afghanistan”, and then showed the member of staff his prosthetic leg. But after she still didn’t believe him, he tried to explain the situation to the manager. And Grant says it was at this point that:

police/security came running down, grabbed me and starting pulling me away, saying tough, you have been told.

Grant caught some of the incident on his smartphone:

Luckily, Grant’s friend was on hand to buy him a ticket home.

The Liverpool Echo reported that Virgin Trains has since apologised, saying:

We’re very sorry to hear about Andy’s experience and we’ve asked him to get in touch with us so we can resolve this for him.

But Grant’s experience will be all too familiar for many disabled people.

As The Canary has previously reported, Disabled People Against Cuts (DPAC) campaigner and Steer Group member Paula Peters was subject to abuse and discrimination from a London bus driver. Peters claims that the driver said: “Fucking disabled people shouldn’t be allowed on any bus.”

The Canary has also documented how a disabled man had to drag himself onto a train because no staff were available to support him with his wheelchair. This happened on more than one occasion.

But disabled people still face major challenges when trying to access rail stations; because only 20% of all train station are accessible for disabled people. And on the London Underground, the situation is just as bad. Only 70 out of 270 tube stations have a degree of step-free access; and of these 70, only 35 are fully accessible from the platform to the train.

In the 21st century, Grant’s experience on Virgin Trains is shocking. But what’s more shocking is that, for most disabled people, having your travel restricted is a near-daily occurrence.