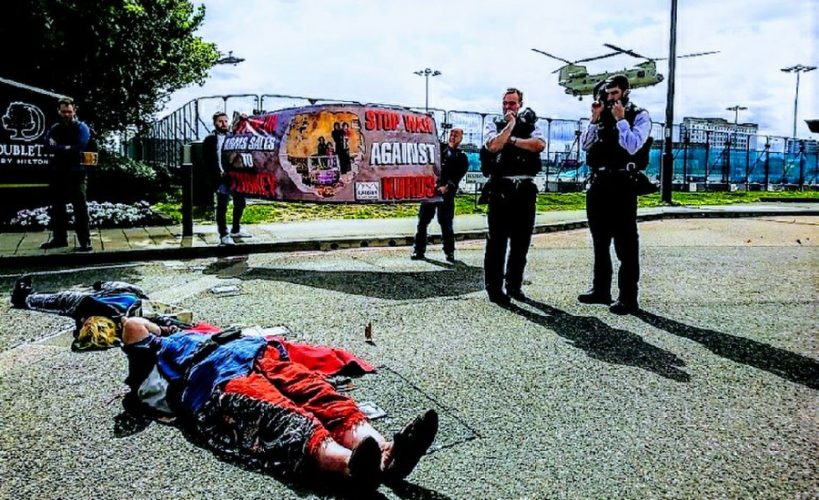 On 9 September the might of the world’s military was met with some fierce opposition in London. And the Metropolitan Police didn’t seem quite sure what to do about it.

Stop the Arms Fair (STAF) organised a week of action to halt the Defence Security Equipment International (DSEI) arms fair before it starts. As The Canary’s Emily Apple, who was on the ground at the STAF action all week, previously reported:

DSEI itself takes place between 12 and 15 September at the ExCeL Centre in East London. In 2015, arms dealers from 61 countries queued up to view the wares of 1,500 exhibitors. 14 of the countries invited, including Algeria and Bahrain, had authoritarian regimes. Four, including Saudi Arabia and Pakistan, have been listed by the UK as having human rights issues. And a further 11 countries on the list, such as Ukraine and Iraq, are currently at war.

Demonstrations happened throughout the week, with people performing ‘lock ons’ to lorries, blockading roads and camping out. Groups working alongside STAF included legal observers from Green and Black Cross, the Network for Police Monitoring (NetPol) and the British Quakers. But the action came to a head on 9 September, with STAF’s “Big Day of Action”.

A ‘carnival of resistance’

Around 500-600 people were at what STAF called a “carnival of resistance”. There were numerous stands, promoting specific causes like the International Campaign for Freedom in the UAE, which is raising awareness of the country’s lack of democracy and use of forced disappearances. Book stalls, food stands and artwork sat alongside discussion groups, music and speeches. The event was overall family-friendly. But the main objective of the day was to continue the blockade of the ExCeL centre.

Initially, two women performed a lock on (where people chain or padlock themselves together, or to an object) at the entrance to one of the ExCeL centre’s hotels. After standing by, seemingly bemused, police set up a cordon around the women, and would not let people through; claiming ‘breach of the peace’ laws forbade it. But it took police nearly two hours to remove them, during which time bystanders were forcibly removed from the area, children separated from their parents and The Canary was even threatened with arrest: 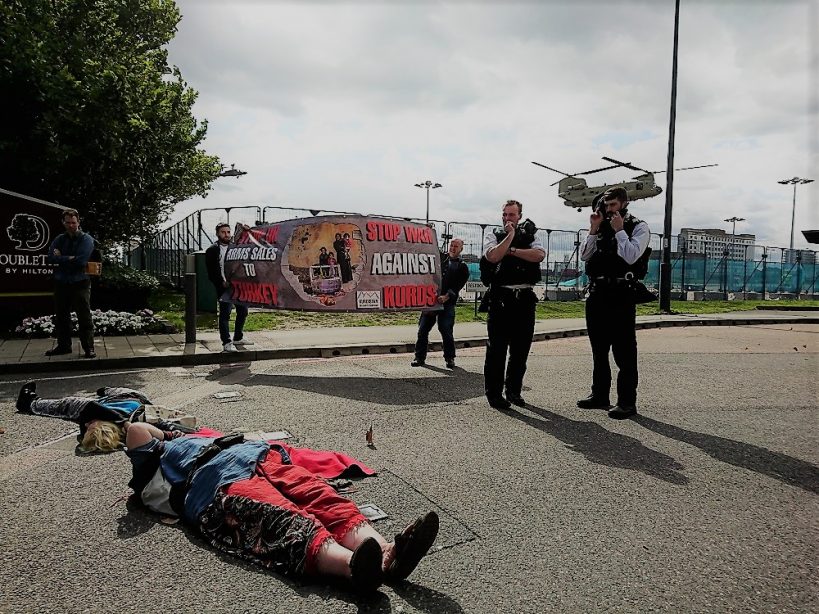 Meanwhile, activists blocked a lorry at the main east entrance to the ExCeL centre. People formed a ‘peace circle’ and managed to halt the vehicle’s progress for most of the afternoon: 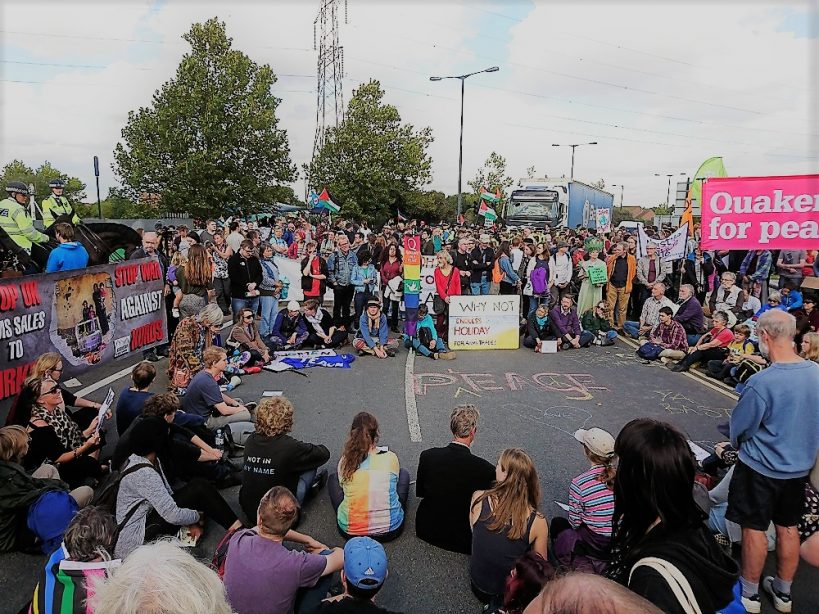 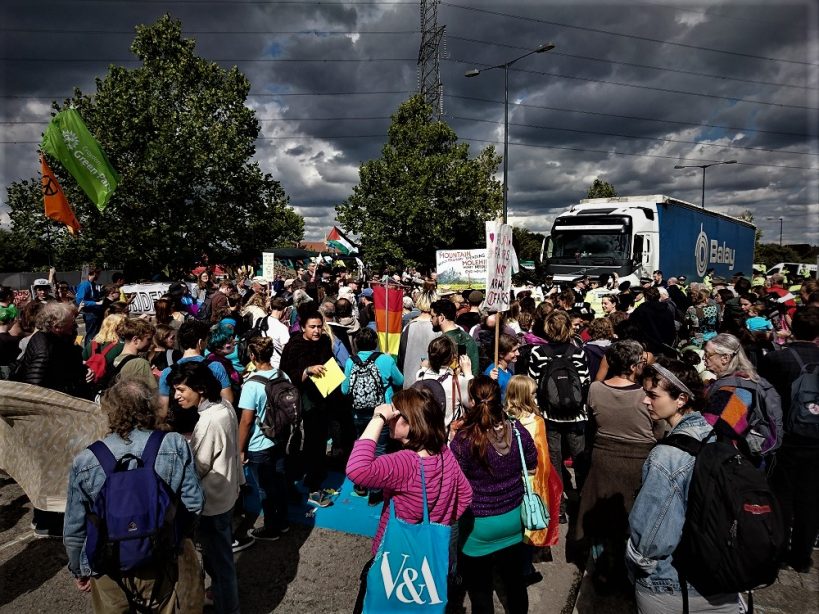 But activists accused the police of ‘heavy handedness’:

And as one activist tried to lock himself onto the underside of the lorry, crowds chanted “shame on you!” at the police: 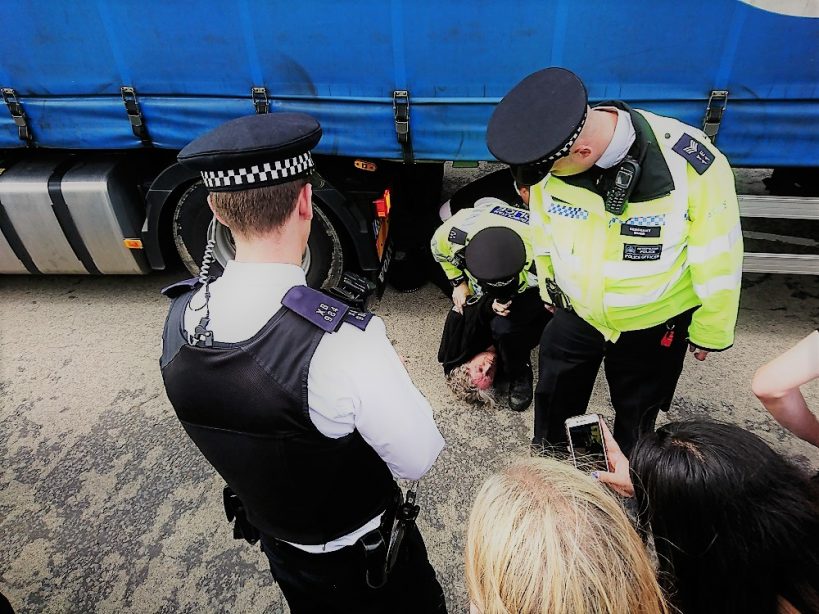 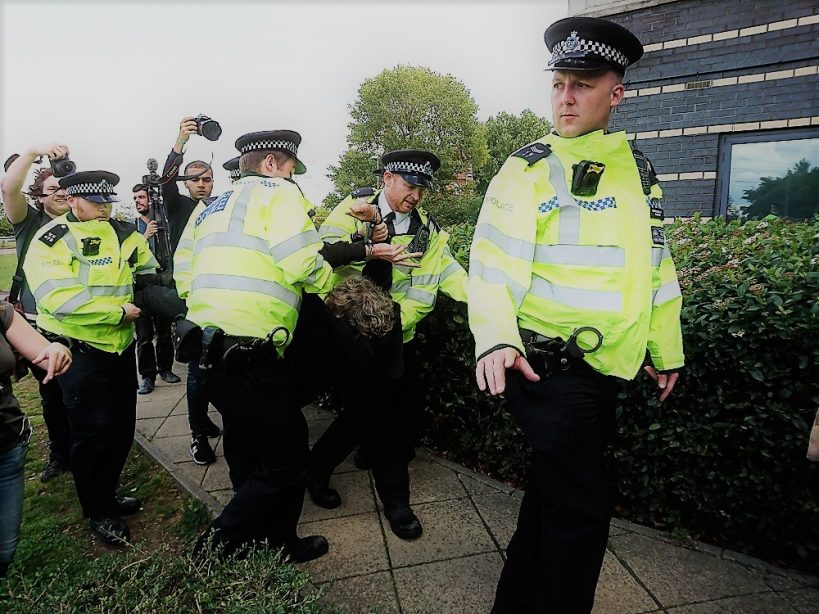 Simultaneously, a blockade was also happening at the west entrance. One activist, who would only communicate with police through the medium of mime, also locked himself onto a lorry: 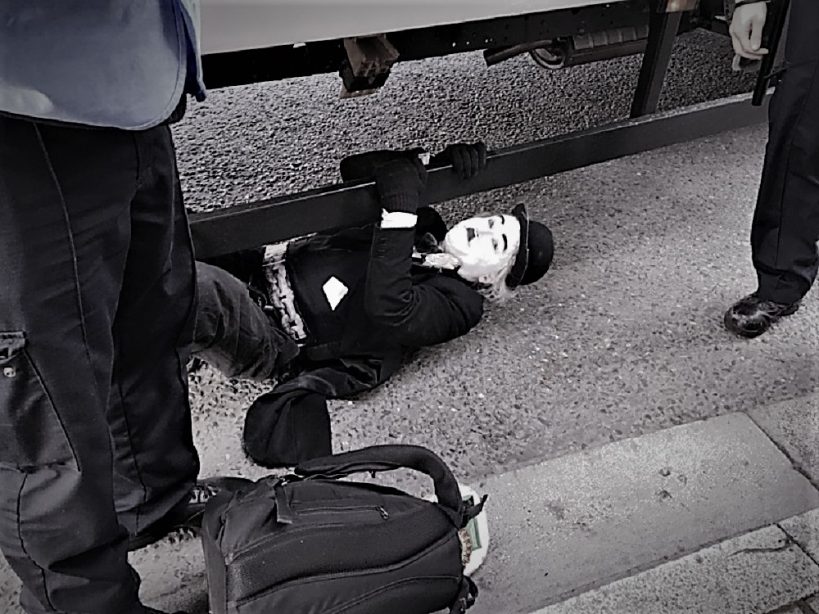 Meanwhile, The Canary witnessed the police seemingly pushing one activist off their bike: 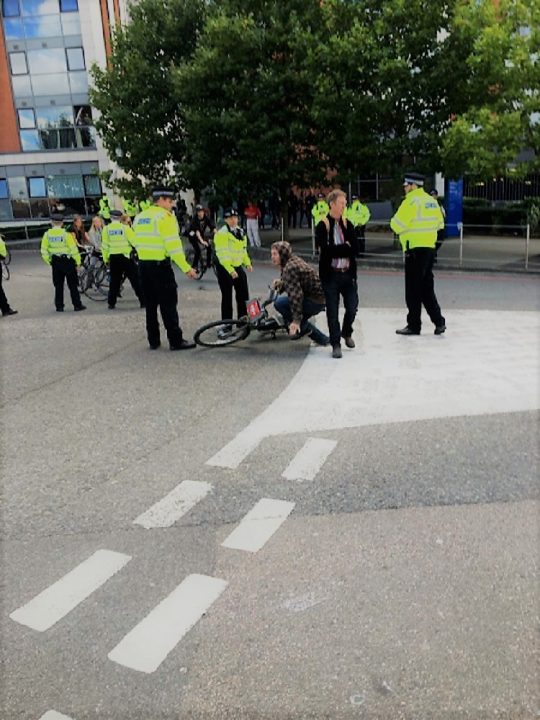 There were more than one hundred police officers present. It seemed somewhat excessive, given the location (off any main roads), the nature of the event (a ‘peace’-related ‘carnival of resistance’) and the number of children on site. They made numerous arrests, including of one elderly gentleman, according to the designated legal observers at the event. These observers are there to ensure that activists are treated within the law: 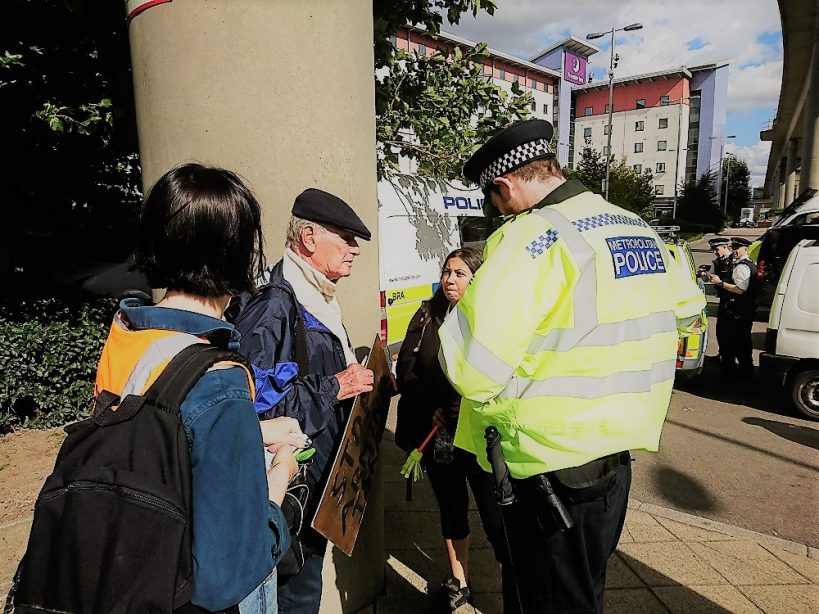 On three occasions The Canary saw the police either blocking the work of, or completely ignoring, the designated legal observers. But even with such a heavy presence the police still struggled to shift the lorry blockade: 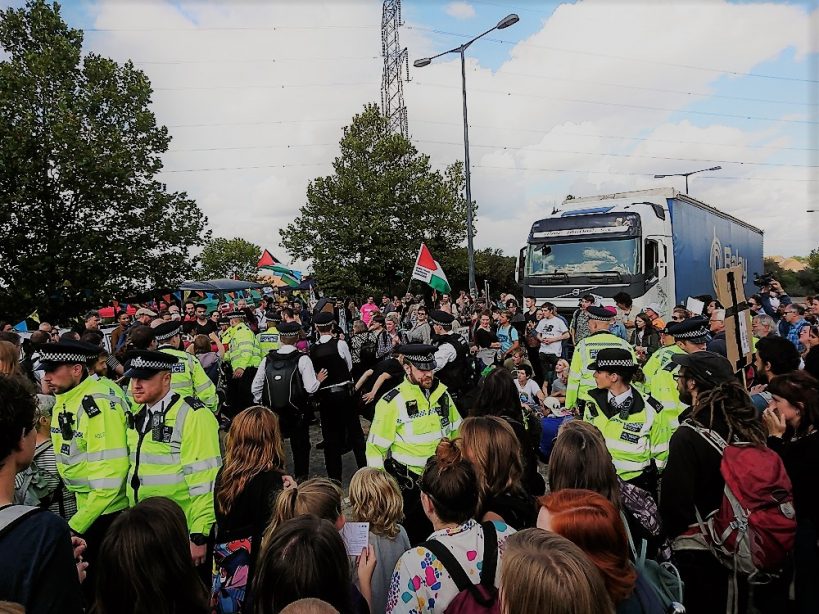 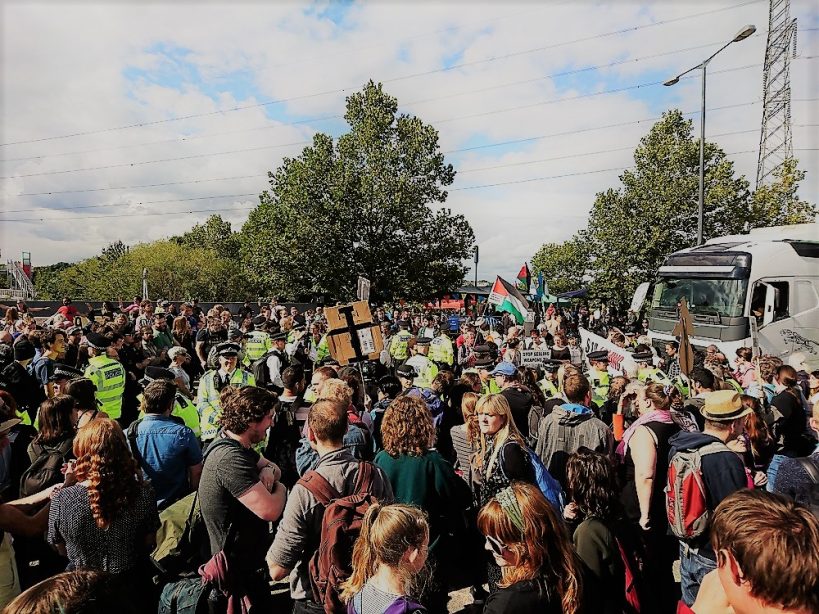 Overall, activists blockaded both the east and west entrances for more than six hours.

With the actual fair not opening until 12 September, there are several days of action left. Sadly, at the event on 9 September there was a distinct lack of politicians and no coverage from the BBC. But the STAF action should be commended. It has been, and continues to be, one of the most effective and visible annual resistance events in the UK.

– Read more from The Canary on Stop The Arms Fair.

– Join the continuing action against DSEI.

Featured image and additional images via The Canary/Emily Apple