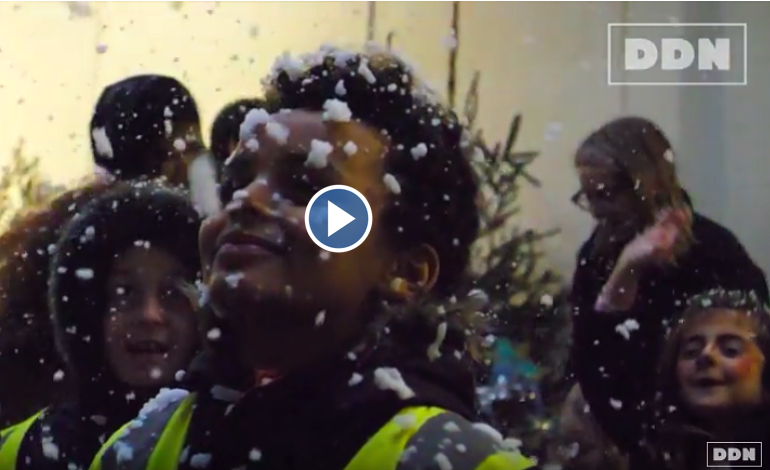 Coinciding with a sad week, six months after the Grenfell Tower fire, a nearby project held a Christmas party to help children replace some of the awful memories of the blaze with more joyful ones, putting smiles firmly back on their little faces.

The founder of the community-run project ‘Kids on the Green’, Zoe LeVack, tells Double Down News [0:00]:

There was an epic failure on behalf of the local authority. They vanished. So we did for ourselves and we still are. And that’s become the culture in Latimer [Kensington] now.

Holding their Christmas party with ‘Eric the skateboarding dog’, Father Christmas, and the Fire Brigade who brought along their fire truck, Kids on the Green’s mission is to provide a “calm space” for children, young people, and families impacted by the Grenfell Tower fire.

When we’re together, that makes us stronger. During a hard time like this… we have to have something that cheers us up because we can’t be sad all the time.

Much of what Kids on the Green does involves art therapy. As LeVack says [1:46]:

Art therapy is very important for the children because it gives them an outlet. A lot of the children haven’t been able to communicate the grief and trauma they’re going through. So, through art therapy, they have been able to do that.

A little girl who’d lost three of her friends, 8 years old, hadn’t spoken at all. She’d literally just become dumb with shock and trauma. She came out onto Kids on the Green and she picked up a hula hoop and she started hula-ing. And she just started talking about her friend, one of her friends that had died. And her mum was just like: ‘Wow, this is what we’ve been wanting her to do for the last couple of weeks’.

Still fighting for justice, it’s community projects like this that are holding people together. With the state allowing people, including young people and children, to fall through the cracks, it’s clear that projects like Kids on the Green really deserve support.

– Support Kids on the Green.

– Read more articles on Grenfell Tower from The Canary.