As Farage celebrates the return of the blue passport, a British satirist chimes in [VIDEO] - Canary 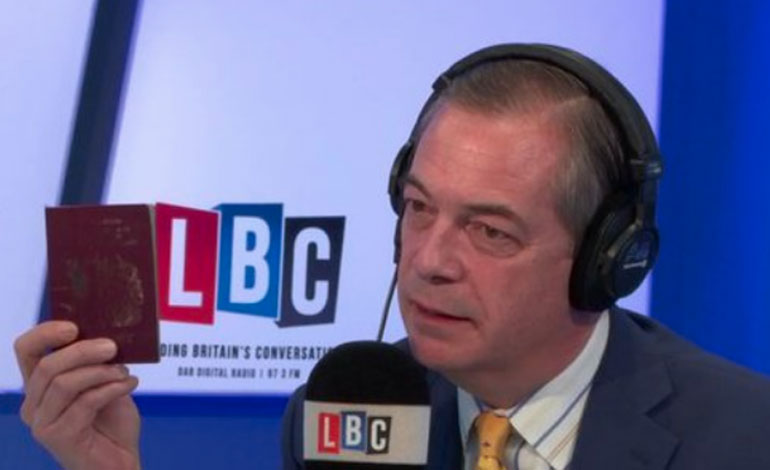 Former UKIP leader Nigel Farage says he “couldn’t be happier” that the British passport is becoming blue again, replacing the burgundy design, which was brought in in 1988. But while Farage and other Brexiters are celebrating this as a victory, some aren’t as enthusiastic. John O’Farrell, a British satirist and previous lead writer for the BBC’s Have I Got News For You, tweeted about how the colour change is nothing to get excited about.

A symbol of “becoming a proper country again”

Farage argues that the colour change, as well as the removal of the words ‘European Union’, is by no means trivial and insignificant. As he told fellow LBC presenter Nick Ferrari:

I remember in 1988 when they abolished the British passport. They didn’t just change the colour of it, they put two words at the top of it: ‘European Union’. That said to me 30 years ago that our political class were basically selling out our country, our nationality, our individuality and so I fought them.

To be honest with you, the words matter more than the colour. Taking off the words ‘European Union’ matters more than the colour. But… going back to that navy blue colour, what it says is that normal service has been resumed – we’re becoming a proper country again, that is what Brexit is going to bring us… Frankly, I couldn’t be happier this morning.

LBC presenter James O’Brien received [0:02] a message from a pro-Brexit listener who believes the change in passport design means he has regained a “little piece of… identity” and said it was a shame O’Brien didn’t have that sense of belonging. The LBC host responded [0:32]:

I don’t understand how you can talk about a sense of belonging while claiming that it depends on the colour of your passport.

What if you were colour blind?

James O'Brien's epic take on those celebrating the return of the blue passport pic.twitter.com/mV1guXzJ34

Maybe there’s more to a passport than its colour

At present, British citizens are entitled to travel anywhere in the EU simply by presenting their passport… But once the UK leaves the EU, British citizens will become “third country nationals” with no automatic right of admission.

Travel will be made more complicated because the EU has developed the European Travel Information and Authorisation System (ETIAS). This will require all non-EU citizens “to register their details and intentions online”. The ETIAS requirement is not due to Brexit, but leaving the EU does mean it will affect Brits.

So we will have a blue passport, which for many Brexiters is a symbolic victory. But others are more concerned about the practical issues, such as whether the British passport will make travel easier or more difficult after Brexit.