Tories have relentlessly attacked a single mum who was forced to use food banks [VIDEO, TWEETS] - Canary 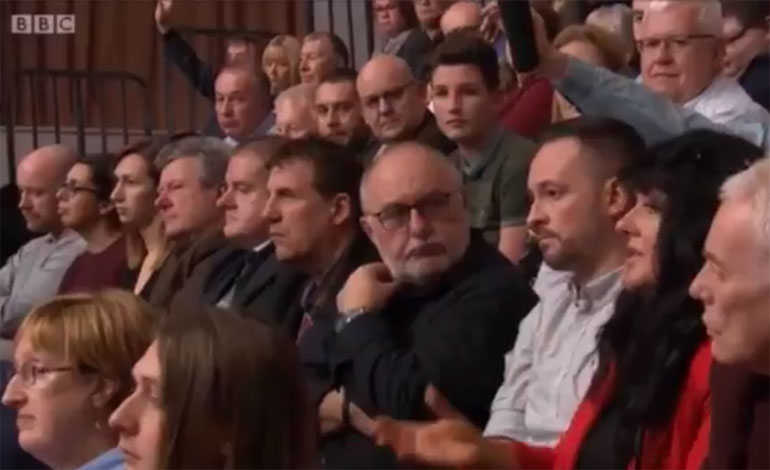 On 14 December, Samantha Thompson asked a poignant question about food banks on BBC Question Time. Conservative MP Nicky Morgan’s response was, as The Canary previously reported, far from satisfactory. But since then, Thompson – a single mother of three – has been widely criticised online by a Conservative councillor and right-wing groups.

Thompson was very clear on Question Time that she “had” been someone who struggled and “had” used food banks in the past. She explained:

I’ve worked all my life and suddenly I became ill.

At no point did she say that she still used food banks. But the response that followed on social media did not take these facts into account.

Speaking exclusively to The Canary, Thompson said she lost her business following a “breakdown”. And she was referred to a food bank in August 2016. She said:

I just remember crying in the job centre. And then someone gave me food bank vouchers. When we got to the food bank… I just thought ‘how have I actually got here?’

A study by the Trussell Trust found that: “Mental health conditions affected people in 1/3 of households” referred to food banks.

Graham Galpin is a Conservative councillor in Ashford, Kent. Shortly after Question Time aired, he tweeted:

Galpin had “no comment” when approached by The Canary. In a statement sent to the BBC, Galpin said: “The comment wasn’t targeted at any particular individual – if she feels it was, then I apologise unreservedly.”

Thompson disagrees and told The Canary:

How stupid do they think we are? He’s twisted that round and tried to worm his way out.

Activate UK, a “grassroots” organisation for “young conservatives”, also sourced photographs and online reviews posted by Thompson. And it said:

But the ‘evidence’ it used was posted after Thompson actually used food banks. Despite this, the group continued:

Thompson has since received harassment and abuse on social media. Activate told The Canary:

We condemn any abuse or attacks of a personal nature and encourage all our followers across the spectrum to keep any political discourse mature and polite, this being said that does not absolve someone from receiving an appropriate level of scrutiny when they enter the political arena.

Thompson spoke out, drawing from past experience, for the thousands forced to use food banks. The tweets slamming Thompson were then picked up and spread further, and presented as ‘news‘.

This Christmas, “record numbers of children” will eat from food banks. And as this film from The Canary shows, the reality of using food banks is harsh.

Thompson has been publicly accused of lying. And her physical appearance has been ‘debated’ by strangers. She told The Canary this caused “panic attacks”.

Use of food banks has soared under this government. And now, the people using them are being abused. It’s time to get the Tories out and time to end austerity.

– Demand an end to austerity.