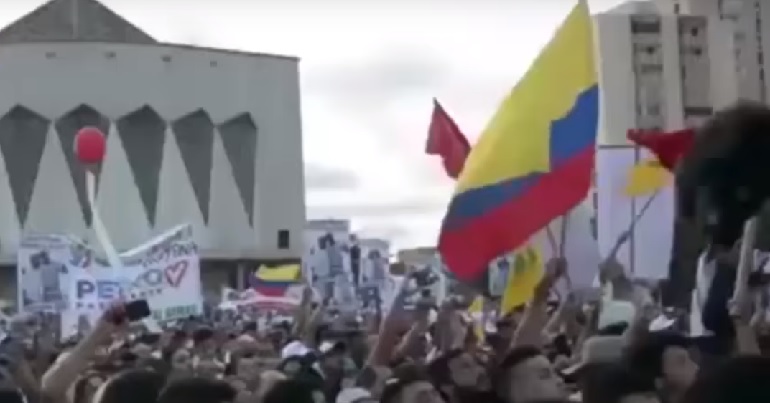 Colombia is one of the “longest standing” US allies in South America. It will hold presidential elections on 27 May. But it will do so amid assassination attempts, a humanitarian crisis, and public disenchantment with its political system.

Ahead of the elections, The Canary spoke to the secretary of the Colombia Solidarity Campaign, Andy Higginbottom. We asked him about the current political context, Sunday’s elections, foreign corporate interests in Colombia, and how to show solidarity with the Colombian people.

Colombia has long been home to one of the world’s biggest humanitarian crises [pdf]. It is also one of the most unequal countries in Latin America, with high poverty rates. Its decades-long civil war, meanwhile, has seen:

And despite a peace agreement in recent years, the Norwegian Refugee Council reported on 22 May 2018 that:

Since the peace agreement signing between FARC-EP and the government in November 2016, over 150,000 people have been displaced – the equivalent of one person every 4 minutes…

Over 7.3 million people are internally displaced in Colombia today.

Indeed, Colombia has long been competing for the world’s top spot for internal displacement with warzones like Syria. As the Internal Displacement Monitoring Centre (IDMC) explains [click ‘Drivers of Displacement’]:

Locals have also been threatened, displaced and killed by armed groups that have taken control of mines, which are important sources of revenue, especially to mitigate the volatility of cocaine prices. Private-sector coal mining has also directly displaced people in Colombia through land acquisition and indirectly through environmental contamination.

Higginbottom provided more context. He said the ongoing violence is in part because [2:44]:

to a large degree, the violence in Colombia has been perpetrated by far-right groups, not far-left groups.

Since the signing of the peace agreement, hundreds of social leaders have reportedly been killed, as violence against them has risen. The UN has expressed its concern about these murders.

Higginbottom also gave more information about the polarising ex-president Álvaro Uribe Velez – a hard-line right-winger who served from 2002 to 2010 and had alleged ties to drug cartels. The George W Bush administration in the US pushed billions of dollars of military aid his way and supported his intensification of Colombia’s civil conflict.

While the US has criticised and sanctioned other Latin American governments for similarly low turnouts, there’s essentially silence over Colombia.

A Petro win in the elections, Higginbottom insisted, would be “potentially a huge game-changer in Colombian history”, because “there has never been a left-of-centre president”:

Colombia, Higginbottom insisted, is [0:04] “very much a combination of the two ‘neos’ – of neoliberalism and neocolonialism”:

Regarding whom the US and the UK would like to win Colombia’s elections, Higginbottom pointed out that Colombia is [0:22] “probably the longest standing ally of the United States in South America”. And he thus suggested that Duque – the status quo candidate – is a clear favourite:

Bogotá professor and historian Renán Vega Cantor has previously described the US as “a direct actor in the [Colombian] conflict owing to prolonged involvement”. We can see a result of this strong link in the fact that Colombia will soon join NATO as a “global partner”. It will be the first country in Latin America to do so.

The dangers of the electoral process

It’s clear that the pro-corporate status quo will continue if Duque wins the elections. As Higginbottom explained:

It’s also clear that there will be resistance from powerful forces if they fear the status quo will change. According to Higginbottom, if Petro moves into a second round of the election (or wins) [0:14]:

His life will be completely in danger… There’s already been one assassination attempt against him. And the whole political culture of the right in Colombia is… to carry out operations of this type.

There is a long history of politicial assassinations in Colombia. In the 1980s, for example, a left-wing party – the Patriotic Union (UP) – formed during peace negotiations. But as teleSUR reported, “right-wing paramilitary groups, often working with state backing”, murdered “some 5,000 UP members and supporters” in “a systematic campaign of assassination and terror”. One 2012 tribunal called this a “political genocide”.

In this challenging context, Higginbottom spoke about how people around the world can show solidarity with the Colombian people:

And answering a question about the British MPs who have shown the most solidarity with Colombian people in the past, Higginbottom named the current leadership of the Labour Party:

Colombia has a real chance to move forwards on 27 May. But whether it moves to the left or not, we must all be aware of the impact multinational corporations are having in the country; and we must all show solidarity with the social movements standing up for their rights. Because whoever wins the elections, the current situation is not going to change overnight. And the groups seeking to bring about that change will need as much support as they can get.

– For more on mining activities of companies in Colombia, see here, here, and here.

– Learn more about the world’s electoral systems, and decide for yourselves which you think are the best.

– Support The Canary if you appreciate the work we do. Also see previous Canary articles on Colombia.